"What's in a name?
That which we call a rose by any other name would smell as sweet
...
or as vile."

Quote adapted with apologies to Shakespeare

Awaj is an Amharic term for a proclamation of law made by government. When one is dealing with civilized government the concept of law carries with it not only the the weight of law but also of necessity, precedent, and hopefully some concern for the common good.

Rather than being outlets that simply spew forth awaj after awaj, civilized governments also have institutions such as courts and parliaments that allow for accountability and the expression of the common will.

The idea is that no one is above the law and that the full force of government is not only done in the name of its citizens but is bound to serve their interests. If not there will be a reckoning with other agents of the law and ultimately the citizens.

But what do you do in a society where the law itself and all of its supporting structures are meaningless?

Ethiopia today is such a place. Government, the economy, ownership, law, and even the most basic definitions of reality or even Ethiopia itself are simply expressions of the will of Ethiopia's dictator and owner - Meles (a.k.a. Legesse) Zenawi.

We are continuously astounded when critics of the government refer to the institutions perverted or created by Meles in terms and language that should be reserved for civilized institutions. One would expect cadres to do so but why should anyone else?

There are no independent institutions of any kind in Ethiopia. It is high time that discourse about Ethiopia and its dictatorship reflect this. How about the ultimate guarantor of freedom, the right to own land and the fruits of one's labor?

There are no rights to private property so all of the millions in the countryside are his serfs who may lose their land at the whim of his cadres or have it given away to his businessman with power or foreigners with checkbooks.

Trotsky, one of Meles's ideological and practical mentors said that "where the state is the sole landlord - opposition means death by slow starvation." Ethiopian suffering means power and money for Meles. Ferenjis see the starving and never wonder why it is happening they just funnel billions through Meles hoping some of it will help somehow.

Meles is the head of a party apparatus that defines Ethiopian government, enriches him and gives him absolute power. Indeed it is a revolutionary feudal aristocracy more grasping and vile than any other Ethiopians have ever had to deal with. No affair in the public or private realm is beyond their reach.

The entire economy from grain and coffee through fake dam projects and silly wind farms are beyond the profit and control of the Meles gang. Fake institutions like the Commodities Exchange and false tribal / regional economic activities cover the fact that Meles owns his party, government, massive government monopolies, and the economy at every level.

This incestuous mess polices itself and has a vast army of tribal militias and secret police to enforce its rule. Actually, we are talking about a culture of lies and brutality at every level. Ethiopia's constitution, laws, and pronouncements are all meant to serve Meles Inc. and his eternal enrichment and power. That is all.

Speaking of this law moving through parliament or that bail hearing before a court is nonsense. Meles knows it, his cadres know it but for some unfathomable reason the sincere critics of Meles take those fake institutions more to heart than anyone else.

A nation is being throttled to death because of the will of Meles.

Always in the name of the people or at least some people. Those dictators did all of their crimes perfectly legally. After all they controlled the courts and the assemblies. Does that make them any less criminal?

But ... they personally decided what the law was so the law was meaningless. Just because Meles has named institutions to carry out his will does not mean that his institutions deserve to be taken seriously enough to name them and discuss their workings as though he was running a civilized government.

As we have said so many times before the civil contract of Ethiopian society that defines all relations between the governed and the rulers has nothing to do with Ethiopians. It is a matter of negotiation between Meles who has tens of millions of hostages and ferenjis who fund him in the name of the hostages.

No one should pretend otherwise.

more of your friendly neighborhood ethiopundit ...

This is probably the longest time we have gone without a post. Don't worry - the cadres haven't gotten to us but we have just been plain lazy. We will be back in the coming week with more of your friendly neighborhood ethiopundit. 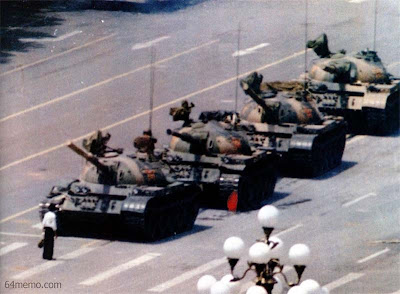 By the way, the Tiananmen Square Massacre was launched twenty years ago today after weeks of pro-democracy protests. In Meles Zenawi's Ethiopia the killing would have begun even more earnestly on the very first day.

Ferenji sanctions against China's Communist Party were far more sincere than any notice that has been made of the dozens of such massacres Ethiopians have seen in that time and the thousands of courageous men and women of every ethnic group who have been slain.

There is also the enduring matter of the daily horror of grinding poverty and oppression that has made suffering a tradition. This despite the utter dependence of Meles Inc. on ferenjis for its daily survival.

Despite the sincere evil of their government, the Chinese were at least allowed to develop over that time because the bosses see the creation of wealth in China as being in their own personal or group interest.

Meles & Co. have a common interest in eternal rule with the gang in the Forbidden City but have taken the begging / creative dishonesty 'development' approach to finance their rule at whatever cost to Ethiopians who are no more than hostages to ferenji good will.

Meles and the gangsters of Arat Kilo see any potential for the creation of wealth or sign of vibrancy in Ethiopians outside of their control as a mortal threat. They are absolutely right. Such men and women are like vampires - they can't survive any light at all.

Meles's revolutionary feudal aristocracy actually controls far more of Ethiopian life than China's has since the end of the Cultural Revolution while dominating and draining what little economic activity there is as they siphon aid. It is all sent abroad for safekeeping in ferenji banks and real estate.

So remember the massacre in China everyone knows about and wonder about the continuing massacre in Ethiopia that is simply accepted.