They Had So Much Things To Say 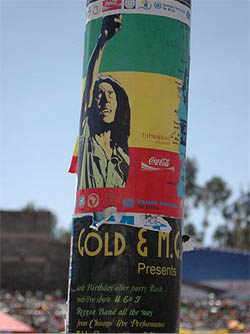 These are the big fish
Who always try to eat down the small fish,
just the small fish.
I tell you what: they would do anything
To materialize their every wish.

Poster at Meskel Square concert in 2005.

In 2000 there was a funeral. Twenty five years after his overthrow and murder by the Dergue, the Ethiopian Emperor Haile Selassie was buried at Addis Ababa's Trinity Cathedral. The Ethiopian government that in turn overthrew the Dergue in 1991 refused the Emperor a state burial and

reviled the [E]mperor's reign describing him as a tyrant who enslaved the peasants by imposing a feudal system.

"Selassie's reign was marked by its brutality and extreme oppression of the Ethiopian peasants," the government said.

The government said it will continue with its efforts to recover money the emperor allegedly deposited in foreign bank accounts.

The Patriarch of the Ethiopian Orthodox Church was in attendance along with members of Haile Selassie's family and thousands of mourners. The government refused to honor the Emperor in any way.

Fast forward to 2005. On the occasion of Bob Marley's sixtieth birthday a massive concert called Africa Unite is held in Addis Ababa's central Meskel Square with thousands in attendance from all over the world.

This was the EVENT to announce to the whole world how hip Ethiopia's government was and how free, connected and open was the country it had by its grace created. Along with the carefully timed RETURN of the Axum Obelisk this was all prelude to the gift of the ELECTION that was to crown Meles Inc. as the permanent favorite among African Rennaisance Leaders deserving of billions in foreign aid and good press.

It didn't work out that way but a look back is worth it anyway. Official word was that

with the eager cooperation of the Ethiopian government because

Ethiopia, the spiritual home of Rastafarianism, was chosen by Marley's family to host the official event, and is organised by the Bob Marley Foundation, the UN children's agency, the African Union and others.

Notice reality being spun here by the careful emphasis from the government and from the BBC reporter that Ethiopia was put on a pedestal by Marley and that Ethiopia is the spiritual home of Rastafarianism.

The original Rastas drew their inspiration from the philosphies of Marcus Mosiah Garvey (1887-1940), who promoted the Universal Negro Improvement Association (UNIA) in the 1920s. The organization's main goal was to unite black people with their rightful homeland, Africa.
[...]
After spending nearly a decade in the United States and Great Britain, Garvey returned to Jamaica in 1927, where he spread his political views among the black working class. He assured his followers, "No one knows when the hour of Africa's redemption cometh. It is in the wind. It is coming. One day, like a storm, it will be here." He told blacks to "look to Africa for the crowning of a king to know that your redemption is near."

In 1930, Prince Ras Tafari Makonnen was crowned the new Emperor of Ethiopia. Upon his coronation, he claimed for himself the title of Emperor Haile Selassie (Power of the Trinity) I. This announcement was a monumental event that many blacks in Africa and the Americas saw as the fulfillment of Garvey's prophecy years before. After the crowning of Selassie, the Rastafarian movement gained a following and officially began.

Many Rastafarians still refuse to accept that the Emperor could die and revere him as a living diety. Bob Marley was the most popular practitioner of Reggae music that grew out of Rastafarianism.

So how did Marley's sixtieth birhday come to be celebrated with no mention of the man that inspired Marley and whom he glorified with his life and abundant talents? Probably because if the Emperor had taken centerstage with Bob, the Ethiopian government would have been displeased - and they probably made this point clear to organizers.

That might have meant admitting that he was not an incarnation of evil - even in the presence of paying foreigners and curious reporters that could simply not be done. It might raise too many issues.

Such as the reality that
----peasants today have no right to own land and are indeed eternal serfs of an effective one party feudal state with no chance of a change.
----brutality and oppression of peasants is a hallmark of current government whose human rights record is no longer favorable in comparison to the Dergue.
----more than thrity years on there is no hint of any foreign bank accounts of any kind with the Emperor's money while structural corruption in Ethiopia today is at an all time historical high.
----that this government holds more unrivaled power and wealth in its hands than any other in the country's history.

We are not arguing here that the Emperor's reign was a Golden Age. However, in comparison to any of his successors it certainly represented several orders of magnitude improvement in the most basic elements of governance. 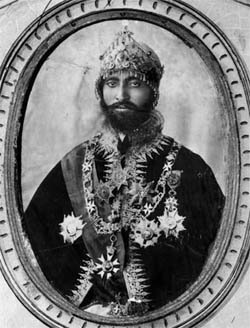 This man remains at the core of Rastafarianism and should have taken center stage at the concert last year. None of us at ethiopundit are Rastafarians but it is clear that the complicit denial of Haile Selassie was like imagining Christianity without Christ or Buddhism without Buddha.

That the Ethiopian government pretended otherwise is understandable ... after all the comparison makes them look bad. Actually, the current government doesn't always come ahead in comparisons to Mengistu either. That the foreign organizers of 'Africa Unite' thought to separate Ras Tafari from Ethiopia for the sake of a concert venue is not to their credit.

We must assume that Bob Marley would have known better. After all regardless of which government hosted the event for whatever reason - it was exactly governments like Meles Inc. that Marley sung against.

Image of Ras Tafari circa 1923

As if rewriting the history of a whole religion wasn't enough here is one last bit of government spin of the concert on the tribal front. The Rastafarians in Ethiopia seem to have issues with government shared by Ethiopians in general. This insightful Scotland on Sunday article from the reporter behind the Meskel Square blog begins

ETHIOPIA’S tiny Rastafarian community launched a string of bitter protests against the country’s government yesterday, casting a shadow over huge celebrations marking the 60th anniversary of the birth of their Reggae icon Bob Marley.

A list of long-standing grievances, calling for full Ethiopian citizenship and the return of acres of land they claim were given to them by Haile Selassie, their spiritual leader and Ethiopia’s last emperor, was aired by Rastafarian leaders.

The calls struck a jarring note ahead of a huge Bob Marley concert due to take place in the capital Addis Ababa today, part of a month’s worth of "Africa Unite" exhibitions, performances and conferences organised in the Rasta legend’s memory.
[...]
We have three main issues. First we want the right to commercially develop front pieces of our land on the main road through Sashamene. Secondly we want the return of the full 200 hectares of land that was given to us. And thirdly there is the issue of citizenship. It is a scandal that we have second or third generation children here in their twenties who are still seen as foreigners.

This is a typical story for all Ethiopians, either they are insecure becasue they can't ever own land anyway or their land was taken away from them while local ethnically based authorities are making all the decisions - in this case commercially developing the most valuable bits. Or they just feel generally hopeless before an unsympathetic government.

Another of the very few articles to go anywhere in search of a back story is from Reuters addresses some of these issues before being spun off from the story by the familiar ethnic misdirection of Ethiopian governance (with some help from official minders?).

Even Rastafarians living in the community of Shashamane, donated to them as a gift by the emperor, complain that members of Ethiopia's Amhara tribe look down on them, or government red tape frustrates their development projects.

"The Amharas, they've got a problem, they're a bit racist themselves," said Jahlisha Israel, head of the Rastafari Nazarite Research Centre in Shashamane.

Notice how the government, which controls every aspect of the Rastararians' lives and of every Ethiopian is somehow being let off the hook in preference for a convenient scapegoat in the form of the whole Amhara tribe.

The Rastafarians live in a region controlled by Oromo ethnic government at the direction of the central government totally dominated by a revolutionary party that claims to represent all Tigrayans while the Haile Selassie himself was both Amahara and Oromo ...

Confusing? No not really ... the problem is Amharas ... right? Actually, the real problem is a government based on ethnic division to begin with that seeks to set Ethiopians against each other and that searches for villiany and blame in categories of its own people numbering millions.

Who knows what the spin will be next time? Who will be the scapegoat and who may be set against them? Oromo, Amhara, Tigray, Gurage, Sidamo, Somali or Rastafarian - all are pawns under great pressure in the Ethiopian government's great game of divide and rule while trashing tradition. 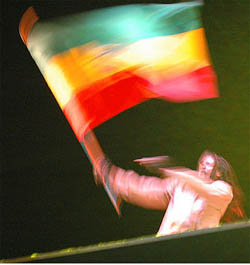 I'n'I nah come to fight flesh and blood,
But spiritual wickedness in 'igh and low places.
So while they fight you down,
Stand firm and give Jah thanks and praises.

Bob Marley, lyrics from So Much Things to Say, Exodus.

'Flag carrier during the performance by the Marley sons at 'Africa Unite', a concert in Addis Ababa marking Bob Marley's birthday.'

One of the most very offensive notions in current Ethiopian politics that was planted and is most cherished by the regime is the notion that Ethiopia is a random collection of tribes locked in mutual combat that only the EPRDF could force a truce on. Actually, scorn of all those 'Amharas' or hatred of all those 'Tigrayans' or revilement of all those 'Oromos' or of anyone else is music to the ears of Meles Inc.

Tribal divide and rule is what the 'federal' system is all about and along with the kleptocratic excuse for an economy, eternal beggar status and the very nastiest bits of Communism (both atavistic and post-modern) ruthless opportunism of every stripe defines governance today exactly. This government knows that they can only manage to rule a weak and divided Ethiopia so they like to keep things that way as a matter of policy.

Ethiomedia links to a Memorandum on the current situation in Ethiopia from a number of Tigrayan critics of the government. We have made this point often, that Tigrayans are simply the first victims of Meles Inc., and we do so most recently in the post In Whose Name..

Weichegud is back with an excellent take on the recent Congressional Hearings. The links to the individual bits of testimony are fascinating - along with the statements from Foggy Bottom and the Hill, they seem to hint at a shift in American policy - or at least a glance in the right direction.

Satisfy My Soul [ego] has a recipe for disaster that Ethiopians have been force fed for most of a decade and a half now.

Meskel Square is as good as ever.

Booker Rising is simply one of the best.