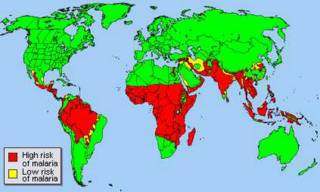 
From the Foreign Dispatches Blog some strong words on the subject of Malaria, Mosquitoes, DDT and environmentalists

"Whenever I've said in the past that many environmental activists are actually pleased at the ubiquity of trypanosomiasis and malaria on the African continent, seeing it as a good thing for wildlife conservation, I've been accused of either lying or engaging in exaggeration... "

Read the rest at Putting Mosquitoes Before People.

Of course environmentalists as a group do provide a valuable service in the needed worldwide struggle over development and its limits. Increasingly, though, extreme 'green' pronouncements have begun to resemble a civil religion. In rich countries the government, business interests and an informed populace can tame the fatwas of extreme environmentalism.Thus there is no damage to standards of living while great strides can be made in preservation. In the United States there have been very successful efforts to combat pollution since the birth of the environmental movement in the 1960s.

In poor countries, however, basic economic and social policies of development are often hostage to 'green' demands that would have no chance of actually interfering with an economy or life expectancy in the rich world. The pressure is felt through the manipulation of foreign aid, loans and the simple denial to provide or allow means such as DDT on the market.

In Ethiopia the term "tigabugna" refers to someone who is sated after a meal and avails himself of opportunities to meddle in the affairs of others. The extreme 'greens' of the rich world are too often such people. Curiously guilty about the relative luxuriousness of their lives they seek poor people to do their penance for them by staying poor.

A good antidote to extreme 'greens' is

"Bjorn Lomborg, a former member of Greenpeace, has been branded a traitor by the international environmental movement. His crime? He debunked almost all of its claims about the earth's perilous state."

Michael Crichton, the popular author, has a fascinating take on the 'green' civil religion that is a must read and a source of much of the above. We mention how Africa is going through like issues with genetically modified crops in this post.

In the 1950's, 60's and early 70's, DDT was used to reduce malaria around the world, even eliminating it in places like Taiwan. But then the growing recognition of the harm DDT can cause in the environment - threatening the extinction of the bald eagle, for example - led DDT to be banned in the West and stigmatized worldwide. Ever since, malaria has been on the rise.

The poor countries that were able to keep malaria in check tend to be the same few that continued to use DDT, like Ecuador. Similarly, in Mexico, malaria rose and fell with the use of DDT. South Africa brought back DDT in 2000, after a switch to other pesticides had led to a surge in malaria, and now the disease is under control again. The evidence is overwhelming: DDT saves lives.

But most Western aid agencies will not pay for anti-malarial programs that use DDT, and that pretty much ensures that DDT won't be used. Instead, the U.N. and Western donors encourage use of insecticide-treated bed nets and medicine to cure malaria.

Bed nets and medicines are critical tools in fighting malaria, but they're not enough. The existing anti-malaria strategy is an underfinanced failure, with malaria probably killing 2 million or 3 million people each year.

DDT doesn't work everywhere. It wasn't nearly as effective in West African savannah as it was in southern Africa, and it's hard to apply in remote villages. And some countries, like Vietnam, have managed to curb malaria without DDT.

But overall, one of the best ways to protect people is to spray the inside of a hut, about once a year, with DDT. This uses tiny amounts of DDT - 450,000 people can be protected with the same amount that was applied in the 1960's to a single 1,000-acre American cotton farm.

Lo and behold! Greenpeace and the World Wildlife Fund support the return of DDT. Kristoff highlights bureaucratic inertia as the reason for the reluctance to use it.