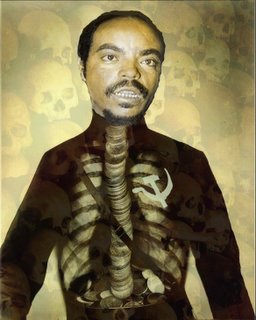 Ethiopia is the very poorest, one of the most corrupt and one of the least free nations on earth. It is ruled by a bloody despot and his professional class of revolutionary feudal aristorcrats whose aim is absolute and eternal power. It is exactly that will to power that has brought Ethiopia so low.

Per capita income has fallen drastically in the past fourteen years from already horrible depths. Per capita foreign direct investment is amongst the very lowest in the world and is falling. In fact costs for the Sheraton Hotel alone represent one-third of all foreign investment since 'liberation' from the Dergue.

Per capita grain production has been falling steadily and every year up to fifteen million people face starvation without foreign aid and tens of millions of others face malnutrition. Even those levels of failure are sustained by mass use of fertilizers bought from abroad and sold by the party's business empire with no competition.

Planned mass indebtedness secondary to inflated prices and for politically determined access to land are used by party cadres to punish dissent. There is thus little incentive to invest in land and improve it. At the same time nonsense schemes like 'Agricultural Development Led Industrialization' and 'Revolutionary Democracy' are supposed to create some distant paradise in the same manner that has failed mankind at such cost in wasted lives and time everywhere else in the past.

Foreign aid, loans and remittances from Ethiopians abroad who live in systems that allow them to prosper amount to one-third of GNP - indeed much of the government budget itself is financed by grants from abroad. Those factors alone and a natural increase linked to population figures accounts for why Ethiopia did not become the poorest nation on earth years ago instead of now.

If all of the government's claims about economic growth were anywhere near true then how can the state of the economy and its great fall relative to every other nation on earth be explained? Easily, like most pronouncements of the government it is all a tissue of lies sustained by the absence of morality and accountability in government and willingly tricked observers abroad.

Beyond the whole pretense of democracy the constant barrage of lies and cynical deceit is deafening. How many governments on earth would be allowed to get away with 'disappearing' an opponent and then cooperating in a Western search for the murdered victims whereabouts?

Similiarly we are told that the massacred innocents where "throwing grenades". That is about as believable as the 'discovery' of opposition caches of arms and the likelihood of an investigation into the deaths. What is there to investigate? The government killed them in towns, cities and the countryside repeatedly in the very same manner didn't it?

Party and government own the economy at all levels, particularly where hard currency is involved, through monopolies and a non-transparent web of crony enterprises. Government and business are all part of the vanguard ruling party's empire and are each indistinguishable from the other.

The same folks control the media, the parliament, the election board, the judiciary, the secret police, security and armed forces with no constituency except themselves and the West. They know no allies ... only contempt for those they have bought and broken into servitude or vicious enmity for those whose submission still eludes them.

Government policy is dedicated to basic policies such as tribal divide and rule as well as the absence of private property rights that have made suffering and oppression a matter of enduring and unchanging tradition. No amount of foreign aid can ever change that when people are not allowed to develop themselves the same way billions of other humans have.

This is all done against the will of Ethiopians but with the partnership of those abroad who help keep Ethiopia's despot in power. They all should know that the time for anyone to blame Mengistu, warped memories of centuries of history or even cruel fate for the essentially bad policies of Ethiopia's government are long past.

All of the above feed Meles gold in the name of the people whose misery he authors and in return he spouts junk about democracy and free markets as the bodies and broken lives pile up for all to see.

One simple point is key. No society on earth that denies private property rights has ever been prosperous, free or stable. This is not a matter of debate or theory but fact. The dictator's Western allies seem to be striving to make sure that the very same factors that made them rich are denied to Ethiopians.

By doing so the Prime Minister's Western allies have quite purposefully removed the very concept of popular accountability from any aspect of government behaviour. They have effectively replaced the Ethiopian people as the government's constituents.

The foreign policy of any country is based on self interest and we are intolerant of the blame game, where every African fault is tied to a Western conspiracy. Such a worldview dehumanizes Africans by seeing them as incapable of making reasoned and moral decisions.

However, what can be said when a dictator can only rule because of very generous Western support with no accountability? Meles today is as much a creation of Brussels and Washington as Mengistu was of Brezhnev era Moscow.

No one's good intentions can change that fact and even the most inattentive student of history should have expected this mess from 1991. All that is being served by the status quo is the dubious illusions of very short term Western interests and of course, those of Meles.

Ethiopians are doing their best, if the West will not help perhaps it can just get out of the way and stop supporting this government or at a minimum make it accountable for its actions.

Calls for 'both the opposition and the government' to both refrain from violence are as ridiculous as calling on the 1970s Soweto South Africa or 1960s Montgomery Alabama victims not to provoke their oppressors.

To even use the word democracy in the Ethiopian context today, or to pretend any sort of free market will ever exist, or that this government that was born and sustained by instability will ever be a partner for stability is knowing participation in a lie or at the very best delusion.

It is time for the West to choose sides. With whom do the interests of Western citizens and taxpayers converge ... Meles & Company or tens of millions of Ethiopians?