The World According to Ordell & Meles 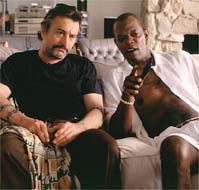 In Tarantino's Jackie Brown, Ordell schools Louis on the fine art of gun running. Like Meles, he is fond of the AK-47

When you absolutely, positively, gotta kill every motherf****** in the room, accept no substitute.

That there is the Chinese one. I pay eight-fifty and double my money.

While he is a fine actor overall, Samuel Jackson's forte really seems to be playing criminal psycopaths. As the crackhead son of a preacher he did that demonic dance in Jungle Fever begging his brother for drug money lest he have to rob 'some old lady'

Later on as a cool demon let loose from hell itself in Pulp Fiction he perverted a Bible passage to terrorize his victims, later waxing all philosophical-like that

I been sayin' that shit for years. And if you ever heard it, it meant your ass. I never really questioned what it meant.

Basically, entertaining and genuinely disturbingly portraits of evil are how we really remember the actor. We've met him in real life and he was quite charming, did not threaten or actually kill anyone nor did he even curse, so we really must assume he is just a good actor.

As you can imagine dear reader we are about to relate the previous paragraph to the villiany of the current Ethiopian government any minute now so be patient ... but first, a word about Jackie Brown. It is one of those movies we have seen in whole and in part too many times to count that like the Godfather or Groundhog Day, never gets tiring.

In the movie Pam Grier's Jackie Brown has been bailed out of jail by Samuel Jackson's (not) criminal mastermind Ordell Robie. Fearing that she will turn into a witness against him, he wants to buy her silence with her death. So he shows up at her apartment.

Now for a quote from a BBC article about the post-'election' violence in Ethiopia, also known as one of a series of Addis Ababa Massacres. Really, this will make sense in the end.

The Ethiopian government has accused EU observers of contributing to post-election violence during which about 40 people died.

It said the EU mission "illegally and secretly leaked information" to the opposition, prompting protests in June

When the government, as naturally as the scorpion who stings the frog in the old fable, starts killing ... it is the fault of the foreigners who stopped cheering long enough to notice the election was a fraud.

What about the 70 million hostages?

Well, they were all loyal to the government or were Rwanda type genocide perpetrators or Dergue loyalists or Eritrean agents or kulaks or supporters of Lord Voldemort or victims of the West depending on whichever set of talking points the Gibee had sent out any particular day.

Basically like the official responses to academic criticism from the West and governmental criticism in the form of the EU election report, silly overheated rhetoric, wild implausible charges, pretentious bouts of reason and simple insults rule the day to day of the government's information war efforts.

Ethiopians can simply be killed, if they are in Ethiopia. Ethiopians abroad? Well, they might just have relatives back home who can be threatened or attempts can be made to intimidate them with intelligence (as in spying not high IQ) networks run out of Ethiopian Embassies abroad. (RICO anyone?)

Foreigners are a more difficult. Essentially, making them feel like there is no distinction between getting into an argument with a vicious drunk and discussing Ethiopian politics is used to get them to shut up.

Or as in a classic mob racket, foreigners are informed that if they don't play along with respect and protection money for the government that all those Ethiopians will just have to suffer ... and it is all the foreigner's fault not the government's.

So lets visit with Jackie Brown and Ordell Robie. Remember, he is there to kill her. He keeps turning down the lights and places his leather glove hands at her throat. But Jackie has anticipated this, Ordell stops, nervous all of a sudden

ORDELL Is that what I think it is?

JACKIE What do you think it is?

ORDELL I think it's a gun pressing against my d***.

JACKIE You thought right.. Now take your hands from around my throat, n****.

Ordell flashes his hustler's smile and lets go. Jackie turns Ordell around, gun firmly in his back, and pushes him against the wall.

ORDELL What the hell you doin'?

JACKIE Shut your ass up and grab the wall!

Jackie has Ordell against the wall and is frisking him the way a cop would. She finds the .22 pistol in his pocket.

ORDELL Now, baby, that's got nothin' to do with you. I just carry that. You been listenin' to them cops too much.

JACKIE The cops didn't try and strangle my ass.

ORDELL Damn, Jackie, I was just playin' with you.

JACKIE Well, I ain't playin with you. I'm gonna unload both these motherf******, you don't do what I tell you. Understand what I'm saying?

She shoves both guns in Ordell's back.

JACKIE I said, you understand what I'm saying

JACKIE Go sit over in that chair.

Ordell moves over to a chair across from the couch. Ordell still tries bullsh** ...

ORDELL I'm tellin' you, those cops been f*****' wit your mind. They turn black against black, that's how they do.

That last is the money quote of the whole scene: cops ... pit black against black. Now take a look at the BBC quote above once more. Isn't that exactly what the Ethiopian government is saying that EU pits Ethiopian against Ethiopian

The obvious point is of course that like the cops in the movie, the EU is far more interested in defending the helpless of any kind than Ordell or Meles are. If you think we are stretching this point take a look at another scene from the movie.

Ordell has just killed Beaumont, whom he bailed out before Jackie and he is driving around with a body in his trunk (that got in there willingly to begin with!) to show his mentally challenged former roomie and fellow criminal, Louis.

Once again we will give you the whole scene. Obviously, if you wanted short posts you wouldn't be reading this blog. Anyway, Ordell's big, black Oldsmobile is parked outside at night and Lois approaches while the power window on the driver's side comes down, revealing a comfortable Ordell sitting back in his seat looking up at Louis.

ORDELL You know what your problem is, Louis?

Louis doesn't say anything, he just puts his hands in his pockets.

Ordell opens the car trunk. Trunk opens showing Beaumont shot in the chest with half his head blown off. Louis looks inside, see Beaumont, looks at Ordell, then back to Beaumont.Ordell closes the trunk.

LOUIS Who was that?

ORDELL That was Beaumont.

LOUIS Who was Beaumont?

ORDELL An employee I had to let go.

LOUIS What did he do?

ORDELL He put himself in a situation where he was gonna have to do ten years in the penetentiary, that's what he did. (taking out a Viceroy and lighting it up) And if you know Beaumont, you know there aint no way in hell he can do no ten years.

And if you know that, you know Beaumont's gonna go any goddam thing Beaumont can to keep from doin' those ten years including telling the Federal government everything they want to know about my ass. Now that, my friend, is a clear case of him or me.

And you best believe it aint gonna be me. You know what I'm sayin'? You gonna come in on this with me, you gotta be prepared to go all the way. I got me so far over a half-a-million dollars sittin' in lockboxes in a bank in Cabo San Lucas. Me and Mr. Walker make us one more delivery, I'm gonna have me over a million.

ORDELL So we on the same page then?

While the folks at the EU or in Washington aren't as intellectually challenged as Louis, their ongoing support of Meles makes them every bit as morally challenged.

Just as Louis knew then they know now (and since the beginning really) exactly what Meles Inc. is about. There is no more pretending about 'rennaisance leaders' or any such nonsense. It is clear to all that to have his way ...

Meles will shoot any Ethiopian, and a thousand more Ethiopians look just like 'em to stay in power. Meles will use a gun and remove anyone stopping him from having absolute power ...

Billions in unaccounted aid for and fawning uncritical cooperation at the Ethiopian dictatorship has produced a bloody political system where Western aid donors are the only constituency of the regime and its support system.

You could put Ordell in a Saville Row suit and Versace shades, he could become best friends forever with a real live British Prime Minister, visit the Oval Office (not alone though) and even get invited to a G-8 summit.

Ultimately, though, it would still be all about who he killed to arrive at that curious and absurd place of international respectability where one is treated well for ostensibly representing the millions whom one mistreats in turn.

It is far too late to pretend otherwise ... Are Meles & Brussels & Washington watching the same movie or not? 70 million Ethiopians can't just change the channel when it all gets too ugly.