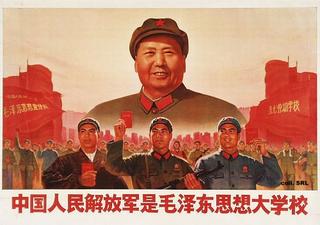 This image from revolutionary democratic China is courtesy of one of the best sites on the internet, Stefan Landsberger's Chinese Propaganda Poster Pages.

One point the reader should always note when dealing with Ethiopian affairs and her revolutionary feudal rulers is that normal rules do not apply.

For example, well meaning people approach words and the concepts that underly them like democracy, elections, parliament, supreme court and election board with an assumption of sincerity or even of the presence of something vaguely recognizable as the institutions of a healthy society. When considering the pronouncements of Ethiopia's government all such assumptions must be suspended.

None of the above list of characteristics posessed of normal societies exist there but meaningless illusions of them do whose sole purpose is propaganda - totally in the service of filling government coffers and select private bank accounts with dollars, euros, pounds and yen.

It is essentially dishonest to use the words 'democracy' or 'elections' in any Ethiopian context. Truth and respect for Ethiopians, and indeed humanity, demands derision directed towards those who corrupt those words and an appropriate sense of tragedy over the fate of 70 million long suffering people.

It is a sign of gross contempt to expect Ethiopians to be satisfied with anything less than the real thing or to pretend that they want less than all other peoples on earth.

There is a definite moral element to using the concept of democracy too loosely. For any observers, native or foreign, to pretend otherwise means that they must believe one of the following:

The most generous label that can be ascribed to such observers is insincerity.

Ethiopia's despots are engaged in an elaborate ritual of balancing their boots on the collective national neck while grinning and dancing for foreigners whose low expectations and money keep them in power. Interested and friendly ferenjis of every stripe should make no mistake - the whole dismal performance is about getting at your tax dollars and does not help any but a few Ethiopians atop a pyramid of suffering.

Even friends of Ethiopia are often so desperate for any hint of transparency that they are forced to report releases from 'living dead' organs such as the election board as though they have any kind of meaning at all beyond serving the interests of the ruling politburo.

Thus, despite every manner of lies, damned lies and statistics out of official circles we are probably safe in assuming that this set of communist dictators won't just give up power while we aren't posting or even change their behavior in any meaningful way. Brute force, corruption and trickery are meant not only to guarantee dictatorship and its benefits for a few but also to keep Ethiopia weak and dependent on handouts so that she can't resist.

That way the only constituency of note is the club of donor nations. After all the revolutionary aristocracy has 70 million hostages and the dubious threat of mass tribal and religious anarchy to hold against the continued financial support of the West - which expects no better from Ethiopians.

If security issues drive support for the Ethiopian government while governments look the other way and hold their noses - it should be made clear that no security will result in the end. The failed state that is being created from a potentially vibrant and healthy nation by Ethiopia's rulers will guarantee future terror and catastrophe.

The guiding national ideology of revolutionary democracy is lovingly stitched together from bits of Marx, Lenin and Mao with the same horrible deficit of morality that was behind the creation of Frankenstein's monster. Embarassment at international reaction to such a dated and silly term has meant that it hasn't been officially acknowledged for some eight months now - but the ruling party is still a 'revolutionary democractic' front whose behavior certainly remains true to the revolutionary cause.

The other remaining rapacious dinosaur regimes in Cuba and North Korea have found sexual tourism and nuclear blackmail to be reliable sources of finance so they don't have to play games to please aid donors. Despite all airs and appearances, primordial totalitarianism, tribalism and the refuge of permanent beggar status remain what Ethiopia's revolutionary feudal aristocracy is all about.

Above all one should note that there is nothing - no crime nor infamy nor horror that Ethiopia's revolutionary feudal aristocracy would not gladly commit to stay in power even an extra day. Any concept or assumptions of civilized governmental behavior must be put aside when considering 21st century Ethiopia.

Not a single district where observers where present voted for the ruling party / government. Remember this whenever you are tempted to take any election results announced by the same party / government seriously.

Our recent posts on the right sidebar and our archives are a rich source for information and links and are organized thematically. Reccomendations for a profound understanding of Ethiopia's current plight including the following:


the back story of Ethiopian 'democracy'

For more on the 'election' and its bloody aftermath our post 'election' analysis can be found at Revolutionary Democracy in Action, continue in Revolutionary Measures and We don't need no votes! onto Common Sense and Hatred is the Basis then Cadres 'n ze Hood as well as Criminal Minded and A Bodyguard of Lies. Later entries are Ordinary Mortals, Scorched Earth, La Lutta Continua !, The Tragedy of Low Expectations and The Historic Elections of May 2005.

An account of the recently past 'election' season connected with commentary can be found at Politburo Knows Best VII - Let A Hundred Flowers Bloom.

A pointed summary of the fertile ground for despotism and the poor prospects for democracy given current Ethiopian government is at Politburo Knows Best IX - Dictatorship. The back story of revolutionary democracy and an introduction to our detailed Politburo Knows Best series and other relevant issues can be found at just like Rasputin.

The leaders of the opposition like Hailu Shawel, Beyene Petros, Merera Gudina and Berhanu Nega carry the hopes of a proven majority of millions of every region, religion and ethnicity. They and the support they have generated are the greatest sign of hope in Ethiopian affairs in decades.

The following sites of the united coalition / opposition should be seen to appreciate what great improvements in governance await Ethiopians: UEDF, CUD, UEDP-Medhin, and AEUP. A fascinating overall analysis by an opposition leader can be found at Tiger by the Tail.


other blogs and news sources looking at this story are listed below. We generally make little effort to be timely in our posting but many of these below are both timely and/or routinely excellent.

Dagmawi sets a high standard. The gems hidden behind every title with no evident text such as Two Incompatible Objectives and The New Meles Five Point Peace Plan should be read. The latter has a breathtaking look at the politics of neuro-chemistry. Patterns of Turnout in the Ethiopian Election Part II and The Hijacked Election: Corrupted vote tabulation are absolutely required reading for appreciating the carnival of horrors that is democracy in Ethiopia.

Ethiopian Review has the inside story in a tireless pursuit of salient facts and the production of exceptional analysis. The case presented for the formation of an opposition shadow cabinet is convincing and well thought out. A young heroine pays the ultimate sacrifice tells the story of ShiBire Desalegn who was the first person to be killed when Meles Zenawi unleashed his forces following a peaceful protest.

EthioMedia has a wealth of level headed commentary and up to date news as well as a series of fine essays from many sources. It is a fantastic source overall and has comprehensive coverage of worldwide protests.

Weichegud ET Politics has wit, clarity and mastery of so many levels of issues, of ideas and of the meaning of events ... one of the most talented and thoughtful writers that we have come across in some time ... who keeps getting better and better.

Meskel Square is from a Scottish journalist let loose on the roof of Africa, who is having his Year of Living Dangerously.

Satisfy My Soul very observant, intelligent and original writing from Addis with essays like who let the guns out? and the irreverent Brother can you spare two dumps?.

Friends of Ethiopia Straight out of Brooklyn with a heart in Addis.

Ethiopian Paradox Yet another example of great writing and on target critique.

Gateway Pundit is on top of the story with coverage of the election aftermath and struggles for democracy everywhere.

Publius Pundit is following events and appreciates the struggle for freedom.

The Buzz Blog follows the story.

The Head Heeb is watching