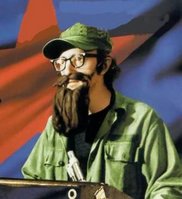 "Banana republic (or Bananaland) is a pejorative term for describing a country with a non-democratic or unstable government, especially where there is widespread political corruption and strong foreign influence.

It was originally applied to Honduras and is most often applied to small countries in Central America or the Caribbean whose economies were largely dependent on bananas for much of the 20th century."

In Woody Allen's wonderful satire of revolution and those it seduces, Bananas, the new revolutionary strongman of fictional San Marco announces to his captive masses that

From this day on, the official language of San Marcos will be Swedish. Silence!

In addition to that, all citizens will be required to change their underwear every half-hour. Underwear will be worn on the outside so we can check. Furthermore, all children under 16 years old are now... 16 years old!

The very same level of absurdity is amusing in San Marco but lethal in Ethiopia. Once again, this time in the first week of November, ordinary mortals have been shot down in the streets of Addis Ababa.

Here are some basic points to keep in mind during the flood of regime propaganda in the coming days to justify its bloody hands.

one The politburo / government / business empire is only fluent in the language of violence. Peaceful protest by the oppostion (the honking of horns and a boycott of the aforementioned business empire-government-party) had to be met with violence because the regime knows it has already lost all peaceful means of competition.

two When the subject becomes law and order all means become justified to defend peace. That is especailly so when law & order, peace, the will of the people and democracy are necessarily defined ahead of time as being identical to the pronouncements and interests of the Prime Minister.

three Just like all the arrests for terrorism or weapons caches of the past months - all acts of violence or evidence of such intent should be assumed to be instigated or planted by the regime. Every protester knows damn well that the regime is murderous and eager to shoot at unarmed innocents. For them to initiate violence makes no sense at all.

In all such cases alleged violent acts on the part of civilians should be assumed to be the acts of regime agents provacateurs or to be outright lies. No one benefits from violence besides the government.

four All accused from the opposition, Anna Gomez,, agents of Rwandan genocide, Al Quaeda, roving bands of rent seeking kulaks, old regime fuedals, Eritrean agents, Dergue remnants, Klingons onto Lord Voldemort that are put forward as planners or beneficiaries of violence by the government are by default totally innocent.

As we said, the regime only understands force and has been just waiting to make it the only game in town. It assumes that protest will lead to its overthrow because such is its accurate estimate of the real will of the people.

five The numbers of dead and wounded as well as arrested should be assumed to be far higher than all reports. Even more important what happens in Addis is a very restrained regime response to popular opposition.

In the countryside far from ferenji / aid donor eyes and ears the death toll as well as the numbers of maimed dissidents and destroyed lives are beyond estimation. The government has been burning a wide swathe in revenge for its electoral loss in May that makes any possible crimes in Addis very tame in comparison.

six Any revolutionary dictatorship, be it 'Communism of the Right' as in Hitler's Germany and Mussolini's Italy or 'Fascism of the Left' as in Stalin's Russia or Mao's China, has the power to do whatever it wants and to make anything legal or illegal that it desires.

There is literally nothing stopping the Prime Minister from making the Woody Allen speech at the beginning of this post. His rule is more absolute than any traditional ruler in history and only matched by that of Mengistu.

Therefore in the current Ethiopian form of governance based on the above examples, the very concept of law, order and constitutionalism becomes a tool in the service of dictatorship and has no independent meaning. Reality and truth become nothing but abstractions that justify and provide for the eternal will to power of the regime.

seven No normal rules of civilized governance assumed by citizens of governments worldwide apply to Ethiopia. The regime will literally do anything - any infamy or bloody deed or lying or cheating or stealing or murdering or massacring - to stay in power for even one more day.

Since it is correct to assume that such a government is unpopular it is safe to assume that only its threats are to be believed and none of its justifications or excuses for why it routinely kills its own citizens.

Words like parliament, election board, law & order, peace and government are generally assumed to have some popular purpose by well meaning people but in Ethiopia all such thoughts must be suspended. Everything from the government is evidence of artifice and violence guaranteed to provide eternal rule for the politburo - nothing more.

Back to the definition of Banana Republic given above from Wikipedia - in Ethiopia the cash crop is not bananas but it is the blood, sweat and tears of millions of suffering Ethiopians. This regime has institutionalized an era of eternal totalitarian dictatorship begun by the Dergue and has made the country the very poorest nation on earth, among the least free and most corrupt.

The pretense of elections and a market economy exists for the consumption of aid donors who are the regime's only constituency. Ethiopians don't matter to the regime except as hostages to Western security interests and pity.

Instead of fruit companies what keeps this regime's Banana Republic going is the thought that unless this government is supported by aid, that it will make its people suffer even more.

A horrible nexus of a bloody revolutionary feudal aristocracy, willingly gullible intellectuals in their ivory towers and short sighted governments keep Ethiopians from waking up from their revolutionary democratic nightmare.

Ethiopians are busy trying to help themselves. It is time for the world to take notice as it did in Apartheid era South Africa and find its interests in Ethiopian peace, prosperity and democracy - beyond rhetoric.

Thousands more Ethiopians will suffer and die while the opposition leaders will face torture and death unless the West makes it clear it will accept no such outcome and that Ethiopians are also humans who deserve to live lives that are not 'poor, nasty, brutish and short.'

Ethiopians who spent millenia fighting for independence from foreign influence and control - now have only such foreign interest to peacefully protect them from the results of the second generation of occupation by Totalitarian Communists.

The country won't know peace and prosperity until Mengistu's Scientific Socialism and the Meles's Revolutionary Democracy, which are at the root of national suffering today, are exorcised and all such nonsense is treated with the general derision and contempt they so deservedly get in Bananas.

Weichegud is as good as ever. Ethan Zuckerman is always a great read. Satisfy My Soul [ego] is a pleasure. Booker Rising and Foreign Dispatches too. And Publis Pundit and Gateway Pundit.