Doig's Ethiopia Stamp Catalogue has a rather complete pictorial history of stamps dating from 1895, images from a scrap book of a 1913 Russian / French visitor, and even a selection of brewery labels from the 1960s!

One fascinating thing to see at this site is the 'Star of Ethiopia' medallion and ribbon given by Emperor Menelik to the members of the first American mission to Ethiopia as well as images and the story behind the event. 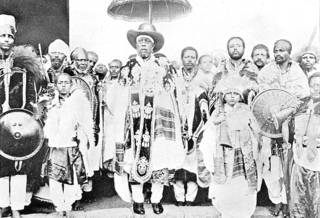 The arrival of Menelik and his entourage 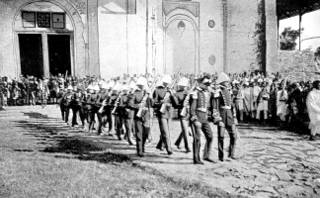 Meetings with Emperor Menelik II were most cordial, being held in the Aderach, or audience hall [of Menelik's palace, even today the seat of government]... The meeting was likely Ethiopia's first with an outside power that was only interested in commerce, with no hidden political agenda. The first Treaty was signed between Ethiopia and the United States on December 27, 1903.

The story is told by Robert P. Skinner, Commissioner to the mission, in his book "Abyssinia of To-Day", subtitled "An Account of the First Mission Sent by the American Government to the Court of the King of Kings (1903-1904)". The text of the treaty is on the same page.

Ethiopian-American relations certainly grew more complex over the course of the 20th Century but this glimpse of mutual innocence is interesting.