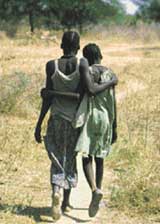 Akuac Malong (left), age 13, walks home to her village, Madhol, in southern Sudan. She says she was kidnapped and held for seven years as a domestic slave in northern Sudan. Source.

There are more slaves today than were seized from Africa in four centuries of the trans-Atlantic slave trade. The modern commerce in humans rivals illegal drug trafficking in its global reach—and in the destruction of lives.

infoplease has an article about modern slaves

Sometimes referred to as bonded laborers (because of the debts owed their masters), public perception of modern slavery is often confused with reports of workers in low-wage jobs or inhumane working conditions. However, modern-day slaves differ from these workers because they are actually held in physical bondage (they are shackled, held at gunpoint, etc.).

According to Anti-Slavery International (ASI), the world's oldest human rights organization, there are currently over 200 million people in bondage.

Today there is Slave Trading on Africa's West Coast with up to 200,000 children a year sold off. Chattel slavery (slaves owned as personal property) thrives in Sudan where in 1993 the U.S. State Department estimated that

up to 90,000 blacks are owned by North African Arabs, and often sold as property in a thriving slave trade for as little as $15 per human being ... Physical mutilation is practiced upon these slaves not only to prevent escape, but to enforce the owners' ideologies.

According to an ASI report: "Kon, a thirteen-year-old Dinka boy, was abducted by Arab nomads and taken to a merchant's house. There he found several Dinka men hobbling, their Achilles tendons cut because they refused to become Muslims. Threatened with the same treatment the boy converted."

Child "carpet slaves" in India are

kidnapped from their villages when they are as young as five years old, between 200,000 and 300,000 children are held captive in locked rooms and forced to weave on looms for food. In India—as well in other countries—the issue of slavery is exacerbated by a rigid caste system.

There are shackled laborers in Pakistan

there are still roughly 50,000 bonded laborers in southern Singh. Many of those freed now reside in the city of Hyderabad in makeshift camps. Most are afraid to return to their homeland, however, for fear they will be recaptured and enslaved again.

In the Dominican Republic

the collection of slaves for the busy harvest season is more random. The Dominican army, with the support of the State Sugar Council (known as the CEA), "hauls Haitians off public buses, arrests them in their homes or at their jobs, and delivers them to the cane fields".

At anti-slavery.org (Anti-Slavery International) we see that

Slavery exists today despite the fact that it is banned in most of the countries where it is practised. It is also prohibited by the 1948 Universal Declaration of Human Rights and the 1956 UN Supplementary Convention on the Abolition of Slavery, the Slave Trade and Institutions and Practices Similar to Slavery. Women from eastern Europe are bonded into prostitution, children are trafficked between West African countries and men are forced to work as slaves on Brazilian agricultural estates. Contemporary slavery takes various forms and affects people of all ages, sex and race.

Although slavery has existed for thousands of years, changes in the world's economy and societies over the past 50 years have enabled a resurgence of slavery. Three trends have had the most impact:

The population explosion has tripled the amount of people in the world, with most growth taking place in the developing world.

Rapid social and economic changes have displaced many to urban centers and their outskirts, where people are powerless and without job security. Millions have become vulnerable to exploitation and slavery.

Government corruption around the world allows slavery to go unpunished, even though it is illegal everywhere.

Slavery exists in many different forms around the world. Two characteristics make most slavery today different from slavery in the past: slaves today are cheap and they are disposable.

Millions of economically and socially vulnerable people around the world are potential slaves. This "supply" makes slaves today cheaper than they have ever been. An average slave in the American South in 1850 cost the equivalent of $40,000 in today's money; today a slave costs an average of $90.

Since they are so cheap, slaves are no longer a major investment worth maintaining. If slaves get ill, are injured, outlive their usefulness, or become troublesome to the slaveholder, they are dumped or killed.

The BBC reports that the UN's cultural organisation, Unesco, has set 23 August as International Day for the Remembrance of the Slave Trade and its Abolition. 2004 is already Slavery Abolition Year.

Events are being held worldwide to mark the abolition of the slave trade and to highlight the fact that millions still live as slaves in all but name.

Let us hope that more will be done than remembering. Well ... it looks like the U.S. is doing more than anyone else in recent memory. According to the VOA

Around the world, between six-hundred thousand and eight-hundred-thousand people are estimated to be trafficked across international borders each year. Experts say eighty percent of victims are women and girls. More than half are forced into sexual servitude, others into forced labor. The United Nations says that the trafficking of human beings is now the third largest source of money for organized crime, after weapons and drugs.

President George W. Bush says that countries that fail to act against human trafficking face possible sanctions from the U.S., the World Bank, and the International Monetary Fund

American threats seemed to have worked to some extent

“Last year at the United Nations, I called on other governments to pass laws making such abuse a crime -- and many have risen to the challenge. In the past year, twenty-four nations have enacted new laws to combat trade in human lives. Thirty-two are now in the process of drafting or passing such laws. As a result of these efforts, this year nearly eight-thousand traffickers were prosecuted worldwide. Two-thousand-eight-hundred have been convicted.”

The message is getting out about human trafficking. “We’re serious,” says President Bush.

There are millions of slaves out there who need an international effort. American financial clout is potent, but not enough. Tragically, no one should hold their breath waiting for the rest of the world to do more than have events at the U.N.