Tsehay and a Roundel History

This is the third in a series of posts about the Ethiopian Air Force. The second described the involvement of two African Americans who either commanded the Air Force or served in it during its early days.

The first described the Potez 25 back in 1933 and one of the first Ethiopian pilots who flew that machine. That plane did not have any of the familiar form of national markings but did have an Imperial Lion painted on the side next to the name of a Prince (?) Makonnen.

This Meindl/van Nes A-VII (M7) (image from Insignia Magazine) is depicted as it was at Jan Meda in Addis Ababa in 1936. It has the green, yellow and red of the national colors painted on the rudder and wings. On the side is written the word Tsehay (Sun) which may be there because it is name of a Princess (?) Tsehay, one of Emperor Haile Sellassie's daughters.

This may be the same plane now in Italy whose return is being campaigned for along with other historical treasures. The new terminal at Addis Ababa / Bole Airport is to be its home after it is returned. Only one of the type was delivered, served from 1935 to 1936 and is described as being locally modified with new engines and wing flaps.

The first traditional roundel used by the then Imperial Ethiopian Air Force has rings of green, yellow and red around a yellow six pointed star that seems to be a stylized Star of David. One of the Emperor's titles was 'Conquering Lion of the Tribe of Judah', in addition the Imperial House traces its origins to King Solomon and the Queen of Sheba so that origin for the roundel seems likely. 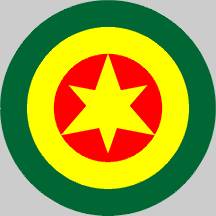 The older roundel was in use from 1946 and can be seen on this F-86F delivered sometime in the early 1960s. 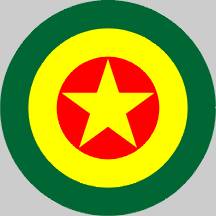 This MiG-21 depicted during the 1980s has the newer five pointed star roundel that came into use after an undetermined period when no star at all was used.

This site has a page dedicated to the history of Ethiopian roundels and has large stand alone images.

All military aircraft have markings on their sides and wings called roundels that provide for national identification - basically, to make sure who to attack or not. It all began during the first days of the First World War when the primitive planes of the day were used only for reconnaisance and occasional artillery spotting. Far above the trenches in France and Belgium, Allied and German flyers would encounter each other in the air and wave and otherwise behave like the 'gentlemen' they imagined themselves to be.

Rather soon, all concerned realized that they would not return home victorious before Christmas and settled in for the long bloody years ahead. In the air they started shooting at one another first with pistols, then rifles and finally with machine guns strapped to the fuselages of the planes or wielded by gunners.

Propellors got in the way and were at first armored so fire could be directed forward through them and aimed easily. Fokker and then the Allies developed interruptor gear that allowed the machine guns to mechanically coordinate firing with the propellor's spin.

After these and other technological advances such as improved engines, aerial warfare and the fighter plane were born and there has never again been anything genteel about it. Bright roundels and other colorful forms of personal and unit identification stayed on in all Air Forces until the 1980s.

It was then realized that modern infra-red guided 'air to air' (AAM) and 'surface to air' (SAM) missiles were sensitive enough to be guided not only by the hot exhaust of engines and friction heated leading edges of wings, but also by the differential heating and cooling of brightly painted markings to find their targets.

The U.S. began to use muted shades of gray for roundels and camouflage on almost all of its planes but other countries have continued to use large and bright national markings. One reason the U.S. no longer needs them is its likely dominance of any potential aerial combat and the low chance of fighting other American made aircraft. Even more important is the perfection from the 1950s of IFF (Identification Friend or Foe) equipment.

Airplanes that come to the attention of fighters or SAM crews by visual, infra-red or radar means can be electronically interrogated. The plane being tracked automatically responds with coded signals that identify which team they are playing on. This is a similiar technology to the transponders that most commerical aircraft use to identify themselves and their flight path to air traffic controllers.

Of course, military planes are far more choosy about who they respond to ... if it all.

Although there have been instances of 'friendly fire' among American forces in the air, they are very rare. This has not been the case for other nations such as the Arabs during the October War of 1973. A little known aspect of that conflict is the number of Arab fighter aircraft that were lost, not only to the Israeli Air Force but also to Arab SAMs.

As a result, Cairo and Damascus seldom used airplanes in support of ground operations or often avoided the immediate battlefield entirely. Many other countries just don't trust IFF*. The realization that anything electronic can be tricked probably determined overall Arab and Soviet doctrine to accept high levels of fratricide or to avoid having their own planes anywhere near their own SAMs for any reason. Most Soviet designed man-portable SAMs don't appear to have IFF equipment at all.

Most aerial combat today will probably happen at beyond visual ranges and even during close up dogfights when the opponent is in sight, a bright roundel may not be seen. Today, logic, communication and planning should prevent most errors of identification in air to air engagements but IFF will always remain essential for SAM crews.

However, error will always be a part of the horror of war. Ultimately roundels have stuck around because the standard issue human eyeball is the most reliable and error free instrument invented.

Roundels of the World has a clickable map with all the world's current national markings.

Air Vectors has detail on the origins of IFF and additional info here, here and here.