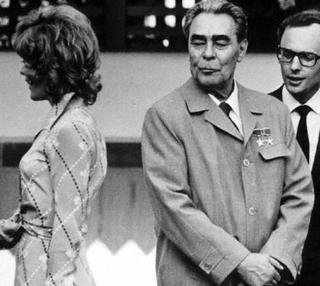 Leonid Ilyich Brezhnev, General Secretary of the Communist Party of the Soviet Union from 1964 to 1982 and all around El Supremo Big Cheese Super Cadre & Communist O.G. meets a living avatar of rapacious capitalist rent-seeking oppression of the people in the form of actress Jill St. John.

"The World Was Going Our Way: The KGB and the Battle for the Third World" is the

second volume of the post-war history of the KGB-based on the "Mitrokhin Archive" of secret documents purloined by the late co-author, a KGB dissident-surveys the Soviet spy agency's skullduggery in Africa, Asia and Latin America.

Historian Andrew portrays Russian policy toward the Third World as largely the creation of the KGB, which hoped that the spread of Soviet influence and revolutionary upheavals would make these regions the decisive Cold War battleground.

The entries in this book on Ethiopia are real tragi-comedy. A few glimpses of how Communists from home and abroad came to rule and ruin a country with such amazing potential are below.

On 9/77 Mengistu went to the Soviet Ambassador who kept a straight face while [Mengistu was] appealing for support.

The next bit is a quote from Mengistu about his first meeting with Brezhnev ... you will either laugh or cry or both ...

From that moment Brezhnev was like a father to me. We met another twelve times, always in the Soviet Union.

Each time, before telling him about our problems, I would say "Comrade Leonid, I am your son, I owe you everything."

And I truly felt that Brezhnev was like a father.

This was from an interview from the comfort of exile in Zimbabwe many years later. Are we surprised that he still remained loyal? Not really, the current government still feels the very same way about their common ideological forefather.

If Brezhnev was like a father he was certainly an abusive one. Soviet policy was based on keeping Ethiopia weak and poor because the Soviets had nothing to offer a confident and developing Ethiopia besides MiGs, AK-47s, second rate machinery and priceless multi-volume editions of Lenin and Brezhnev speeches.

Actually as we discussed in Unhealing Wounds and the Rise and Fall of the Ethiopian Air Force there was a definite policy of not training Ethiopians to use arms properly for the sake of breeding dependence.

Mengistu & Co. spent billions of dollars to pay for all those arms by borrowing and mortgaging and scraping up every resource and crop that could generate cash (real Western money, mind you - not Birr, and certainly not worthless Roubles). This was done amidst massive famines and the decay and purposeful destruction of all of Ethiopia's human and physical infrastructure assembled at such cost over the whole previous century.

The real issue here is not Mengistu alone but the importation of such nonsense to begin with, by a generation of self styled intellectuals and revolutionaries buzzing around within the Dergue and the current government.

Lost in a veritable supermarket of Traditional, Western and other ideas (some of which actually worked) much of a generation of educated Ethiopians never found their way past the ideological crap aisle.

It is tragic and terrifying that a glib catechism, itself the detritus of the West, could make so many otherwise bright people become utterly delusional. Ultimately, even opposition to the post-1974 Marxist-Leninist military dictatorship was largely an argument over who the 'real' Communists were.

The 'Scientific Socialist Military Junta Communists' were defeated by the 'Revolutionary Democratic Tribal Divide and Rule Communists' who represented a mild improvement only because they depend on the Western world (victorious in the Cold War and fitfully concerned with human rights) to rule.

If Mengistu could have covered up all of his boasting about actual abusing and killing folks by their millions he would have had a real shot at being the "Renaissance African Leader' for the 1990s and the new millenium. After all the current government was openly dedicated to Enver Hoxha's Albanian Communism far past the time that Mengistu was desperately trying to accomadate the West and allow for some economic privitization.

Papa Leonid would have certainly been delighted to personally adopt any Commnist who schemed or fought their way into power. Except for the slight problem that he was dead by then and Papa Gorbachev was presiding over a USSR destined for the trash heap of history because of its internal contradictions.

With cosmetic and grasping adjustments made because of the fall of the Dear Comrade Leonid's Soviet Empire, such as the grafting of monopoly and crony faux capitalist structures onto a Bolshevik-Maoist party, the current government continues the bloody tradition of Communism in ever growing poverty and ever shrinking freedoms.

There is no excuse for any of this and there never was. Any person who took even a minimal interst in history and politics or indeed anyone with common sense knew this was all bad for Ethiopia. For example, the people of Tigray knew very well they wanted no Communism and always had the strongest property rights in the country. That is why the TPLF lied to them about its ideology when it was being established.

To the Dergue to the TPLF to Me'ison to Ech'at onto the rest of the alphabet soup of Communist parties it should have been clear by 1974, actually decades before, that Communism was a dead end at improving human life in any way however sweet it sounded.

Even the ethnic component of all those parties was Leninist in nature - the whole nationalities issue was a way to serve Bolshevism by crippling outwardly patriotic, traditional or ethnically based rivals - using classic tactics of divide and rule.

That is ... unless they also recognized that Communism also provided the ultimate feel good rationalization for the absolute dictatorship of a few god like figures.

Spiritually and practically, all of them were right there with Mengistu on bended knee before Dear Comrade Leonid. 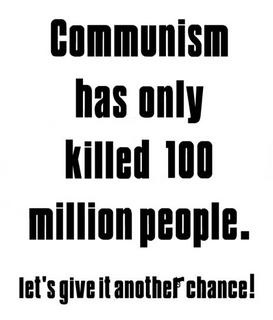 By the way the problem has always been Communism itself, not the implementation of it nor who led it nor any such lethal nonsense.

It should come as no surprise to readers that ethiopundit considers the religion of the church of Marx and his prophet Lenin to be the very worst thing that ever happened to Ethiopia. The battle against that mental slavery continues today.

Ethiopian Review has links to Soviet & East German documents from the 1970s relating to their joint colonial venture in Ethiopia.