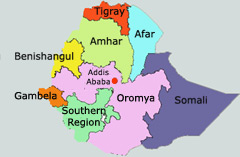 Map of Ethiopia showing the country´s administrative regions which are based on and named for their predominant ethnic / tribal group ... the only nationwide political party controls the government.

Ethiopia´s federalism is described by Radio Netherlands in this recent article that includes the map above.

Ethiopia has undergone a remarkable transformation since the country adopted a unique form of federalism based on tribal identity in 1991. Anyone who wants to see the remarkable progress made since then should visit the Tigray region in the north of the county. Those who want to see how the federalist system has produced a remarkable level of violence should visit Gambela in the southwest.

The rebels who overthrew the cruel military Marxist regime (the Dergue) of Mengistu Haile Mariam in 1991 came from the north's mountainous Tigray region. At the last moment, the Tigrayans – led by Ethiopia's current Prime Minister Meles Zenawi – formed a united front with other tribe-based resistance movements.

Until victory and the necessity of accomodating a Western world victorious in the Cold War, the avowed aim of the Tigrayan People's Liberation Front (TPLF) had been an independent Tigray based on the ultra-orthodox Marxist-Leninist model of Stalinist Albania

Once the Mengistu regime had been toppled, some 69 tribal and regional resistance groups came together in the capital, Addis Ababa, in 1991 to establish a new political system: tribal federalism. Unlike the rest of Africa, where nationalism has been preached in the period since the nations there gained independence, Ethiopia chose an entirely new path by emphasising the tribal identities of its people. The country was divided into semi-autonomous regions on the basis of the country's tribes or groups of tribes. These regions each have their own government, president and parliament.

View from the capital
The better-educated inhabitants of Addis Ababa, now the country's federal capital, have often left their tribal origins behind and regard the current political structure of the country as primitive and unworkable. They value the democratic freedoms which, while limited, are without precedent in Ethiopia's long history, but are critical of the dominant position of the Tigrayans in the federal government. Many of them believe the Tigrayans and their home region are getting a better deal.

In Tigray itself, there is solid unity...

There are two important points to make here.

First, the article points out that there is a degree of resentment among other groups that "the Tigrayans and their home region are getting a better deal". It is likely that Tigray is a destination for many development funds.

However, we believe that any implication that Tigrayans in general are somehow 'guilty' is an egregious error. One of the crucial aspects of the tribal system in place is the desire to divide and rule and to sow the seeds of suspicion.

Creating a climate of mutual hostility between groups serves the purposes of a narrow base of power. When others see Tigrayans as a group necessarily aligned with the government an involuntary enmity is created despite any interests Tigrayans may have in common with other Ethiopians.

Second, the article states that "(i)n Tigray itself, there is solid unity". Such a degree of 'solid unity' among any grouping of humans is suspect as is evidenced by the fact that all

(t)he area's one-time liberation movement, the TPLF, holds all the seats in the regional government and parliament.

The ruling party dominance of the Federal Parliament is almost as strong numerically and totally in practice. The EPRDF controls (Click on 'Ethiopia at a glance') 481 of the 547 seats directly while regional parties associated with the ruling party control another 37 seats.

The opposition is represented in parliament with 12 members from 3 ethnically-focused regional parties, the largest (9 seats) from the south. There are also 9 independent members. The U.S. State Department Country Report on Human Rights Practices had this to say about the status of the opposition

The Constitution provides for freedom of assembly; however, on several occasions the Government restricted this right in practice. Organizers of large public meetings or demonstrations must notify the Government in advance and obtain a permit. There were several reports during the year that permits were denied to opposition parties. Opposition parties also reported long, unexplained delays by the Government in issuing permits and last minute revocations of permits, which hindered the ability of groups to organize events.

Opposition political parties reported that their supporters were the targets of frequent and systematic violence by ruling party supporters during the year, often after leaving meetings

In addition freedom of the press is limited in Ethiopia and likely to worsen.

The strong hand of the ruling party is felt most strongly among the hapless Tigrayan people. In the rest of the country dissent is only tolerated as far as foreign donor's eyes can see or care to see. In 'united' Tigray the engines of control are far stronger than in other regions.

Indeed, that strong government hand extends even to the Western world where harrassment and intimidation are becoming alarmingly routine among the Ethiopian communities of the diaspora.

Remember the government imposed isolation of the Tigrayan people as these issues are discussed.

Mekelle, the region's capital, has undergone something of a metamorphosis, and has trebled in size. A rough landing strip has made way for an international airport, with a new highway connecting it to the city centre. And public transport is no longer the preserve of horse-drawn wagons as taxis drive down streets now lined with new office buildings. Outside the centre, brand new industries have put down roots, with an environmentally-friendly cement factory taking pride of place amongst them.

No more tribal dominance
The ancient Ethiopian nation – known for centuries as Abyssinia – was always ruled by emperors who came from one or other section of the population. They were usually Tigrayans or Amharians. The Amharians were the ones who profited most under the country's last emperor, Haile Selassie, and the Mengistu government. Together with the Tigrayans, the country's largest ethnic group, the Oromos, felt they were the losers. The new federal system was meant to end forever the situation where one ethnic group could dominate all the others.

However, one political group has come to dominate all the others in the NAME of one ethnic group but with its OWN interests as an elite. The German Foreign Ministry (Click on 'Ethiopia at a glance')describes not the Tigrayan people's dominance but that of ruling

coalition of the Ethiopian People's Democratic and Revolutionary Front (EPDRF) and its regional partners. The leading voice within the EPDRF is the Tigray People's Liberation Front (TPLF), which led the war of liberation against the Derg.

That aim has been achieved in Tigray because of the level of unity, the enthusiasm of the people and those who govern them, and perhaps also because the area gets preferential treatment. However, the federal structure has had a completely different impact in Gambela, which lies in the lowlands in the southwest of the country, along the border with southern Sudan. Here, the system has made traditional relations – and tensions – between the local tribes more entrenched. In December 2003 mass killings took place in Gambela and elsewhere in the area, in which hundreds – some say thousands – of people lost their lives. It appears that federal government army forces were to a large extent responsible for the violence.

The downside
The regions two main ethnic groups, the Anuak and the Nuer, are fighting to gain influence in the regional government, and the influx of tens of thousands of settlers from the highlands is only serving to make relations between the tribes even more explosive. Gambela itself still looks as neglected and underdeveloped as it did 13 years ago, only now it's also extremely unsafe. The local inhabitants accuse the government of operating a divide-and-rule policy in Gambela. The dangerous level of xenophobia in Gambela provides evidence for those that oppose the federal system that democracy based on a tribal system simply doesn't work.

More on the Anuak issue in the future but for now take a look at Anuak Genocide Watch.