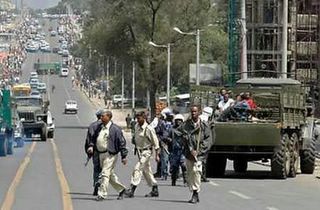 Defending the Revolution Counter-Revolutionaries arrested and awaiting a trip to the gulag, courtesy of Yahoo/Reuters.

There is a wondeful old children's story by Hans Christian Andersen called "The Emperor's New Clothes". It is about a ruler who parades before adoring crowds in garments so fine they can’t be felt (or seen) until one little girl innocently destroys the mass illusion of power and fear ...

Ethiopia's dicatorship is certainly more clever than most and quite willing to exact a heavy price on its people to stay in power as long as possible. As justifiably cynical as we have been about the politburo's staging of this election, in a very significant way we have been 'missing the trees for the forest'.

A profound degree of distrust and disgust with the ruling party is well earned by its machinations and its use of words like 'democracy' and 'elections' is quite obviously insincere. However, it seems we have given short shrift to the brave and evident sincerity that the opposition and Ethiopians hold in themselves as they together face a politburo with an atavistic zero-sum view of human existence.

As we said, readers may be curious about how democratic elections can take place where there is no rule of law, there are no democratic institutions and the sole impetus for even phony elections is Western monetary pressure on the omnipotent ruling party to treat Ethiopians halfway decently for a change.

Of course, democratic elections can't be held under those circumstances but an awful lot of people seem to have made themselves heard anyway. Like so many dictatorships before - this one was confident enough of its own calculated application of terror and might even have believed enough of its own propaganda to be surprised by how hard it became to fake an election when millions of people decided to defy them.

There may be long years ahead of incalculable damage done by revolutionary democracy and the revolutionary feudal aristocracy ruling Ethiopia today. However, now the countdown has at least begun. Consider this - unless the defeat had been greater than anyone imagined the party would have been prepared to fake a victory quite easily.

The most telling vidence of this, courtesy of the Ethiopian Review and Ethiomedia is that

The ruling party of Prime Minister Meles Zenawi could not win a single seat at any polling station where there were foreign and opposition observers.

Even the European Union observers weigh in with unprecedented criticism of the "the lack of transparency, and assumed rigging" evident in the trickle of chaotic, contradictory and government dominated poll results.

The 90% figure for voter turnout is also doubtful. Getting 90% of any group to do anything is next to impossible except at the point of a gun. We suspect that figure was just made up so that vote rigging later could have a margin of invention to work with and because it would catch the attention of media who had no way of knowing different.

We also suspect that the concessions to the opposition in Addis Ababa are an example of the classic scam of 'salting the mines'. The practice refers to placing real bits of gold around a non-productive mine entrance to fool potential investors.

The folks who are to lose their seats in the rubber stamp Parliament have either displeased the politburo, were 'volunteered' to take a hit for the home team, or the election matches a cycle of hiring and firing that was already on.

After all, with all the ferenjis watching somebody had to lose to make things look good. Either way, the patronage, villas and Range Rovers given to 'well behaved' people are only taken away when they break party discipline - voters have nothing to do with it at all.

We think that 'salting the mines' in Addis has been a government tactic planned years ahead of time against inescapble (to observers) opposition gains. The opposition will be sabotaged at every turn and the government, at the helm of a vast information and coercion machine, will insist on how sincerely it tried to help out.

The fact that they are having so much trouble carrying through the election con game to the end is a clear sign that they will soon reveal the same brutal face to the world, that 70 million Ethiopians and only particularly inquisitive foreigners have seen before. After that the primitive Leninist - Maoist - Tribal justification for power called revolutionary democracy will join whatever nonsense the likes of Mugabe and Mengistu had for their rule.

Ethiopians of every ethnicity long ago appreciated the terror and lies inherent in the revolutionary democratic game, above all, the politburo's cadres and all of the politburo's yes-men knew exactly what was going on. The rules won't change but more folks will break them. The party will crack down even harder and cause more defiance and on and on.

Foreign donors have always been contemptously pleased that at a minimum those in charge were not as monstrous as the Dergue, knew when to use the proper fork at state dinners, and got out of the way on occasion to allow aid to slip through the cracks to the masses below. It is likely that their unconditional support will fade even if the EU gives a resigned blessing of low expectations to the election.

No credit goes to the politburo for its miscalculations while staging an elaborate show, principally for a foreign audience. Compromise and a level playing field are seen as the consolations of fools and losers by Ethiopia's rulers. If they change, it will be in favor of vicious revenge for their embarassment before the world.

The Ethiopian equivalent of the little girl above has spoken. This long national nightmare is by no means over but the end is somewhere in sight. The struggle will be in keeping the country together as the politburo's vengeful design of failure angrily drags millions down as the price others have to pay for another year, even another minute of dictatorship.