Meles's Not So Excellent Adventure 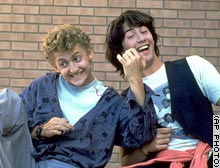 These two make more sense ... and 70 million people don't have to go along with them either.

So what is going on in Somalia anyway you may ask? We are surprised you wonder because since the early 90s the only time that the whole world actually noticed events in Southern Somalia was when "Blackhawk Down" was released five years ago.

You see, trouble in Somalia was ordained by the absurd national mission forced down Somali throats without interruption from independence on by a succession of dictators - that all collapsed in 1991. That ersatz national destiny required the conquest of all of its more populated and powerful neighbors along with 'Revolutionary Democracy' style idiocies such as 'Somali Scientific Socialism' justifying the dictatorship of a few.

Such silly ideology was bad enough but along with a commitment to eternal war it can be no surprise that Somalis had little chance from the beginning and caused its neighbors quite a bit of bother, Ethiopia in particular. Even though Northern Somalia was able to escape what became a tradition of chaos, Southern Somalia became and remains a mess. Since then there has been a steady, almost imperceptible background drum beat of non crisis like stories about warlords, piracy, entrepreneurs providing basic services where there was no government, secret Al Quaeda training camps and the like.

In the past month or so that has all changed big time.

Where to start ... where to start .... OK, the Usual Suspect Clan Warlords (USCW) lost a battle for control of Mogadishu and eventually most of the region to the New Jack Islamist Warlords (NJIW) that we certainly had never heard of. Not only that, but the US was allegedly helping the USCW and Ethiopia definitely was helping them. Oh, and Eritrea was aggressively arming the NJIW in a bid to outflank Meles Inc (actually at this point it seems, just to mess with Ethiopia for hell of it).

The NJIW commenced immediately to vigorously attack Coca Cola drinkers, movie watchers, soccer fans, all females of our species and all men who did not immediately realize what they should have known all along. Namely that if the NJIW said jump - the only appropriate response was an ecstatic and obedient "how high?" Just imagine - the NJIW made even the USCW and Siad Barre 'regimes' look like great liberal democracies in a matter of days.

According to the USCW, Eritrea was joined by Egypt and Saudi Arabia in aiding the NJIW and according to many others the latter had some rather unsavory connections to international terror. As the USCW were being chased across the region, the UN backed (alert the media!), Ethiopian supported, For Real Somali Government in Internal Exile (FRSGIE) welcomed Ethiopian troops sent by Meles Inc. into Baidoia (the FRSGIE capital) and environs.

Meles Inc., however, denied it was attempting any hostile takeovers at all. The FRSGIE said that it was all a mistake due to Ethiopian donated uniforms on its own soldiers while Meles Inc. denied the whole thing with the same straight face it used to deny everything from blocking blogs onto keeping 70 million hostages. A few tame reporters claimed to see nothing but there could have been a legion of Galactic Storm Troopers straight from the Clone Wars right next door for all they were allowed to see.

An old Soviet cargo plane from Kazakhstan loaded with Eritrean arms landed in Mogadishu with goodies for the NJIW along with possibly hundreds of Eritrean troops. FRSGIE ministers started getting killed by somebody, many FRSGIE membere resigned in protest against Meles Inc. troop deployments, some USCW changed sides several times and claimed to be winning and the NJIW declared a jihad against Ethiopia.

Meles Inc. wanted to change the subject from its own bloody dictatorship to just about anything else to finance itself ... and 'fighting terrorism' was rather conveniently waiting right there next door ... especially as the US Congress was considering a bill to sanction the Meles Inc. corporate board for its violent business practices.

The New Jack Islamist Warlords wanted attention ... negative attention from the West and Ethiopia could be turned into positive attention from many other circles in the form of cash ... the invasion by Meles Inc. provided a perfect opportunity to have a real live jihad and to define authentic Somali-ness all at the same time.

This came from Foggy Bottom recently via Nazret

"There are many foreign elements in Somalia right now," U.S. Assistant Secretary of State for African Affairs Jendayi Frazer said, citing reports Ethiopia was sending troops to back the interim government and Eritrea arms for rival Islamists.

"Neither the Union of Islamic Courts nor the Transitional Federal Government can take the high ground by saying the other is violating Somali sovereignty...they've all invited in foreigners, all been backed by foreign forces," she added.

Unless there is some really deep double game being played here it seems that Meles Inc. went into Somalia all on its own. However much Ethiopia's relatively professional army may dominate the field it is simply crazy to imagine Ethiopia sustaining a force in Somalia over time as foreign opposition mounts. Beyond that the attributes of a regular military force would mean little near or in Mogadishu.

Either the expense or logistics or political cost (or all three), of a sustained fight away from the border are well beyond the capacity of Ethiopia's expeditionary force and regime. It would not be humanitarian concerns like those that held back the UN and the US back in the early 90s that would turn back such an Ethiopian force. Unlike the US Rangers and the UN force that took casualties to spare collateral damage, Meles would not hesitate to raze all of Mogadishu to stay in power and collect cash for another day.

Meles Inc. has given all combative and peaceful Somali's the perfect reason to fight to the bitter end. That marks the criminal error of an invasion that costs almost as much if it doesn't go past the border and nothing is accomplished as if it does achieve its nebulous purposes ... Meles has invaded their country just because he did not approve a their potential government - no Somalis, including the temporary allies of Meles Inc will like that in the end.

Meles has invaded Somali without any pretext at all that could be sustained in the most forgiving of forums. Via Nazret, this Economist article makes it clear that even those occasional Meles Inc. apologists aren't letting the wool be pulled over their eyes this time around,

Both the Ethiopians and the Islamists have something to gain from fighting. Ethiopia, which has often meddled in Somalia, is one of the world's oldest Christian-led countries, though it has many Muslims too. A war against militant Islam in the region might make it a useful ally of America, bringing cash and diplomatic support. It would also be quite a coup for the prime minister, Meles Zenawi, since America's Congress recently passed a bill condemning his government as an undemocratic abuser of human rights, which it is.

Does this herald an overall 'coming to their senses' phase for the international media after years of breathlessly false 'at least Meles is making the trains run on something resembling a schedule' and 'what a cute & brave former guerrilla fighter he is' nonsense ... we won't hold our breath waiting but every bit of reality is welcome.

Although we are bound to be sympathetic to long standing Ethiopian interest vis a vis Somalia and although we are also supportive of American interests in the War on Terror it seems to us that the policies of Meles Inc. will make everything far worse for everyone. Previous Ethiopian governments going back centuries (even including the reality and mentally challenged Dergue) avoided invading Somalia and did not even intervene except in the most exigent circumstances - and then only temporarily - without a proxy government to prop up.

Not out of fear mind you, but out of common sense because going into Somalia, just like going into any neighbor is like sticking a hand in a hornet's nest. Meles has gone into Somalia with no provocation on an uncertain mission with no end or even clear aim. One miscalculated purpose is finely tuned to influencing Congress with the current parade of tame supposed 'opposition' politicians while the real ones fear death in jail. Another may be a reflexive sense of competition with the former allies of Meles Inc. in Eritrean government.

Whatever the reason this was not thought out well - unless the reason is just to create and perpetuate crisis and instability with the purpose of being seen by the world as both the guarantor of the status quo and its principal manipulator as well. All to the tune of billions of Euros and Dollars and many more years to collect them and ship them into banks and properties abroad.

One last point about messes that Meles Inc. has and always will be getting Ethiopia and the world into ... because of the tribal based policies and politics of Meles Inc., Ethiopia has become a country which is legally / constitutionally only a barely legitimate collection of bantustans that can become independent at will for any reason at all or for no declared reason at all by anyone from the regional down to the neighborhood level.

In real terms the government uses that potential for chaos as a threat and uses brutal extra-legal means of its own making to hold it all together outside of the absurdities of current 'law'. Like the Sword of Damocles hung over one ruler to teach humility, utter disintegration awaits Ethiopia if it succeeds in getting rid of Meles Inc. - or so Meles Inc. would have us believe - Ethiopia is far more resilient than that.

But ... accepting the espoused logic of Meles and his government ... it seems like the 'Revolutionary Democratic' thing to do would be too ask the people of the Somali Killil what they want and accept that judgement regardless of the larger national interest. They probably wouldn't want to do so but maybe they want to join the Eastern third of Ethiopia immediately to the USCW or the NJIW or to the FRSGIE.

Or given the logic of the Ethiopian constitution, an equally legitimate case is a seat in the UN for any group of kids in Gode or Bishoftu or Adwa or Debre Birhan (or even on Bole Road) who play marbles or soccer together fairly regularly and who feel they have a right to form an independent country. After all, that is what it says in the Meles Inc. constitution right? Confused yet? If you are not you should be.

It is 'governments' and 'leaders' such as these that make us wish conflicts between dictators and aspiring dictators could only be settled by single combat with the victor and vanquished both being shipped off to Devil's Island afterwards. Ethiopia and Somalia (with the exception of Northern Somalia) have never gotten on too well and Somalia has never had a friendly border for that matter.

None of the 'leaders' in question has even a vanishing connection to the interests of the people they supposedly act for. Throughout most of living memory - nation, ideology, tribe, clan and now religion have been the tools of heartless men for the purpose of their personal power.

That is what is up in the Horn of Africa.