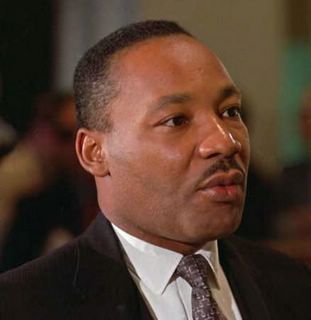 "It may be true that the law cannot make a man love me, but it can stop him from lynching me, and I think that's pretty important."

Here are two of our favorite examples of his writing. The 'Letter From a Birmingham Jail' of April 16, 1963 can give us a good sense of the man and his vision. His 'I Have a Dream' speech is even more uplifting and tragic for what we know was to come.

It is hard to have something original to say about MLK. He is an icon and his legacy is not in doubt. It would be impossible to forget the man who walked point in the battle to make America see itself clearly ... and to reform so that it wouldn't have to turn away in shame.

This July 2004 article from the Macon Telegraph, 'Civil Rights Act of 1964 paved way for prosperity' points out an oft ignored part of his legacy. The whole thing is certainly worth reading but we will try and find the hightlights.

Today, the Civil Rights Act and its equally sweeping companion piece, the 1965 Voting Rights Act, are credited with improving the lives of blacks: by ending Jim Crow - laws and customs that separated the races - and by spurring the election of thousands of black officeholders across the Old Confederacy.

But as bitterly as white Southerners fought these encroachments on their "way of life," the federal laws freed them, too.

"It liberated the South to make money," says Ferrell Guillory, director of UNC Chapel Hill's Program on Southern Politics, Media and Public Life. "So long as we held ourselves to a segregationist system, we held ourselves chained to an old economy."

Removing the stigma of racism that had long isolated - and impoverished - the South led to a Sun Belt boom that drew high-paying employers, major-league sports teams and northern transplants by the millions.
[...]
Since 1978, the South has led the nation in job growth, accounting for four of every 10 new jobs. The region's population has jumped by more than 20 million since 1978 - a growth rate of 30 percent, nearly double the rest of the country.

The civil rights laws "made the South wealthy - black and white," says King biographer Taylor Branch. "It opened up middle-class jobs that had been walled off to black people. And it freed even many whites who were entangled in fear and worried that they couldn't have a business meeting with a Northern company because a black person might be sitting in the room."

Southern merchants looking for a way to serve blacks without losing white customers found one, says Rep. John Lewis, D-Ga.: "They were able to do it as a group and say, `It's the law.'"

Today's Charlotte - an international banking center - could not exist in a still-segregated South, says Juan Williams, author of "Eyes on the Prize: America's Civil Rights Years, 1954-1965."

"That's not possible if people in New York and London and Tokyo say, `Charlotte - that's some strange place beset by political instability. We can't be comfortable doing business in an area ...with all that discrimination and all those protests and sit-ins and riots,'" he says.
[...]
But in the years leading up to the 1960s, when segregation was still the norm in the South, the region lagged in job creation and in the quality and pay of the jobs it did have.

MDC, a Chapel Hill think tank, described the workers of the pre-civil rights South this way: "Mill hands and farmhands, clerks in the dry-goods stores and hardworking folks wearing straw hats. Only an elite few went off to college and then practiced law, managed companies or engaged in commerce in the world beyond."

The status of blacks was even lower. When the Civil Rights Act passed in 1964, only about one of every four black adults had a high school diploma. Today, eight in 10 do.

The article points out that Kennedy's death gave Johnson the influence he needed to get the bills through the Congress and Senate. However, MLK was at the very core of the moral force behind the Civil Rights and Voting Rights Acts - and these economic facts are just another wonderful part of his legacy.

It is tragic how seldom we can count on men to do the right thing and value the freedom of others. The eventual practice of a 'national morality', beyond rhetoric, in political life is an inescapable part of human development.

It is therefore reassuring that economic necessity and the institutions needed for mass prosperity require respect for human rights. Ultimately, it is only a self interested and deceptive ruling class that can make mass failure seem somehow desirable to all of its victims.

One view of the ante-bellum South holds that the origins of the Civil War were economic. Northern traders and industry certainly profited from slavery after the invention of the cotton gin. However, the North had long before abandoned slavery and quickly determined that the long term interests of the Union were harmed by it.

To see why let us imagine the South of that time. Blacks obviously led daily lives dominated by the very distilled essence of evil in the form of slavery and its racial justifications. Whites by their millions were willing to fight to the death to defend that evil but only a few benefitted from it.

The Southern elite lived lives of faux European pretension. They had the money to imitate the most unproductive nobles (of which none had ever been part anyway) that Americans had fought to be free from just a few generations before. They crafted a martial world of ready violence, held at bay for their own class anyway, by ritualistic old world manners.

Southern Whites in general did not have it good at all. Compared to their Northern counterparts they were poorer in every imaginable aspect of human productivity and development except for a surfeit of pride. Compensation for their status and their poverty was found in the consolation of racism that allowed them to feel better about themselves and to have someone to hate and fear besides the elite authors of their misery.

Slavery impoverished most whites as did single crop agriculture - either cotton or tobacco it drained the soil of life. The Southern system gave them little of the benefits of the Industrial Revolution convulsing and enriching the North so all they really had to offer was muscle power. Slaves had that for free - mainly in the service of the elite.

Slaves were actually not cheap - each represented a significant investment. One of the principal structural faults of the Southern economy was that so much investment was tied up in slavery that there was little left over to build the infrastructure and enterprises that the North had in abundance.

Indeed, slavery encompassed many trades such as blacksmithing further limiting the options of poor whites. The burgeoning capitalism of the North clearly recognized that slavery was not only unprofitable but ultimately a historical and economic dead end.

The North's relatively more representative elite did not want slavery to spread West into the rest of the continent. The Southern elite did want to spread out but couldn't compete in any way beyond politics. Their influence was disproportionate in Washington because they had managed to get Slaves partially counted as human beings so that the numbers of their own Congressmen could be inflated.

Southerners were also belligerent and constantly threatening a North preoccupied by prosperity with war and seccession. The South, having set itself apart and lost in its complex and layered but always fantastic self image, was losing a race for the survival of the fittest so it started the bloodiest war in American history to cling to slavery and illusions.

It is often sad that the Civil War was started because of slavery but was fought to preserve the Union or to preserve States' Rights. Yeah sure, but it was about slavery anyway. The Abolitionist impulses that ended slavery in the North and that stopped the African slave trade with the might of the British Fleet may have all manner of economic interpretations but its moral arguments can not be ignored.

Actually, before the modern era only the Union and the British Empire considered it an issue at all. From an essay by Thomas Sowell

To me the most staggering thing about the long history of slavery -- which encompassed the entire world and every race in it -- is that nowhere before the 18th century was there any serious question raised about whether slavery was right or wrong.

In the late 18th century, that question arose in Western civilization, but nowhere else.

It seems so obvious today that, as Lincoln said, if slavery is not wrong, then nothing is wrong. But no country anywhere believed that three centuries ago.

This moral development that heralded good for all of mankind did not occur in a vaccuum. That was also the Age of Enlightenment, an intellectual movement

which is described as being the use of rationality to establish an authoritative ethics, aesthetics, and knowledge. This movement's leaders viewed themselves as a courageous, elite body of intellectuals who were leading the world toward progress, out of a long period of irrationality, superstition, and tyranny which began during a historical period they called the Dark Ages.

The Enlightenment revealed to us modern science, liberalism, capitalism and the enshrinement of the rights of man. There is no coincidence that all of these factors are observed together repeatedly in successful societies across history and the globe. It is always good to know that morality has loyal friends like freedom and prosperity.

The evil of slavery tried to hide from the Englightenment and lost. Simply put capitalism won the Civil War but more accurately the future did. The Enlightenment also gave us its 'bastard children' in the form of messianic totalitarianism of various stripes. Some still cling to life and others live on in the roots of the more modern perversions of religion.

History may not be over just yet but inherent systems and qualities make the good guys stronger not just in the past but also for the battles being fought all over the world. Given the darker side of human nature there will be more battles to come in every arena.