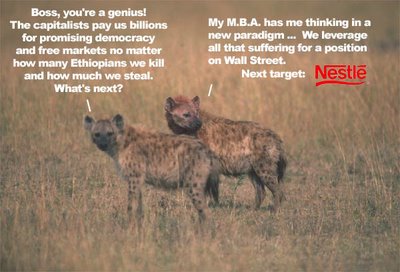 This post is a companion piece to Scavengers of the Horn about the attempted corporate vs. corporate shakedown of Starbucks. Once you recognize the degree of criminal mindedness inherent to Meles Inc. one can't be surprised they tried it again.

Again? You see dear reader, back in 2002, Meles ran the same con game on Nestle and it worked. He cleverly crafted an image of a big bad corporation greedily going after the money of poor Ethiopians. Oh ... and Oxfam was involved in that one too.

Ethiopians are still paying the price for that and all too many other forms of ashattir with the very lowest absolute and per capita Foreign Direct Investment (FDI) levels on planet earth.

The Swiss-based food giant, Nestle, has defended its demand for $6m in compensation from famine-stricken Ethiopia.

The dispute with the Ethiopian Government centres on a livestock firm that was owned by Germany's Schweisfurth Group, a Nestle subsidiary, before being nationalised by the former communist regime in 1975.

"I think it goes way beyond the legal case," a Nestle spokesman told the BBC.

"I think it is in the interest of the developing countries in general to have a continued flow of foreign direct investment."

He said it was "very important for a country like Ethiopia that people do not fear to invest in that country".

Then suddenly, from the Guardian one day later

Nestle, the world's largest coffee company, was forced into a humiliating climbdown yesterday after a wave of public outrage greeted its demand for a $6m (£3.7m) payment from the government of famine stricken Ethiopia.

The company promised to invest any money it receives from Ethiopia back in the country after receiving thousands of emails of protest in response to the story in yesterday's Guardian.

At an emergency meeting in its Swiss HQ last night, senior executives were mulling over the public relations damage. The claim represents about an hour's turnover for a company which posted sales of $59.36bn and pre-tax profits of $6.15bn last year.

Nestle - fearing a consumer boycott of its products across Europe - is considering donating some of the money it is demanding to help feed the 11 million Ethiopians who face starvation in coming months.

Campaigners last night repeated their call for the company to abandon its claim entirely. "I hope that Nestle reconsiders and realises they don't need the money as much as Ethiopia. I hope they drop the issue altogether," said Sophia Tickell, senior policy analyst at Oxfam.

Amazing! Who benefits from this turn of events? Ethiopians? Not a chance - their credit rating just fell through the floor. Meles Inc.? Of course.

The Nestle spokesman was exactly right - it is in the interest of developing countries to be seen as responsible financial partners. Nestle is responsible to its shareholders and in the business of making money - which it does very well.

Just be sure that Nestle profits and the profits in the control of any sensible investment officer (who reads economic and investment country reports with any degree of intelligence) anywhere in the corporate universe will NEVER be invested in Ethiopia now after silliness like the Nestle and Starbucks issues.

As ever, the Meles version of long term planning is to weaken Ethiopia while short term planning is about grubbing around for as much cash on hand right now to send away into foreign banks. Which also has the added benefit for him of further weakening Ethiopia - like a parasite he needs his host to be weak.

Tens of billions in aid, budget support, loan forgiveness and serial 'new' loans never to be paid back have gone out as protection money so Meles will ruin less Ethiopian lives and so he won't bring the Horn of Africa down around him like a demented Samson.

None of those tens of billions from 'development partners' has translated into any economic growth or any dream of escaping suffering as the tradition it has become. Rather, Ethiopians are getting poorer even as her revolutionary feudal aristocracy gets ever more filthy rich.

There is no coincidence to be found in these truths.

Almost all of the rest of humanity has escaped or is busy escaping the "poor, nasty, brutish and short" life that has been man's fate for so long. None of them did it or are doing it because of foreign aid.

Aside from elementary pro-growth policies absent in Ethiopia such as the rule of law, free markets and secure rights of ownership - what all developing and healthy economies have in common is high levels of corporate FDI.

Ethiopia's levels of FDI are subterranean because of the very purposeful policies of the Ethiopian regime whose elite is busy sending money siphoned from aid and squeezed from Ethiopians onto investments and bank accounts in the West.

Absurdities such as discussing comodity markets in Addis (where anyone who sells TPLF stock short will be arrested), Silicon Valleys on Bole Road, 'unprecedented' FDI, and how lies about 7% growth will make Ethiopia a middle income country in a few years can't change the fate of 70 million Ethiopians under the rule of Meles Inc.

The corporate folks who make decisions about where to invest the hundreds of billions (if not trillions) of dollars and euros floating around the world just looking for a place to land aren't stupid.

That money never gets to Ethiopia and never will because investors don't want to trust one of the most corrupt governments on earth that also has no respect for private property rights when so many other places are far more friendly and sensible.

That is especially the case when an inevitable business dispute with Meles Inc. necessarily becomes a potential P.R. disaster and a shakedown based on how corporations are hurting poor people.

Government, World Bank and I.M.F. money, even in the tens of billions, is not transformative in any positive sense. In fact, it hurts the recipient by divorcing public policy from any local accountability be it political or economic while encouraging corruption and dictatorship. (See the post So Much Ill and So Little Good.)

Anyway, taxpayers from the West are generally kept in the dark about what foreign aid does. Academics, bureaucrats and journalists who find it easier to report government and 'expert' words faithfully than to fact-check, prefer to ignore the complexity of development in favor of a throw money at the problem approach that has never worked and never will.


Don't invest for your own good, do it for Meles Inc.

Another bit of classic tragic absurdity from the Ethiopian government was discussed in the post Cognitive Dissonance. An INVESTMENT official had this to say about Ethiopian-Americans investing in Ethiopia

[h]e wanted to see Ethiopians come back to invest for the greater good for the country, because they want to help Ethiopia develop a sustainable economy.

His experience, however, has been one of Ethiopian Americans asking for special favors when considering investing or coming back expecting special treatment for the government.

He sees these investors as interested in financial gain rather than the good of Ethiopia.

Hello! The whole idea of a market economy, classical liberalism, capitalism, competition and investment that has made some of the world free and prosperous or on its way to being so is based upon financial gain ... the shared opportunity for all to seek their own totally and utterly selfish financial gain.

In normal economies the common good is defined by millions of free and necessarily selfish individual decisions that cause the best to rise up and the worst to fall. It is the genuine democracy of the marketplace that does so well everywhere at creating prosperity and laying the groundwork for the rise of the bourgeoise and political freedom and all of that other good stuff ... given limited government intrusion.

If government wants to define the common good by the willingness of investors to lose money and waste time while being comforted by a sense of national duty - then there will never be meaningful investment or willing risks taken.

Certainly, choosing where to invest can rationally be based in part on emotion and familiarity but only in part just as pity used agains the corporate world will produce absolutely nothing. Billions in potential investment over time has been lost to Ethiopia from the diaspora and tens of billions if not more from corporations.

Why? They don't want to lose their hard earned money or that of their shareholders to the hands of one of the most corrupt governments on earth that is also among the most hostile to free enterprise. Big business in Ethiopia means party owned conglomerates married to government monopolies with no oversight and mafia style enforcement of ever shifting rules.

The Nestle spokesman and the reporters above talk of the 'former' communist government of Ethiopia as though things have changed for most Ethiopians. From the BBC

Mengistu confiscated private property and businesses and Meles won't pay it back. Just like the natural convergence of Dergue and TPLF policies on human rights, intrusive neighborhood / household level control of people, and land ownership both made an effort in the late 1980's to convince the world that they weren't Marxist-Leninists.

The TPLF won the battle to see who was the real communist and the battle to "fool the imperialists" into funding their dictatorship. There is no 'former' communist regime - despite copious amounts of lipstick on a pig today, the basics of Ethiopian rule have not changed beyond the demands necessitated by a world where the side Meles and Mengistu were on together lost the Cold War.

Foreign aid is a political / security matter that demands no results and that has allowed Meles Inc. to find a constituency in the West that totally bypasses Ethiopians. FDI is economic, can't be fooled and will necessitate a more open and equitable society in Ethiopia.

To Meles, that is an unacceptable trade-off. He and his cronies prefer to scavenge what they can right now. As long as Meles Inc. shows a profit all is well with their world - and that is all that matters.