Hatred is the Basis 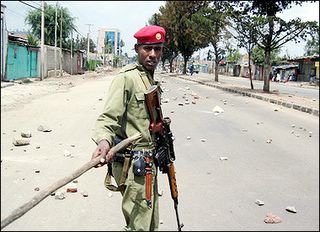 "Only the government is allowed to incite violence" Dragunov armed Revolutionary Democratic sniper on the streets of Addis Ababa deploying against civilian protestors, courtesy of Yahoo/AFP.

We must hate — hatred is the basis of communism. Children must be taught to hate their parents if they are not communists."


Releasing the final election results a month late is designed to allow the interchangeable - ruling party / government / election board - apparatus enough time to get its ballot box stuffing and statistical manipulation act together within comfortable margins.

In the meantime, the dozens of murders that the politburo has admitted to committing, the imprisonment of further thousands undergoing torture or at risk of it, and the arrests and abuse of opposition leaders serve several purposes.

The obvious aim of this open form of Revolutionary Democratic Terror is to prevent popular anger from coalescing into powerful peaceful mass protests before billions of witnesses around the planet. Another reason for the accelerated reign of terror is to change the subject from the practice of reasonable democracy to the enforcement of 'law and order'.

Essentially, everyone concerned from Ethiopians to foreigners is being reminded about exactly who and what the government is and what the stakes are. The Prime Minister accuses opposition leaders of "inciting violence and starting fires" and adds that "[i]f things get hotter they will be detained without any question. If that's intimidation, so be it."

The Prime Minister's statement is contradicted by every reasonable account of current and historical practice of the government, and he knows it. The actual message is that observers should not expect much in the way of civilized behavior towards anyone who thinks that the ruling party will ever voluntarily leave power for any reason under the sun.

Remember, the urban terror is only what we know about and a tiny fraction of the state horrors that are being meted out in rural Ethiopia. There can be no doubt that government revenge for its election humiliation is far worse in the countryside where there are no prying eyes.

To further the aim of tribal divide and rule, the country has been divided into bantustans in the same manner as apartheid era South Africa. The rulers of each tribal 'killil' rule their people as feudal subjects and they are in turn the vassals of the center of power.

Actually, they are also subject to the direction of 'deputies' from the center who really run the show. The center has long resisted making Addis Ababa the capital city of the Oromo ethnic region but agreed to do so just this week.

This reversal of a decade and half's policy of ignoring all Oromos and the use of the historical Oromo name for Addis Ababa, Finfine, is another bit of political / ethnic gameplaying. Putting Addis in the control of their vassal (so called Oromo) party in advance of the pretense of opposition rule of the capital, will allow the politburo to create ethnic tension out of the reality of their planned sabotage of city administration.

This is an appropriate time to note the recent Human Rights Watch report, "Suppressing Dissent: Human Rights Abuses and Political Repression in Ethiopia’s Oromia Region." Fear of actual Oromo political power or of its identification with Ethiopia has led that region to be the victim of a veritable catalogue of government abuses.

Ethiopia's rulers are using the extra time other horrors as well. Ethiomedia calls uniquely evil that

[l]eaflets typed in Amharic were distributed in Addis Ababa on Wednesday, reportedly calling for residents to hunt down Tigrinya-speaking fellow Ethiopians. The leaflets are distributed as if they were from Kinijit or Hibret opposition supporters.

These government publications are designed to draw the ethnic battle lines even more firmly than the past fourteen years of tribal divide and rule. Tigrayans are being warned what fate may await them if the government, that hijacked their identity thirty years ago, is threatened - so they had better stay loyal.

All others are being threatened with a violent response commensurate with the threat of ethnic cleansing. You see, the leaflets don't have to be believed to have the desired effect - just raising the subject of the unique evil of genocide is meant to be a mortal threat to all concerned regardless of their ethncity.

The government warned that the opposition was planning a Rwanda style campaign of mass murder before their election show went bad on them. The whole issue and the code words associated with it like 'neftegna' are designed to incite hatred of Amharas. National unity is considered a mortal threat by the politburo to its continued existence atop a pyramid of misery and mistrust.

The government is particularly desperate to make Ethiopians hate each other because the politburo's whole reason for being is predicated on erasing links between groups that can keep the definitions of national identity alive. The opposition today is as ethnically united as the Ethiopian forces that faced Egypt in the 1870s or the armies that fought Italy in the 1890s and during the Second World War.

Blood, Oil and Ethnic Rule in Gambella describes how the government began a campaign of ethnic cleansing familiar to the world from Sudan's behavior after oil was discovered in the south-west. They got so much things to say examines how the government is hijacking the religion of Rastafarianism because of its own agenda of divide and rule.


On the Pitfalls of Ethnic Politics describes how the constitution devalues national identity and encourages tribal divide and rule along with social / economic failure in the service of party power. Don't Believe The Hype shows how ethnicity has been used by Marxist-Leninist parties for a century as a means of weakening enemies of revolutionary parties.

Watch for more ashattir - trickery from Ethiopia's rulers in coming days and weeks. You will definitely see more tribal (and religious) trickery - aside from violence and assorted justifications for repression, that is all they really have to offer humanity.