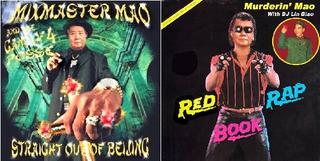 21st Century Maoism - CDs on sale now in Addis Ababa, Pyongyang and Havana
(Images are from a Fark photoshop contest.)

With very kind permission we have serialized over a number of posts, Chapter 7 of Dr. Theodore Vestal's remarkable book Ethiopia: A Post-Cold War African State. That chapter deals with the the ruling party's 'Revolutionary Democratic Goals' based on internal documents of the party that were published as "TPLF/EPRDF's Strategies for Establishing its Hegemony & Perpetuating its Rule," in Ethiopian Register Magazine.

The third part of Chapter 7 was (4) Revolutionary Democracy Returns, which noted the political strategies of the party for ensuring permanent hegemony and the rules various actors in society will play or be forced to play in forcing eternal rule.

This final entry (5) Revolutionary Democracy Reloaded is the end of Chapter 7 and will conclude with the strategies for hegemony and conclude this overall revealing and stunningly frank blueprint of a revolutionary vanguard party to reach its aim of permanent dictatorship while convincing the whole world otherwise.

This is indeed 'Zemene Ashattir - the Era of the Trickster' as opposed to the Dergue's 'Zemene Awre - the Era of the Beast'. Differences in public relations abilities and intelligence can't obscure the totalitarian ideology at the core of both and the trail of destruction that is the price of unprecedented power for a few.


The whole of Dr. Vestal's book is important to an understanding of contemporary Ethiopia. He is clearly a friend of Ethiopians everywhere because he makes no excuses for Ethiopian suffering when oppression comes from within. The tiny revolutionary feudal aristocracy that makes victims of Oromos, Tigrayans, Amharas, Sidamos, Anuak and Gurage alike should receive no credit for just happening to look like its victims.


In the nation's schools, the curriculum can be used to disseminate scientific knowledge and teach respect for the histories and cultures of various ethnic groups. The study of the country's constitution provides an opportunity for the Front to inculcate the basic goals of revolutionary democracy. Because such study is not openly presented as propaganda, it will effectively serve the purposes of the EPRDF.

The Front also will attempt to persuade teachers, key figures in education as propaganda, to stand for revolutionary democracy. The EPRDF will involve teachers in curriculum design and convince them of the need for changing the educational system. By involving teachers in social and developmental activities and subjecting them to party-line explanations provided on such occasions, the Front hopes to "bring them to the fold of revolutionary democracy."

Students, too, should be involved in party developmental and political activities. The EPRDF will utilize sports activities, associations such as boy scouts, clubs, and various seminars to mold the views of young people.


Religious organizations are characterized in the strategy document as always being propaganda tools and frequently aligned with reactionary forces in society. Such organizations can be used to disseminate the revolutionary view within certain limits. If such a strategy is impossible, the Front should attempt to curtail organized religion's obstructionist activities.

Rather than focusing on the leadership of religious groups, the EPRDF will direct its effort at village level religious organizations closer to people. Without denying the religious the respect due them, the Front will attempt to mold their views, curtail their propaganda against revolutionary democracy, and even use them to serve the party's end. The EPRDF also will forge a close relationship with the leadership echelon of religious bodies, exploit "their internal contradictions," and prevent them from coordinating propaganda against the Front. If possible, the EPRDF will use religious leaders to disseminate the propaganda of revolutionary democracy.


The Question of Organization


To establish the system envisioned by the Front, "the masses have to be organized in various social and political associations" which connect them and lead them in the direction of revolutionary democracy. While maintaining the relative autonomy of such associations as a means of promoting popular initiatives and as a check on corrupt tendencies in party cadres, the EPRDF plans to influence the activities of organizations and to recruit their members.

The masses will be organized by sectors including the peasantry, the bourgeoisie, the proletariat, government workers, and ethnic groups.

The most desirable form of Workers' associations are trade unions organized as industrial organizations rather than on the basis of ethnicity or region. The various sectors of the proletariat should then be united in a single umbrella organization.


The EPRDF feels secure about its control of organizations in lower levels of government because they are formed mainly with the involvement of the peasants. Middle and upper levels of government, where there are no elected officials and where intellectuals are involved, are more problematic to the party. Included in this sector are the army, security forces, and the judiciary which will not be under the direct control of political organizations as such. However, according to the strategy document, since these groups are there to promote and indirectly implement the goals of revolutionary democracy, they form part of its strength. The mission of government agencies, as seen by the Front, is to protect the political and human rights of the masses, contribute their share in the implementation of EPRDF development strategies, widen the political influence of revolutionary democracy through their activities, and act as its key instrument in combating the illegal activities of the enemy.

The mission of these nationality-based organizations, is two-fold. On the one hand, they are to disseminate in various languages the same revolutionary democratic (party-line) substance; to translate this substance into practice by adapting it to local conditions; and to rally peasants and other progressive forces around the goals of revolutionary democracy. On the other hand, the ethnic organizations are "to promote the common interests of all the people."

The strategy document takes a final swing at the strawmen chauvinists, ruling classes, secessionists, and narrow nationalists by pointing out why they are adverse to a nation-wide organization of nationality-based organizations. The chauvinist ruling classes, who back the idea of "Itiopiawinnet" (Ethiopianness), would prefer a multi- national organization composed of individuals from various ethnic groups "that have betrayed the causes of their people and bowed to these chauvinists." Narrow nationalists and secessionists "do not want the fulfillment of the peoples' common interests," so they also oppose the proposed nation- wide organization.


The document concludes with self-assured assertions of the rightness and rectitude of the EPRDF cause. The ideologues contend that the Front's revolutionary democratic goals can liberate the majority of Ethiopian society from poverty and backwardness and that they can assure the widest democratic rights and participation in the political system. For the party faithful, the EPRDF's political and economic strategies and tactics "ensure the realization of these goals and the victory of revolutionary democracy."

The document dogmatically states that if the Front's goals do not materialize, "the people will suffer from endless poverty and crises and there will be no single and united country called Ethiopia." Therefore, in order to fulfill the peoples' interests and to ensure the survival of the nation, the victory of EPRDF goals is imperative. The cadres and other participants in the struggle, called "tegadays or "combatants," should proudly stand for such "an honorable cause," and they "must do everything possible in order to courageously and successfully carry out this popular and national responsibility."


THE HIDDEN AGENDAS OF THE STRATEGY DOCUMENT


Behind the facile Marxist-Leninist ideas of the document are the concerns of ideologues under stress. In a world where communism and Marxist-Leninist regimes, with a few exceptions, have faded away, how can EPRDF theorists be true to their Marxist principles and at the same time appease donor nations? In the face of "people power" that said "No!" to authoritarian regimes in so many Marxist states during the past decade, how can a small elite of former guerrilla fighters follow the old communist pattern and boldly proclaim that they know what is best for Ethiopia and its people?

To answer these questions, the strategy document provides techniques for avoiding conflict with "the imperialists" while creating a facade of democracy, the protection of human rights, and free market capitalism. New "masters of deceit" give instructions in how to beguile donor nations and international bodies with what the party appears to do even as the Front follows a very different agenda in its actions.

At the top of the agenda is the party's goal of permanently establishing hegemony. Lacking confidence that the people would accept its self-proclaimed legitimacy, the EPRDF feared "losing the elections even once." Thus, the Front will do whatever it takes to win all elections and to destroy effective political opposition. Backed by an army that is "free and neutral in appearance" but really the EPRDF military, the Front will not hesitate to cite "any relevant legal article" to punish its detractors.

Following Lenin's advice, the EPRDF seeks to "control the commanding heights of the economy." To scale the heights, the Front will get a boost from its two-track public and private powers. Government fiscal policy will reduce taxes on EPRDF-backed forces while "piling up" taxes on others. Front workers will receive "pay and training far better" than others. Trade unions will be infiltrated by party loyalists. Economic "revolutionary democratic" forces, euphemistically companies affiliated with the Front, will "invest as one individual in those economic sectors which have no direct state influence." This use of "party capitalists" is a clever ploy that allows the EPRDF indirectly to play an economic role that the Front knows the West would not let it play directly.

As described in the strategy document, the use to the fullest extent possible of "key propaganda tools," including schools, religious organizations, and mass media is a shrewd scheme to present the Front in the best possible light. The document also cunningly recommends propaganda that "is not openly presented as propaganda" as effective in the party's use.

The strategy document gives instructions in the latest version of the Lenin two-step, a dance for the Front artiste featuring far more than two steps backward to avoid bumping into the forces of imperialism while doing one step forward to demonstrate ideological adroitness for the comrades. The EPRDF has well learned the choreography and, as we shall see, has skirted around Western nations and international bodies on the main dance floor. Meanwhile, the Front continues to affront fellow citizens who refuse to cheer its performance with a crude stomp dance.

1. TPLF/EPRDF, "TPLF/EPRDF's Strategies for Establishing its Hegemony & Perpetuating its Rule," English translation of TPLF/EPRDF document originally published in June 1993, Ethiopian Register 3 (June 1996): 20-29. All of the quotations in this chapter are taken from this translation.