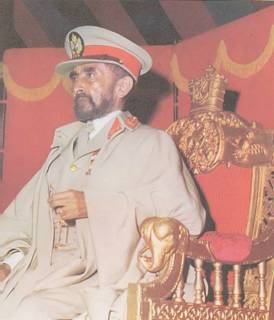 "Throughout history, it has been the inaction of those who could have acted; the indifference of those who should have known better; the silence of the voice of justice when it mattered most; that has made it possible for evil to triumph."

It is to his eternal credit that while the Emperor lived, judgment of progress and of public virtue was made in comparison to an ideal. The core sense of optimism felt then was intense in a way that it is impossible to imagine now.

It was actually expected that Ethiopia would improve year after year. When Haile Selassie’s rule failed in any way it was considered unforgivable, even criminal. Reality seldom intruded on the varied imaginings and plans of what could be easily in hand only if the Emperor were not in the way.

In the three decades since he did get out of the way Ethiopians have learned to expect far less - not only of the future but of the present. Adjusted for inflation per capita GNP is less than it was in 1973. The growth and economic changes of the 1960s and early 1970s have yet to be matched. Coffee remains the source of most foreign exchange and it earns progressively less income. Because of secession and erosion there is far less land now for more than twice as many people to live on.

Discussions of land reform with no reform were rightly condemned during Haile Selassie’s rule. The solution was not Mengistu’s confiscation of all land and Meles’s ongoing grasp of every square meter. They have left most Ethiopians as eternal serfs to their government whose power is thus assured. Land reform is no longer even an issue. The very idea of empowering peasant farmers and of self sufficiency in food has been abandoned beyond press releases and unworkable schemes.

The Emperor left Ethiopia during the Italian occupation and the eventually successful resistance. He would not have served his people better by capture or by death in battle. His actions within the international system meant that Ethiopia’s freedom and unity were not abandoned as the Second World War was won and its aftermath shaped.

He was by no means a democratic ruler. Neither was he a common dictator. He was a traditional ruler in an impatient age. Eventually he stretched the bounds of that rule to their snapping point by encouraging the modernizing forces that he eventually allowed to replace him.

The tradition that he represented was vital and its loss should be mourned. Without it Ethiopia lost her bearings and became lost in a miasma of defunct ideology. Instead of social and political reform that was well underway a radical break was made that still haunts the country with its echoing slogans, wars, broken lives and failed policies.

We must imagine that he saw the forces that rose up in 1974 as somehow legitimate or natural expressions of dissent. Maybe he agreed that the slings and arrows directed toward his government were deserved.

The Wello famine, its cover-up and the resultant shame surely contributed to the lassitude that allowed Ethiopia to be dragged into an era of darkness. Possibly he thought it would all just go on as before with a cabinet shuffle or by land grants to selected rebels.

How else can anyone explain a government of millions with roots stretching back three thousand years ... simply fading away? That was the real tragedy of his reign. The country’s institutions and thoughts raced ahead of the Emperor and he did not prepare for a political future of stable government and more rapid democratization.

Neither did he fight to guarantee what had been so far achieved at such cost by his people. The young Tafari Makonnen who took the throne and embarked on the hazardous journey of modernization would surely not have made that mistake.

What followed him is a seemingly endless nightmare of national turmoil and suffering that may reach its crescendo in ethnic politics. The traditional absolutes of God, Emperor and Country were abandoned in a fevered search, not for solutions, but for new absolutes to answer every question of existence.

The hard earned optimism in the country and in the future was hijacked by the promise of salvation in a new trinity of Marx, Engels and Lenin. The high priests of the new religion did not discover the keys to heaven but did find a glib catechism that justified their own rule and any crime in the pursuit of power. Traditional authoritarian government was far less jealous and brutal towards opposition than the actual or nascent totalitarianism represented by the subsequent occupants of the Menelik Palace.

If we remember Haile Selassie it should be in sober appreciation of his humanity and achievements. The poor service done to his memory and to the memory of a generation of committed patriots who served under him symbolize a great loss for Ethiopia that many are only now realizing.

After every consideration it is clear that Emperor Haile Selassie left his country in far better shape than he found her. That is tribute enough for any leader. He served his people most in giving them a vision of what Ethiopia could rise to during the most promising and bloody century mankind has ever known.

Hopefully his new heirs can see the future in terms of the lessons of the past. The promise of the end of Mengistu's rule is even now being lost. It is not too late.