Our Man in Africa 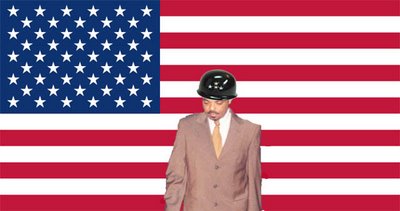 Our Man in Africa ... the Conqueror of the Horn of Africa ... or why sometimes the enemy of your enemy is not always your friend.

(With great apologies to Patton).

We don't have the money to take the burden individually. The international community should provide funding.
Meles Zenawi, Ethiopia's dictator

The Ethiopian government is among the most corrupt in the world.
Transparency International

Ethiopia is one of the United States’ most important partners because it shares and supports many of our strategic goals ... the United States remains deeply concerned about Ethiopia’s domestic political environment.
Donald Yamamoto, U.S. Ambassador elect

The aftermath of Ethiopia’s landmark May 2005 parliamentary elections has laid bare the deeply entrenched patterns of political repression, human rights abuse and impunity that characterize the day-to-day reality of governance in much of the country.
Human Rights Watch

Despite its serious internal flaws, the government of Prime Minister Meles Zenawi did civilization a great favor.
Ralph Peters, columnist

We must stop pretending that Ethiopia is run by a respectable government when in fact it has a murderous and oppressive regime.
Ana Gomes, E.U. Parliamentarian

He may be an SOB but he's our SOB.
President Franklin Roosevelt

All who live in tyranny and hopelessness can know: the United States will not ignore your oppression, or excuse your oppressors. When you stand for your liberty, we will stand with you.
President George Bush

Ethiopia is one of the ten worst violators of press freedom in the world.
Reporters Without Borders

We have now decided not to sell any more Humvees to the Ethiopian army.
Vicki Huddleston, charge d’affairs at the U.S. embassy

The quotes tell the whole story but there is more detail below:

Certainly, self interest guides the foreign policy of any responsible government but what should be done when America's African interests and Ethiopia's very life are in the hands of a dictatorship run on behalf of a tiny and greedy revolutionary feudal aristocracy?

One can assume that some variety of short sighted American interest is being pursued in American foreign policy in East Africa but no such assumption can be made about the behaviour of the Ethiopian regime. No matter how much anyone may want to see that finally at last some Ethiopian interest is being pursued by Meles - that assumption can not be made.

We figured that the Islamists would represent little of a military challenge for the Ethiopian Army and that Somalis weren't fond of them either. A few months ago no one had heard of them, then they were suddenly unbeatable and set to take over the world - now they are on the run in forests and deserts making for the Kenyan border or the Indian Ocean.

As easily as the appeared they disappeared ... and may appear again. After all who has ever been able to predict what happens in Somali politics? Somalia as a country was invented just in time for independence and nurtured on Ethiopia-hatred from birth. Ethiopia-hatred is the one certainty of Somali politics.

In fact, given the clan nature of Somali society there is no other unifying force there - beyond Islamism whose roots in Somalia seem to be shallow. Countless Ethiopian governments going back generations have had to deal with the coastal areas of the Horn of Africa because it has always been a source of trouble.

But - until now no one has ever invaded and occupied Somalia. It is easy to get carried away with a sense of nationalism and patriotism about war. It is seductive to at last imagine a glimmer of decency from the Ethiopian regime regarding the national interest.

But - remember what the Ethiopian regime is all about. How high did Ethiopia's interests rate when the current government from birth was dedicated to the dismemberment and hatred of Ethiopia?

In the concluding days of the war with the Dergue, the TPLF and the Dergue used Ethiopian themes with equal cynicism. During the 1998-2000 TPLF war of independence from the EPLF the same Ethiopian themes were returned too until the first victory at least.

None of them lasted when Meles & Co. were not in crisis. Meles, that eternal arada & ashattiregna (street smart intriguer) is in charge because of his mastery of manipulating and murdering his 'comrades' and fooling ferenjis while ruthlessly killing his opponents.

In every case above, Meles of course.

And suddenly he should be trusted with assumptions of good will about the national interest that he has shown no concern for since 1974? How about these questions - who eagerly embraced Ethiopia's status as a landlocked country in 1991 talks to the surprise of all observers and which leaderly of an invaded country after a bitter victory willingly submitted his land to arbitration by foreigners as though anyone in history has ever done that before?

Why Meles of course.

Beyond a general Marxist-Leninist view of the world finely tuned to getting and keeping absolute power, Meles believes in nothing but his own interests. As the only country on earth with constitutionally mandated tribal divide and rule politics and a false but deadly right to seccession, Ethiopia is by Melesian design being pushed eagerly into the kind of clan mentality that has destroyed Somalia.

Make no mistake there is no Somali government today either that does not serve at the pleasure of Meles and the world knows it. A few weeks ago it almost collapsed even from its position in internal exile guaranteed only by Ethiopian threats. Today that 'government' is in Mogadishu behind Ethiopian threats backed up by Ethiopian guns.

There is no other interpretation of the current situation but that Ethiopia has, for the first time in history, invaded and occupied a neighbor and that she has done so to only the provacation of threats. There is almost no way to see where this will lead in the future but don't expect it to be good. Meles didn't even wait for his secret police agents to stage a terrorist incident before invading.

Ethiopia certainly can't afford this occupation itself and unable to fight an American style anti-insurgent campaign will resort to naked and frequent brutality. Somalis may need little new reason to hate Ethiopia but Meles will do his best to give them yet more reasons and to perhaps unite them for the first time in their history.

The greatest terrorist threat in Ethiopia has been Meles Inc which owns the entire economy, controls all of the livelihoods of her people and strives to occupy the very minds of 70 million Ethiopians. A threat of any type from Somalia has always been assumed in the past as a standard bit of Ethiopian reality - noting that fact is as remarkable as noting snow in Iceland.

Is Al Quaeda a new factor in Somalia? Well, it certainly may be now - but maybe not. Seriously, are we to believe that Somalis or their friends who hate Ethiopia never REALLY tried to hurt Ethiopia before? Historically invading Mahdis and nationalists from Somalia have been just as threatening and always effectively dealt with without a step into the unknown such as invasion and occupation.

From the American point of view this is win-win. Meles is our SOB for now, kicking ass & taking names while the rest of the War on Terror proves to be more frustrating than predicted. For Republicans and Democrats that remains true. The administration wants a clear win somewhere, anywhere and the new Congressional leadership doesn't want to rock the boat lest they do something that actually has ultimate electoral responsibility associated with it.

In a very real sense this was THE BIG GAME that the US has been coaching Meles for since the early 1990s. Meles is as much a creature of Clinton-Blair-Bush as Mengistu was a creature of Brezhnev. Ultimately Meles fooled none of his sponsors in the end about his free market or democratic credentials but they always banked on his willingness to do what he just did in Somalia.

That is what this invasion and occupation are all about. Somali politics has became the ultimate excuse for ignoring human rights in Ethiopia - for who knows how long it will remain so?

Young American men and women are risking and tragically too often losing their lives in Iraq today because the world tolerated a brutal dictator in Saddam Hussein for decades. All the world players big and small figured they could deal with him until it was too late.

Meles is no different except that his threat, while just as lethal, is more local in scale because of Ethiopia's lack of oil money. Indeed, the poorer, weaker and more involved in national and international strife Ethiopia is - the better for Meles because he is like a parasite in search of a weak host.

Because of his relative weakness Meles also knows how to make ferenjis happy by telling them what they want to hear and being for them the very African that they always dreamed of meeting - 'finally an African we can deal with' - or really 'Our Man in Africa'.

Easy victories will turn into a dangerous & gleeful soft contempt for Somalis in the minds of far too many vicariously thrilled armchair victors. To state as we have above that Somalis are divided is a matter of reality. To assume that Somalis will always be weak and divided or that Ethiopian arms will always be victorious or that the Meles or any government will rule Mogadishu or even that the U.S. will support Ethiopian is however, dangerous nonsense.

This was no 'police action' or 'hot pursuit' or 'cross border raiding' - this is all about invasion and occupation. The reason that no one else invaded and occupied Somalia in Ethiopian history was not that it was thought hard to do so but was that eternal question - "what happens next".

'Next' can be played out over days, weeks, months and years (even decades) while the financial burden, the cost in blood, the deaths, the lost limbs and the hatred multiplies. Folks are very hesitant to start wars because it is impossible to tell how they will end.

That is especially true when wars are initiated by governments that have to begged and threatened to treat their own people with decency. What can possibly hurt Meles whatever happens? Nothing really.

The Meles endgame in Somalia as in Ethiopia, is eternal rule, riches and that dubious position of international respect that thugs get for killing their way to the top of their personal heap of bodies. However, Ethiopia is now in a war now with no endgame in sight or even planned for besides more political support and cash in the pipeline for its dictatorship.

Remember, don't believe the hype and remember that there is no Somali government which Meles does not absolutely control. In fact, Meles Inc. owns Somalia for now just as it has temporary custody of Ethiopia.

Here are some links to our other posts on the subject: World War IV, Washington's Lethal Delusions of Stability, Meles Love You Long Time, it is well that war is so terrible ..., Technically At War, Meles's Not So Excellent Adventure, and Our Man in Africa.