The Historic Elections of May 2005 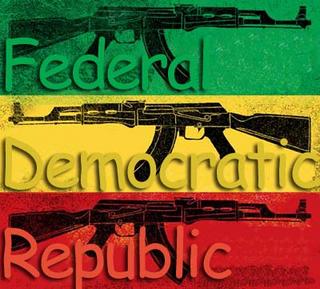 Every Communist must grasp the truth, 'political power comes out of the barrel of a gun.'

Internal documents of Ethiopia's ruling party that were published as "TPLF/EPRDF's Strategies for Establishing its Hegemony & Perpetuating its Rule." From Vestal's Ethiopia: A Post-Cold War African State.

If we lose in the elections even once, we will encounter a great danger. So, in order to permanently establish this hegemony, we should win in the initial elections and then create a conducive situation that will ensure the establishment of this hegemony. In the subsequent elections, too, we should be able to win without interruption.

From the European Union Preliminary Report on the historic elections.

“[P]ost-polling day irregularities, delays and questionable vote counting, as well as flawed handling of complaints and re-runs of elections in some constituencies had undermined the electoral process ... international standards for genuine democratic elections were not met.”

But your average peasant would not be the sage of facing existential challenges if he/she only had one plan. Again you can bet your life that there would at least be a plan B just in case the perpetrator of the injustice was able to get away with murder.

Plan B would start with strengthening the peasants fortress, his/her homestead, so that it can withstand the possible temper tantrums of the spurned perpetrator of the injustice. Having done that, the peasant would plan to treat his/her tormentor with the disdain and contempt he/she deserves and move on with his/her eternal struggle to keep body and soul together.

I believe we can do no less or no better than that. As our brothers the Southern African freedom fighters used to say, in Portuguese, La Lutta Continua! the struggle for a prosperous and democratic Ethiopia must and will go on despite the challenges.

All who live in tyranny and hopelessness can know: the United States will not ignore your oppression, or excuse your oppressors. When you stand for your liberty, we will stand with you.

Time after time, observers have questioned whether this country, or that people, or this group, are "ready" for democracy -- as if freedom were a prize you win for meeting our own Western standards of progress.

In fact, the daily work of democracy itself is the path of progress. It teaches cooperation, the free exchange of ideas, and the peaceful resolution of differences. As men and women are showing, from Bangladesh to Botswana, to Mongolia, it is the practice of democracy that makes a nation ready for democracy, and every nation can start on this path….

Sixty years of Western nations excusing and accommodating the lack of freedom in the Middle East did nothing to make us safe -- because in the long run, stability cannot be purchased at the expense of liberty.

As parliamentary elections approach, the Ethiopian authorities have established new institutions that suppress speech and political activity in the country's most populous regime ... officials have continued to detain and harass perceiced political opponents.

Western diplomatic sources have told Human Rights Watch that precisely because the Ethiopian government reacts so angrily to criticism, the only option is to engage the government on human rights issues quietly and behind the scenes. United States policy is also influenced by Ethiopia’s perceived status as the most stable country in the Horn of Africa and by its cooperation in Washington’s “global war on terror.”

The newly designated U.S. ambassador to Ethiopia told Human Rights Watch that human rights and the "war on terror" are both important objectives for the United States.

But a senior State Department official told Human Rights Watch that Ethiopia's cooperation in gathering intelligence from Sudan and Somalia and in other matters he was not at liberty to discuss is so important to U.S. interests that the U.S. effectively wields little if any leverage over the Ethiopian government.

He said that, although the U.S. is aware that Ethiopia's interests do not always coincide with its own and listens to its partner "with a jaundiced ear," the country's human rights record is "not a factor" in the bilateral relationship "as a point of fact.

In the wake of last week’s election-related protests, the Ethiopian government’s crackdown on potential sources of unrest has spread throughout the country ... While international attention has focused on events in Addis Ababa, opposition members and students in other cities are increasingly at risk of arbitrary arrest and torture.

The United States State Department on the historic elections of 2005

These elections stand out as a milestone in creating a new, more competitive multi-party political system in one of Africa’s largest and most important countries. Because reported election irregularities raised concerns about transparency, we will work with the international community and the Ethiopian government and parties to strengthen the electoral process.

We strongly urge all the political parties to participate in the political process and to play responsible roles as the elected representatives of the Ethiopian people. The governing Ethiopian People’s Revolutionary Democratic Front (EPRDF) has the responsibility to reach out to the opposition parties to ensure their full involvement in governance.

We call on all newly elected members of parliament to take their seats, and to serve under Ethiopia’s constitution. We urge the Ethiopian government and all political parties to address the deficiencies in the electoral process, to avoid violence, and to cooperate in advancing democracy in Ethiopia.

Hegemony is a term derived from the work of Italian Marxist Antonio Gramsci, which refers to the ability of a dominant group to exert or maintain control through a combination of overt and subtle mechanisms. One authority commenting on the Ancient Roman state had this to say

Power is very rarely limited to the pure exercise of brute force.... The Roman state bolstered its authority and legitimacy with the trappings of ceremonial — cloaking the actualities of power beneath a display of wealth, the sanction of tradition, and the spectacle of insuperable resources....

Power is a far more complex and mysterious quality than any apparently simple manifestation of it would appear. It is as much a matter of impression, of theatre, of persuading those over whom authority is wielded to collude in their subjugation.

Insofar as power is a matter of presentation, its cultural currency in antiquity (and still today) was the creation, manipulation, and display of images. In the propagation of the imperial office, at any rate, art was power.

Notice that aside from the should be PM, who was elected, and the actual PM, whose will to eternal power runs counter to the interests of Ethiopians in freedom and development, that every utterance above came from foreigners.

As fate would have it, foreigners, who seem to be washing their hands of Ethiopia's fate, are really the only reason that even the tiniest democratic space was created and that a single Ethiopian on this planet has any human, civil or economic rights at all.

George Bush was elected President of the United States and is sworn to protect the interests of Americans. It is our own tragedy that Meles Zenawi has the interests of Ethiopians as a distant priority to the primordial ideology of despotism that serves as the catechism for the religion of his own eternal rule and that of a tiny revolutionary aristocracy.

Political power may come out of the barrel of a gun right now, but an unintended consequence of the transient democratic space created has been the clear voice heard from the Ethiopian people and the opposition that can't be silenced forever by men with guns.

The government did not win anywhere where there were election observers and re-ran numerous contests held even further in the dark to get the numbers it wanted. It took months of fraudulent counts to overcome the great margin of ruling party loss.

The whole world knows it but because the government has 70 million hostages the world will play along with their captors. Most governments are dedicated to serving the interests of their people but Ethiopians have had to make do with a trickle down form of human rights from foreigners who must confront the Ethiopian government to treat its own people decently.

Even Stalin, Mao and Mengistu played at the game of elections and parliaments. The next elections will be more like those of this government's revolutionary godfathers and this regime's elections in 1995, 2000 and the fake referendum on the constitution.

If the government and ruling party knew they were disliked and needed to coerce a victory before - now they know they are despised and will mete out unprecendented levels of brutality. After all, the only constituency that the tiny revolutionary feudal aristocracy was ever worried about, foreign aid donors, have given them a free hand to stay in power by any means necessary.

Foreigners can't work magic with a government that worships power at the expense of development and freedom. In the end, it is up to Ethiopians, with as much help as they can muster from friends from abroad, to resist this despotim as they have fought foreign invasions for countless centuries.

The Historic Elections of May 2005 will ultimately be remembered for its expression of national unity behind a rational opposition in defiance of a thirty year reign of government orchestrated totalitarian ideologies as well as tribal, religious and regional divide and rule.