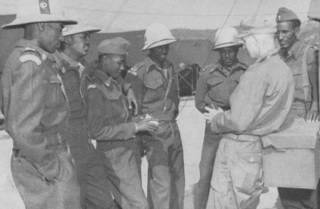 Ethiopian Soldiers in Korea from the Korean War Veteran's Page

This story from a Korean newspaper caught our attention. Hat tip to The Marmot's Hole.

CHUNCHEON, Gangwon province
Veterans of the Korean War from Ethiopia have expressed hopes of meeting the children that were raised in an orphanage they established and maintained during the war.
On a recent visit by a support group to participate in a commemoration day for Ethiopia's Korean War veterans, the men, mostly in their 70s, said the children they supported were raised at the Bowha Orphanage in Dongducheon, Gyeonggi province.
Ethiopia sent 6,037 soldiers to aid South Korea during the war. Some 121 troops were killed, and 536 were wounded in action.
"We have been visiting Ethiopia in the past few years to provide aid to Korean War veterans and every time we went, they asked about the children from the orphanage," said Shin Kwang-chul, general secretary at the Supporters Association for the Ethiopian Veterans of Korean War. "They want to meet the former orphans while they are still healthy enough to come to Korea," he added.
After fighting in the war, the Ethiopians established the Bowha Orphanage in April 1953 and took care of children. The facility was operated from funds that Ethiopian soldiers gathered by donating part of their pay. The orphanage offered shelter 60 to 70 children. What happened to the children after Ethiopian troops went home in 1956 is unclear. There is little documentation.
At the invitation of the Korea Veterans Association, six Ethiopian veterans will visit Korea from June 23 to 28.

Here is an excellent website set up in 'Rememberance of Ethiopian Veterans of the Korean War'. It is a project of the Addis Ababa University Alumni Network. Despite the passage of more than half a century the Kagnew battalions are fondly remembered by those who served with them from around the world and students of history in South Korea. The result of their efforts and those of other United Nations forces is evident in the prosperous democracy South Korea has become and its alternate history just across its northern border. The Korean War veterans page has photographs of the Kagnew battalions in Korea.

This website of The Korean War Project has a page with contact information regarding Ethiopian and American veterans of the Korean War. There is a memorial to the veterans at the Trinity Cathedral in Addis Ababa. For a more recent perspective this frank and interesting interview from The Ethiopian Reporter with the South Korean Ambassador to Ethiopia is worth a read.