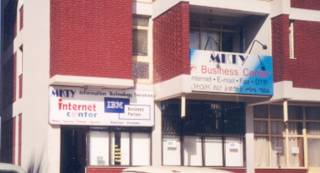 Internet service was first introduced in 1997. By 2002 the "Internet's Presence Felt" according to this article.

Rates for Internet usage, among the half-dozen Internet Cafes that have sprung in the city over the past few months, vary from 75 cents to 4 Ethiopian Birr per minute. This translates to as high as 120 Birr/hour ($15/hour).

But still, this was a site to behold as the promise of the Net was finally available for the tens of thousands of Addis residents who are still in the long waiting-list for a personal account.

In a matter of few days, though, all this was to change, as the Ethiopian Telecommunications Corporation (ETC), the government body which has monopoly over the telecom industry in the country, started clamping on these entrepreneurs by closing the facilities citing obscure and archaic regulations. It seemed ETC felt it was the sole legitimate body in the country to be an ISP (Internet Service Provider) and also Internet Café operator.

Meanwhile in the same week, two public seminars on IT and the Internet were being conducted in the city; one organized by Unity College, the city's newest private college and the other on E-commerce organized by the Addis Ababa Chamber of Commerce at the Sheraton Hotel.

It was in the E-commerce seminar that Dr. Dawit Bekele, one of Addis Ababa's most visible and outspoken IT and Internet evangelist reminded the attendants that Ethiopia is already losing a market-share in hides and skin, for long its second largest foreign-exchange earner, because competing countries are enabling their sellers do a real-time e-commerce trading through the web with current and new buyers.

Ethiopian farmers, businessmen and industrialists face a further isolation from the new digital global economy as access to the Internet remains almost negligible, attendants were told. The case of how Ugandan coffee growers and traders use the Internet to follow the world coffee market minute-by-minute on a daily basis hence gaining a competitive advantage over our farmers and traders was also mentioned here in informal side talks.

Way back in 1996 in this prescient paper "Unleashing Ethiopia's Potential: The Technological Reasons for Open and Competitive Cybercommunications" the author provides other basic rationale for a changed role byt the ETC

in the information age, monopolies are not only no longer necessary, but also would be harmful to the development of cybercommunications in Ethiopia. The main reason for this, we claim, are not economic (though there may be strong arguments on those grounds), but technological. The very nature of the information technologies virtually requires an environment of free enterprise and dynamic innovation.

The appropriate role for the state is to continue investing at ever higher rates in the physical national infrastructure, but allow a wide range of bearers and access providers to operate, whether leasing resources from the state built physical network or building their own alternative physical means of transport. State owned entities could also enter the bearer market as competitors, but these entities would best be clearly separated from those building and owning the physical layers.

Another crucial government role is as a regulator, ensuring the fair and efficient functioning of the market. At the same time, protectionist approaches like blocking foreign ownership altogether are not constructive since that would only distort the market, and encourage corrupt hidden dealings.

Regrettably, even though privatizations are in progress in many areas, recent policy statements by the Ethiopian government have indicated neither a move toward deregulation in the telecommunications sector, nor one toward separation of the operator and regulator functions of the government in Telecommunications.

To the contrary, recent actions have been in the opposite direction, with the only existing e-mail access provider in the country on the verge of having its service taken over by the Telecommunications Authority, and a rumored exclusive deal with a foreign company to provide Internet connectivity of some kind.

The reports above may indicate that development of the internet is actually being discouraged in Ethiopia ... Hold the Presses! ... In this article from August 2004 "Ethiopian Telecommunications Corporation signs $6.7m deal with Dimension Data" we see the story continue ...

The Ethiopian Telecommunications Corporation (ETC) has signed a US $6.7 million deal with Dimension Data to facilitate the implementation of a nationwide broadband Internet project.

Sounds good right? Dimension Data is helping the ETC to increase (by an order of magnitude) the number of internet lines available!

Well ... internet service will still be under government monopoly control which implies ... other forms of control. Since 1996 the private sector, or indeed ETC itself, could have done far more to increase the number of internet connections that have only been promised just this month - if that had been desired.

Perhaps the questions to ask are why the delay lasted most of a decade and why the government is now comfortable with expanding services? ethiopundit has some ideas (suspicions?). More on this soon in the last Information De-Evolution post.