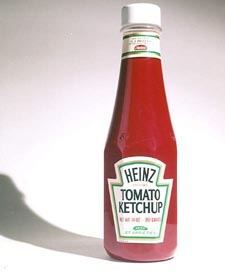 We have gotten a number of emails by those very much amused by our statement about Dagmawi in the post Reality Check that "the world of Ethiopian commentary and opinion is still playing catchup" to him.

We now realize that catchup is the same as ketchup which is a popular condiment. We meant to say 'catch up' as in 'pull even with' or 'approach'.

However, in response to some other emails, our opinion of ethnic, religious, tribal politics remains the same. It is a dead end. Tribal politics of the type practiced by ANYONE in Ethiopia is meant to be divisive and to exacerbate and create resentment and indeed rewrite history to serve the will to power of a few.

Those few in turn expect to trade in the power thus gained into a political system of their own personal liking or to go home with all their marbles in a fit of anger, creating their own country. However unpleasant it may all be at times, Ethiopians are stuck with each other by history, geography and circumstance ... and more of that story is cooperative than any contemporary tribal politics and histories would have us believe.

Without cooperation as well as competition by the Oromo or Tigray or Amhara et al, Ethiopia would not exist today and of course would simply cease to exist in the future. Without them and others it will all fall apart into so many unviable mini-states whose destiny would be failure and suffering for tens of millions.

Ethiopian history gives no evidence at all that such conclusions are in any way valid. Ethiopians have lived too long with the Mengistu, Meles variety of politics where the very existence of the country was constantly in danger if only just a few men did not get their own way.

Atavistic (actually purposefully magnified) ties to ethnicity are really born of the ideology that mentally dissected Ethiopia in search of weakness and realized that every challenger to the power of any given Liberation Front or Scientific Socialist or Revolutionary Democrat could be greatly weakened by tribalism. That is if such tribalism was made the norm.

ethiopundit is not denying the importance of ethnicity. It is a profound and necessarily respected aspect of every person. However, that aspect of identity is more often than not manipulated with the classic aim of divide and rule. By falsely wrapping themselves in an ethnic mantle tribal politicians seek to protect themselves from legitimate opposition from every source - especially from within.

One of the greatest dangers of 'tribal liberation' is that normal disagreement becomes a visceral matter of punishable disloyalty and dissenters at every level within the group needing 'liberation' become official traitors. What kind of democracy can find a home in a liberation front to begin with? History provides almost no such examples.

The notion that ONE voice speaks for an entire people / tribe / religion /region is deeply offensive and must be utterly rejected for any Ethiopians to have a future not defined by privation and conflict that take on the permanence of tradition.

By the logic of secession embraced by TPLF and OLF alike, not only can every 'nation, nationality and people' leave and form their own country at will but so does every neighborhood soccer club having a winning season or a bad season for that matter.

Where will 'self determination' end? Will the Oromo of Gondar or a self appointed group that says it speaks for them have the right to drop out of Oromia at will or the right not to join Oromia to begin with?

Or (using old provincial names) how about the Oromo of Wallega and Tigray and Harar and Gojjam and Arussi and Kaffa and Wollo and Shoa and Bale and Western Europe and North America? Do they all think alike? Are they all alike beyond the justified pride they have in their heritage? How about folks with an Amhara, Tigrayan, Gurage or Somali parent?

The TPLF is of course insincere on the secession issue. It presents national disintegration as a threat by having the legal system of a nation on the edge of chaos. However, the all powerful extra-legal party, security and armed forces allegedly prevent that - only as long as the Gibee wants it that way.

Beyond being anti-TPLF what does the OLF have to say to Ethiopians (yes, such a category of humans does legitimately exist) that proves that they are different than every other liberation front that has ever been out there promising the moon but bringing horror in its wake?

The organization's mission statement speaks of the group embodying efforts since 1973 by "Oromo nationalists to lead the national liberation struggle of the Oromo people against the Abyssinian colonial rule".

Oromo themselves were as much authors of Abyssinian or Ethiopian history as Amhara or Tigray were. Modern Ethiopia is absolutely defined by Oromo involvement in the political and cultural scene of the old Empire that created a wholly new reality for all.

Nor was all of history experienced the same way by all or even most Oromo, Amhara or Tigray. Oromo are in every corner of the country in great numbers while there have been Oromo Emperors, rebels, generals, aristocrats, villians, colonialists, heroes, saints, sinners and patriots, just as there have been Amhara, Tigrayan and Agew ones - to mention just a few groups.

No people on earth are as simply defined as the OLF would have the Oromo be. Defining Ethiopia's most naturally democratic culture made of fierce warriors and peaceful neighbors alike in terms of 'black colonialism' takes a fraction of the Oromo experience after the latter 19th century and makes it a universal one for the convenience of familiar dead end liberation revisionism.

The OLF statement on the AFD is far more hopeful and mentions Ethiopia as a somewhat possibly legitimate entity. Is this a tactical or strategic or even a simple propaganda decision? While the OLF is certainly a more legitimate group than the TPLF Oromo front group, one must wonder if the AFD has made the OLF a far bigger deal than it ever was?

Does the AFD imply that other opposition groups recognize the OLF as the sole or pre-eminent representative of Oromos when that is obviously not the case? Has anyone consulted the Oromo / Ethiopian people about this? Will every political disagreement within AFD be subject to threats of national disintegration as a routine tactic of negotiation?

Having said all of the above we must add that we most desperately wish to be wrong in our judgement of the OLF. Sorry, but decades of tribal / revolutionary theories and policies from every direction have filled us with an absolute dread of self styled 'liberation fronts'.

Such organizations have done great harm to the 'people' themselves because they can never seem to drop the motivations and policies that were more popular but never appropriate during a different era of the all too recent past.

It is far past time to leave behind such dated ideas such as tribally based politics and to never again allow them to influence and govern the lives of men.

It seems that the OLF has skipped the worthy challenge of further redefining Ethiopia, in even its own interest, in favor of the familiar dead end rhetoric of liberation.

The litany of questions thrown about above need answering and debate in the open. Not because they were written here but because they are already being asked and new ones formulated in the minds of anyone who has even heard of the AFD.

Like we said, we very much hope that we are wrong about the OLF... and either way the AFD may not make much of a difference one way or another. We believe that the spirit and unity of the opposition across all of society goes far beyond such matters.

Here is a Kinijit statement about AFD: A PERFECTIBLE, PROGRESSIVE MISSION

Also from Kinijit The May 15, 2005 verdict on the viability of ethnic-centered politics in Ethiopia.

In the Ethiopian Review Messay Kebede's article The win-win nature of the Alliance for Freedom and Democracy clearly disagrees with us.

Enset in the post Article 39, AFD and the Oromo Liberation Front takes another reasonable look at this subject.

Dagmawi in Chimpanzee Politics and the Alliance for Dismemberment is rightfully worried and usually right.