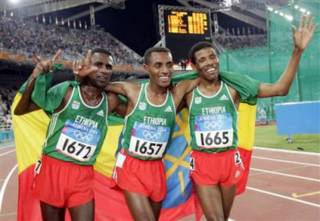 Meanwhile at the Olympics "Bekele leads first day of athletics"

The 22-year-old phenomenon also broke Gebrselassie's Olympic record to round off a year in which he also seized his compatriot's 5 000 metre and 10 000 metre world records to follow his snatching of the world 10 000 metre title from his countryman last year.

He now stands on the threshold of becoming the first athlete to do the 5 000 metre-10 000 metre double since compatriot Miruts Yifter achieved the feat at the age of 40 in 1980.

"Welcome Back, Europe" by Victor David Hanson on the overdue American troop withdrawals from Europe.

Deki-Alula is a good Ethiopian news and opinion source.

who was one of the most influential (and controversial) African Americans in history. Raised the son of a slave mother, Washington was self-motivated and committed to his own education from a young age. The tumultuous time in America's history during which he lived afforded him new freedoms that came from Abraham Lincoln's Emancipation Proclamation of 1863 and the eventual success of the North in the Civil War. He took the first opportunity to attend a formal school, Hampton Institute, which led to professorship and the founding of one of the most prestigious African American educational institutions of the nineteenth century, Tuskegee Institute in Alabama.

Ethiopian police are investigating an explosion at the ministry of education in the capital, Addis Ababa.
No-one was in the government building when the blast occurred late on Wednesday night.

There were no injuries and no group has admitted responsibility for carrying out the apparent bombing.

There have been a number of bomb attacks in recent months, blamed on the separatist Oromo Liberation Front (OLF).

The OLF has been fighting for the independence of the southern Oromia region for more than a decade.

The Oromos are the largest ethnic group in the country and make up almost 40% of the population.

One of the pilots, Meseret Ephrem said she preferred working in Ethiopia, although she had at times been tempted to take employment in the U.S. to repay the 120,000 Dollars her parents had expended on her piloting courses.

Public relations head with EAL Getachew Tesfa said training pilots locally is indeed costly, and described the act of the pilots from the U.S. who joined the airlines as magnificent.

The first-ever public display of Lucy, a 3.2 million-year-old fossil discovered in Ethiopia, is scheduled for Houston in 2006

The fossil makes up about 40 percent of a skeleton of a woman who died sometime between her 25th and 30th birthdays. She is the "most complete, best-preserved skeleton of any erect-walking human ancestor that has ever been found," according to "Lucy: The Beginnings of Humankind," a book co-written by Donald Johanson, one of her discoverers.

Johanson and other anthropologists who unearthed the fossil at Hadar in 1974 named her after the famous Beatles song "Lucy in the Sky with Diamonds" during a celebration over the find with music and beer. The skeleton, according to anthropologists, indicated that our ancestors were upright before the earliest stone tools -- and before the brains of such hominids got bigger.

Recent rainfall and increased distribution of aid have improved the immediate humanitarian situation in the country, but additional pledges are still required to cover an 11 percent food shortfall in the June-December period, a famine alert network has reported.

The number of Ethiopians in need of food aid has risen to more than 7.6 million as a result of crop failure and lack of pasture following poor or erratic long rains earlier this year, the country's disaster prevention commission said.

The commission stated that 65 people, almost all of them ethnic Anyuaks, were killed in fighting over a weekend in Gambela town. It had been sparked, the report said, by an attack by Anyuak gunmen on government refugee workers in which eight people were killed. The bodies of the men – who were non-indigenous highlanders – had been mutilated in the attack, which took place a few kilometres outside town on a road leading to a planned new refugee site.

Their bodies were taken to the town, where brutal reprisal attacks on Anyuaks then took place. The commission said highlanders – immigrants from others parts of Ethiopia – attacked Anyuaks with axes and iron bars. The local police was completely overwhelmed by the violence, and several hours elapsed before the army stepped in. But fighting also spread through the region, with attacks claiming the lives of several hundred people, the government said at the time.

"Djibouti worries over AIDS from Ethiopia"

We cannot control HIV in Djibouti unless we control it in Ethiopia," said Dr Mohamed Ali Kamil, director of the Health Ministry's Prevention Department.

When prevalence is higher than one percent, we call it a generalised epidemic, and to see a young man dying of AIDS is very disturbing.

In September 2003, Djibouti expelled 100,000 immigrants, most of them from Ethiopia working as labourers and sex workers. Officials say some of those have returned to work at night clubs and other place of entertainment.

"Child Prostitution `Rising Problem With No Due Attention"

Ethiopian law regarding child prostitution is clear and on the whole ahead of its time. But, with the law not being enforced, child prostitution has been an open secret shunned by the law, culture and religion but not exposed and stopped when it counts

A special Bar and Bat Mitzvah group celebration took place in the northern Galilee community of Safsufa earlier this month, for the third year in a row. The Bar Mitzvah boys and Bat Mitzvah girls were young immigrants from Ethiopia living at the Jewish Agency's Ayelet HaShachar Absorption Center.

Weird Foods from Around the World

The Science of Cooking

Race the Power of Illusion

"French Photojournalism Festival to Display the Most Important Photos of the Year". The No Pasaran blog's images of the pictures that the festival will ignore are illuminating.