The Greatest Story Ever Mistold 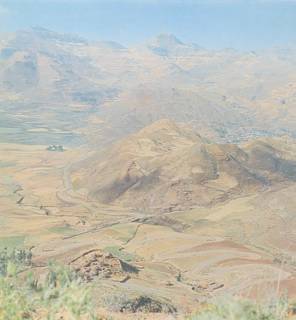 Why not here?
After 72 years of communism, Russia is once again a grain exporter...in Ethiopia food insecurity as policy

David Boaz, the executive vice president of the Cato Institute wrote the article "The Greatest Story Ever Mistold" about a recent Wall Street Journal report. Titled in part "New Farm Powers Sow the Seeds Of America's Agricultural Woes", (no link available) the WSJ article detailed changes in the worldwide food market while noting potential threats to the American pre-eminence as a producer of wheat. Mr. Boaz felt that the positive implications of the changes and of the article were being ignored. Here are some of the points he made

This article is the latest chapter in the greatest story ever told: the struggle to produce enough food. From time immemorial, humans have endured back-breaking labor just to get enough to live on. Starvation was a constant threat. Now, thanks to free trade, free markets, and the green revolution, starvation is becoming a thing of the past. The world can support six billion people.

Part of the problem is the misguided notion of trade as a competition, or even a war. Note the terms like "economic clout," "wheat powerhouse," "economic might." But trade is not a zero-sum game. Everybody wins when more goods are produced. The story of economic progress is the tendency toward increasing specialization and division of labor.

China, in a drive for self-sufficiency, has become the world's top wheat producer and is nurturing a sophisticated biotechnology program. India, a land long-associated with hunger, became an important exporter three years ago when it released part of its huge wheat reserves onto the world market.

And Russia! After 72 years of communism, Russia (along with its former internal colonies) is once again a grain exporter. We hear lots of bad news out of Moscow these days, as President Vladimir Putin arrests and intimidates political opponents and journalists. But this news probably matters more to the Russian people. There's food aplenty, and you don't have to stand in line for it. And why? A newly privatized Russian farmer tells the Journal:

"Freedom," he says, inhaling deeply on a cool spring day. "You're working for yourself."

(S)tarting with Deng Xiaoping's reforms after the death of Mao, Chinese agricultural production soared -- so much so that peasants began leaving the farms, going to the cities, looking for jobs, and setting up enterprises. Despite his Communist Party years, Deng may have done more good for more people than anybody else in history. Thanks to his reforms, over a billion people can now not only feed themselves but export food and shift labor to more productive uses.

The positive-sum character of trade is the very foundation of the liberal world order, the underpinning of expanding trade, international harmony, and peace. If one country's success was another's woe, then the socialists and nationalists would be right: World trade would be a war of all against all. Thankfully, they're wrong. The growing productivity of China, Russia, and India is wonderful news for their two billion citizens and good news for everyone else in the world economy as well.

Througout the Soviet and Maoist periods in Russia (and her satellites) and in China, food insecurity and even famine were the normal state of affairs. Some Soviet agriculture reforms after a disastrous harvest in 1963

Prices paid for the procurement of agricultural products have been raised, restrictions on the use of private plots liberalized, taxes reduced' and pensions and cash payments in advance of the harvest authorized for the agricultural population.

Such measures have given the kolkhozniki new incentives to supply Russian towns with the vegetables, fruit, meat, butter. and eggs needed to feed the working population. The productivity of Russian agriculture, however, remains on a low level in comparison with that of many other countries and requires an agricultural labor force six times larger than that of the United States to produce a smaller total agricultural output. Furthermore, much of this output comes from private plots, which in 1964 accounted for 3% of the area under cultivation but produced more than 40% of the milk and meat output, 60% of the potato crop, and 73% of the egg production. The Soviet system clearly appreciated the role that the even minimal enfranchisement could play in increasing production. They turned to it in 1963 just as Lenin did with capitalism in the form of the NEP (New Economic Policy) to save his infant revolution.

The inherent contradictions of their own Marxist - Leninist - Stalinist system forced them to make a choice. Reform the system or let millions starve. Stalin made the latter choice and even encouraged starvation as policy. His heirs tinkered with reform because genocide was no longer an option, even for them.

To feed itself the Soviet Union had to become dependent not only on the profit motive of its farmers but in the end on grain imports from the West. Both of these solutions were bitter pills to swallow for the Soviet leaders because quite clearly - communism wasn't working.

They stuck with it though because the purity of communism wasn't at issue. Dicatorial power was their alpha and omega. Communism was important to them because it guaranteed their power while justifying it as effectively as a Medieval lord tortured his people with a sense of divine right.

Why is this important today? We all generally accept that knowing history will help prevent us from repeating it. More to the point, there are 70 million long suffering Ethiopians living under a variation of the Soviet system today.

Ethiopians live with food insecurity so that their rulers won't experience political insecurity.