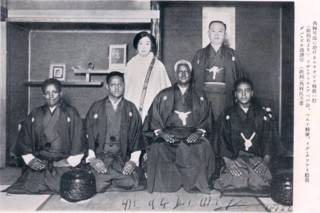 Front row, right to left: Lij Araya Abeba, His Excellency Heruy, Lij Tafari, and the interpreter, Daba Birru. On the back row are Mr. and Mrs. Sumioka. Picture taken from Heruy’s Dai Nihon.


In the Selected Annual Proceedings of the Florida Conference of Historians for 2004, a fascinating paper was presented by Professor J. Calvitt Clarke III. Titled "Seeking A Model For Modernization: Ethiopia's Japanizer's" it is a window into an almost forgotten Ethiopia.

The story begins after the 1896 victory over Italy at Adwa in the Tigray region of northern Ethiopia. If you don't know much about this battle Professor Donald Levine outlines its historical significance in his article "The Battle of Adwa as a "Historic" Event". Ethiopian Filmmaker Haile Gerima made an exceptional documentary about the battle; "Adwa: An African Victory" in 2000.

Some excerpts from Professor Clarke on the Japanizers

In the early twentieth century, these foreign-educated Ethiopians (the Japanizers) generally sought positions at court, and many of them refused to share the complacency of their countrymen after Ethiopia’s military victory over Italy at Adwa in 1896.

The term (Japanizers) highlighted the impact of Japan’s Meiji transformation on Ethiopia’s intellectuals. Japan’s dramatic metamorphosis by the end of the nineteenth century from a feudal society—like Ethiopia’s—into an industrial power attracted them. For these young, educated Ethiopians, Japanization was a means to an end—to solve the problem of underdevelopment. Japan’s rapid modernization, after all, had guaranteed its peace, prosperity, and independence, while Ethiopia’s continued backwardness threatened its very survival.

In 1932 after an official visit to Japan, he published Mahidere Birhan: Hagre Japan [The Document of Japan]...Of the Japanizers, he most elaborately compared Ethiopia and Japan. Both had been ruled by long and uninterrupted founding dynasties: Hirohito was the 124th monarch of the Jimu dynasty while Hayle Sellase was the 126th ruler of the Solomonic dynasty. He compared Emperor Menilek to the Meiji. In the entire world, only Ethiopia and Japan had preserved that long the title of "emperor" to designate the chief of state.

Both countries had experienced roving capitals in their histories. He compared the Tokugawa Shogunate to the Zamana Masafent: the only difference was that while the overlordship of the Yajju lords had been confined to Bagemder, while the Tokugawa exercised authority over all of Japan. The manners of the two peoples were similar. Heruy went on to conclude that, despite these similarities, the two countries had long lived in mutual ignorance of one another—much as do the two eyes of one person. Just as a mirror helps one eye to see the other, so too his visit to Japan had brought mutual awareness between the two countries.

With only a couple of exceptions, when comparing the 1889 Japanese constitution and the 1931 Ethiopian constitution, even the chapter divisions were identical, and in both cases, the guarantees of civil liberties were constrained by nullifiers such as, "within the limits provided for by the law" or "except in cases provided for in the law."

A figure of underestimated importance in the Japanizer movement was Araya Abeba, a member of Hayle Sellase’s family. If he is remembered at all today, it is for his proposed marriage with a Japanese, Kuroda Masako, a subject of great mirth and greater fear among many European observers. A handsome young man in the 1930s, in truth he played an important part in Ethiopia’s relations with Japan, and he gives every appearance of being groomed for greater things until the Italo-Ethiopian War intervened.

By the first half of the 1930s, Japan and Ethiopia were drawing closer together to the acute concern of all of Africa’s colonial powers, most especially Italy.

The crucial force behind Ethiopia’s desire to use Japan as a model was the emperor himself. His father, Ras Makonnen, had studied foreign military literature, and Russia’s defeat by the Japanese Navy at Tsushima in 1905—following as it did in Ethiopia’s footsteps by defeating a European power—surely electrified him. By 1906 when Ras Makonnen died, the thirteen year-old Teferi apparently had already developed a mental blueprint for his goal. An essential part of it was to draw upon the Japanese model, that other empire, which had proved that a non-European nation could embrace modern civilization and stand culturally and technically on par with European countries.

Professor Clarke goes into great detail about Ethiopian history and her relations with the United States and the European imperialist powers of the time. The many historical convergences and divergences with Japan are also detailed.

It all makes for fascinating reading but we are delighted that this alliance did not pan out. Contemplating an Ethiopia morally bankrupted by such an alliance in the Second World War is simply too bloody awful to imagine. We have to make moral judgements about alternative history as much as we have to do about history.

The time for close relations with Japan and for learning lessons is right now.