Meles Has A Party & A Parliament

A fly is as untamable as a hyena
Ralph Waldo Emerson 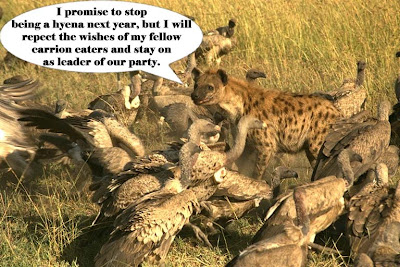 I do not believe that Mr. Meles is going to quit. He is simply posturing. Here are reasons why?

An official who is determined to quit will not qualify it by another possibility. An excellent example to announce quitting: “I shall not seek, and I will not accept, the nomination of my party for another term as your president." This, as you know, was President Lyndon B. Johnson's announcement on March 31, 1968 after the setbacks of the Tet Offensive and the violent student demonstrations against the war in Vietnam made his life unbearable.

Mr. Meles is saying he has decided to quit but will respect his party's decision regarding it. Anybody knows that neither the current TPLF leadership not what remains of the EPRDF officialdom can survive for long without Mr. Meles' political machinations. What he is saying is, I will say I will quit and my party caucus will put pressure on me through parliament. Then I will have little choice but to respect their wishes!

Mr. Meles' posturing is more in tune with that of Gamal Abdel Nasser. When the Egyptian President’s army was decimated in the Six Day War by June 9, 1967, Nasser tendered his resignation as President in a televised broadcast only to “change his mind” when his decision was “rejected” by Egypt's National Assembly totally controlled by his National Democratic Party. So, come 2010 elections, rest assured that history will repeat itself.

We agree with Professor Milkias.

Furthermore, we are always shocked whenever anyone takes anything that Meles or his cadres say seriously. When has Ethiopia's dictator been known to tell the truth about anything?

Meles is not the Prince of Liars - he manages all at once to be the King, the Pope, Der Commissar, and Mother of All Liars. Expecting anything remotely resembling the truth from him about his leaving his revolutionary democratic throne is ... to be kind, rather unrealistic.

Meles is the party and he is the parliament - actually given the way he rules Ethiopia, Meles is for all practical purposes - the only person in the whole country with any freedom of will. EthioMedia puts the relevant stories together on one page. Check these quotes out and wonder how he could keep a straight face delivering lines like these.

I do not think there is a conflict of policy here. My desire is that I have had enough here and I have to move on. I want to leave this position (Prime Minister) without leaving the party as leader but I have to respect the decisions of the party,
...
I cannot be a member of the party and not respect its decisions. My open decision is that there will be no conflict between my position and that of the party. If there is a conflict, I will have the freedom to chose but I will try to resolve the differences[.]

The reporter himself can be imagined alternatively grinning and being poker faced in joy at his scoop. His willingness to ignore - or his simple ignorance - of the reality of dictatorship made it all good.

Or perhaps he knows this is lethal nonsense and is just doing what thousands of other ferenjis and Ethiopian cadres have done with the words of Meles - accepting them unconditionally. From Presidents to Prime Ministers and Rock Stars to Nobel Prize Winners - the reporter is in good company.

Meles won't even try a Putin like arrangement - as the man who climbed to the top of a business and party founded on terror and who climbed over countless dead and destroyed in his party and the whole country to get where he is - he knows that even pretending to let the tiger's tail go will be far too dangerous for him.

Without his secret police, informers, personal militia, access to billions squeezed from poor Ethiopians and waylaid from rich ferenjis, and his official role as the ferenji's "African we can deal with" paid for with native blood, sweat, and tears - Meles is nothing and he knows it.

But ... maybe he plans a retirement in the USA. If precedent and past ties hold true he has his pick of senior spots at the World Bank, the IMF, Columbia University, the National Security Council, the Senate / House Foreign Relations Committees, or any one of many lobbying firms - just waiting for him.

Of course ... if he wants to he can retire comfortably and manage his massive investments, numbered accounts, and real estate all over the US and Europe. After all he has an MBA earned in between ordering executions and alternatively braying on about bumper crops, endless starvation, double digit economic growth, desperate poverty, and his American Knighthood as an Official Warrior on Terror.

[h]ad we indulged on her assumptions the message that we would have conveyed would be 'nothing happens to you no matter what you do. If you have friends in all the right places, you can ride roughshod with everything'
...
That message I think is a very dangerous political message to convey in an emerging democracy. The rule of law and equality involves everyone.

Amazing. The only reason any Ethiopian who has not accepted Meles as their personal savior or who doesn't just keep out of his way is alive is because ferenjis occasionally care about Ethiopians that they meet in person and that they beg and threaten Meles not to do his dirty work in their sight.

He only rules because the Ethiopian social contract is between him and ferenjis. Aside from those he has bought and intimidated - Ethiopians in general have nothing to do with his rule but endure it. Meles ends on a more frankly comical note

We took Ethiopia into one of the seven few elite states with a higher economic growth rate in the world, that is an achievement.
...
We expect inflation in the single digit rate by June or July.

The IMF also gets into the act

The International Monetary Fund has predicted 6.5 percent growth for Ethiopia in 2009.

The only reason inflation gets a mention is that it is so high even Meles can't order it away - or can he? Anyway, it makes him look in charge like a civilized leader to talk like this.

So ... how can anyone predict with such accuracy the rate of inflation half a year from now or the state of an economy a full year from now? Simple .... they just make it up.

Meles just lies and everyone under him just makes up and reports false numbers. The IMF has all kinds of sophisticated socio-economic, psycho-sexual, climate-market models into which they quite willingly enter those false numbers.

Why? Because pumping out aid dollars and getting along with thugs is their business.

We once got this bit of wisdom born of suffering from a group of older street kids comparing Meles Inc. / EPRDF to the Dergue, "a bunch of flies who'd already had their fill of our wounds were replaced by new ones."

Here are some other excellent sources for news, commentary, and opinion: