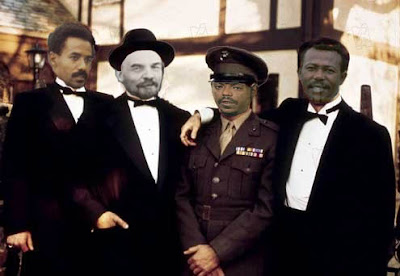 At dinner one night in Adams Morgan a few years ago we heard a story about an African Student's Convention in a radical chic European University town sometime in the early 70's.

The best and brightest youth of Africa came from all over Europe, North America, and the University in Addis - all in their very tightest bell bottoms and towering afros. By day most of them worshiped at the altar of Marx, Fidel, Fanon, and Ho Chi Minh in discussion groups and by night turned their attention to the cheesy discos and sometimes willing coeds of that striving to be hip corner of rural France.

The Ethiopians (note that back then Eritreans were part of that group) joined the earnest debates of the long days about which was really more evil: neo-colonialism & imperialism or just every American & European who did not admit the West was evil.

But ... during the even longer nights the Ethiopians stuck to it instead of partying like the others. They went on and on delving deeper into Bukharin, Luxembourg, Mao, Kim Il Sung, Che, Engels, Trotsky, and Angela Davis.

You see, Ethiopia, either whole or in pieces would be a paradise after the revolution - if only they themselves were the ones to run it all. Abiding hatreds and an abiding devotion to lies were formed those nights. Some of those young men and women went on to kill others present in the streets and fields of Ethiopia - literally.

How was it that many of those same Ethiopians just like too many like them went on to slaughter each other and hundreds of thousands of others while their dreams became a nightmare for millions? The better question is to wonder how anyone ever thought that the totalitarian dreams of such arrogant young proto-warlords could produce anything but terror.

The truth is that lost in a veritable supermarket of Traditional, Western and other ideas a generation of educated Ethiopians never found their way past the ideological crap aisle. It is tragic and terrifying that such a glib and silly catechism, itself the detritus of the West that the same youth despised, could make so many otherwise normal people become so utterly delusional and frankly murderous.

Marx was a curious but deservedly obscure writer who attempted to come up with the unified theory of not only humanity but reality itself and succeeded as well as anyone would have expected such an endeavor to. When everyone owned nothing history would end and we would all live in eternal paradise ... yeah, right.

Lenin took Marx and used him to begin a war against humanity. He saw men as pegs whose bodies and souls could be terrorized into unnatural shapes to fill whatever holes in realilty denied him absolute power. According to the author of The Origins of the TPLF

The experiences of the Bolsheviks’ Russia, Maoist China, Ho Chi Minh’s Vietnam and Che Guevera’s internationalism were espoused as guiding precedents to redeem Ethiopia from its predicament. The revolutionary student generation of that time was, as it later proved, ready to make any sacrifice to undo the grip of imperialism and feudalism in the country. This revolutionary fervour was part of the international wave of the 1960s. Marxist revolutionary ideals were thought to be impeccable, the only appropriate guiding tenets through which the country was to be transformed from its backwardness.

How could those students or any even casual observer of history not have known about the genocidal human cost of the Soviet gulag and Stalin's collectivization, of his purges, Mao's mass murder under the guise of the great leap forward that continued under his failed cultural revolution, of Ho Chi Minh's bloody North Vietnamese land reform or even of Che's lonely death in a Bolivian 'people's revolution' that the people wanted no part of?

And wasn't it blindingly obvious that this horror happened everywhere justification came in the name of 'the people' no one ever consulted? At a minimum did they not see the obvious fact that streams of refugees never headed into Communist countries but rather out of them and that their might be some lessons to be learned from that reality?

A short answer is that reality, suffering and history did not matter as much as their collective vision of paradise and the role that they, as the vanguard of the anointed revolutionary class, would have in mankind's march to perfection . That such a scenario would guarantee absolute power to those who managed to survive the brutal Darwinian jungle of revolutionary politics must have been attractive as well.

Those young men and women were warlords in training dedicated to a stupid idea and willing to deny any morality to achieve it. For 'the people' of course. One can debate whether or not the will to power of that group was either spurred or facilitated by the radical dreams of Marx & Co.

In the end it is all connected. For the bloody minded ones who climbed to the top of the heap of bodies, self hatred founded in still fresh encounters with the outside world combined with the manipulation of convenient religious / tribal / regional differences.

Crucially the convenience of a new religion anointing them personally with eternal power, however red they were in tooth and claw from the blood of innocents and those just like themselves, was something their simple though clever minds and stunted morality could not resist.

The fact that they are killers who aspired only to dictatorship was definitely enhanced by their ideology - actually it defined them because those like them in every corner of the globe had the same type of body count.

That is also exactly who they are now - their ideology is not a promise to make the world better but it is one to justify whatever they do in the nicest most passionate words possible. Even as crooked business men and the founders of revolutionary aristocracies they are true to the cause as Kim Jong Il and Juche are.

Ultimately, even opposition to the post-1974 Marxist-Leninist military dictatorship was largely an argument over who the 'true communists' were - the tribal / regional or the junta variety. Endless war resulted and it has yet to end. The dinner story ended with two jokes - actually one observation and one joke:

While everyone took turns trying to grab the bill the entrepreneurial businessman of the group noted that the most lethal type of Ethiopian was one who had studied economics / sociology or take any university course anywhere besides Russia. You see, those who studied in the Eastern Bloc knew it was all a bloody failure - one had to study where capitalism actually worked in the West or somewhere where none of Marx's observations remotely mattered like Ethiopia to worship the serf societies that Lenin and Mao made.

It was raining on 18th Street when we left and not one of us had an umbrella. The veteran of several of Ethiopia's alphabet soup of revolutionary organizations (EPRP & TPLF were the only ones that he actually admitted to) who had told the story had been quiet as we discussed it. Outside he stepped past everyone huddled under the awning. As the rain beaded on the fringes of his bald head he turned back, smiled, and told us not to worry because after the revolution he would personally make sure that everyone had an umbrella.

The universal response? "Don't start that here! Where are we going to escape to as refugees from America?!" We - the youngest there - didn't quite get it then but now, years later, really do get.

So in this series of posts, we will, by the numbers, from widely available sources, see what was accomplished over the past third of a century by the class of '74. Mind you, we are not arguing that the Imperial government was part of a golden era.

However, we are pointing out that by most indices of basic human civil and economic development, things have gotten worse or have not improved. Especially compared to what any flavor of non-ideological government could have achieved.

Few of the other Afro-Radicals went as far and as passionately into the revolutionary night as Ethiopians did. Look at the map of Africa today and note even in that sad continent who are the least free and the most poor.

It is still far easier to destroy than it is to build.