Despicable In Any Other Country 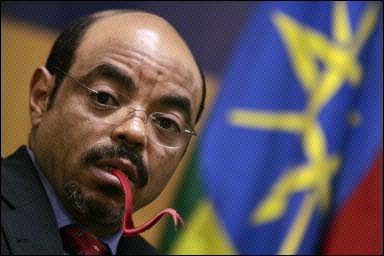 Things have changed a bit since Tony Blair and Meles Zenawi were 'best friends forever' or have they really changed? This week Britain threatened to cut its £130 million annual aid package to Ethiopia amid greater British concern for the fate of Ethiopians than that of Meles Inc.

The British representative (from AFP & the Times via Ethiomedia)

characterized the Government's reaction to the crisis as “deny and delay,” fueled in part by Ethiopia's extreme sensitivity to its global image as a famine-stricken nation, which the Government views as an impediment to foreign investment.

Mr Alexander saw the sensitivity at first-hand on his trip to Somali when he was taken to the infant malnutrition ward in Kebri Dehar hospital to see seriously ill mothers and babies being treated.

Aid workers were surprised to find that the most severely malnourished babies and their mothers had vanished from the ward where they had been for several days, leaving only one mother and her fast-recovering child.

The health worker who had taken them to the hospital expressed fears that the children had been spirited away before the minister's arrival to avoid “embarrassing” press pictures of starving Ethiopian babies.

“I come here every day and they are always here,” the health worker said. “I don't know where they are now.”

“They've hidden them,” an international aid worker with a lot of experience in the region said.

“The Government doesn't want to acknowledge this crisis because it's bad for their image. It's not the image of Ethiopia they want to project. It doesn't encourage investment.”

Mr Alexander raised the incident later in his meeting with Mr Zenawi. “If it's true that they moved severely malnourished children, that is unconscionable,” he said. Mr Zenawi promised to investigate, calling the incident “despicable”.

This is sort of like O.J.'s passioned search for the 'real killers of Nicole Simpson. What is really despicable here is Meles and the totalitarian system he set up thirty four years ago in Tigray that metastasized to the whole of Ethiopia seventeen years ago.

Back then he accepted the EPLF use of food as a weapon against Tigrayans, purged or killed any who complained, while simultaneously he was deeply offended that Mengistu did the same. Seventeen years later he is busy using food as a weapon with no one else to blame. Throughout Meles has made his image with ferenjis a top priority aided and abetted the whole time by how willingly they played along.

Aid workers can't work in the Ogaden region unless they promise to keep quiet about mass human rights violations. Meles gets invited to the G-8 as though he were civilized and downplays his engineered famine. Notice the pattern here?

Anyway, what is the purpose of foreign investment if it has as an attached price like mass starvation? Well - Ethiopian has less per capita foreign investment than Somalia does and beyond headlines about flower plantations that don't mention whose land is being taken away or the working conditions on them - NO ONE without a part in rigging the game with corruption is willing to invest in Ethiopia.

"candid and forthright" message – diplomatic code for a blunt rebuke.

[The British Minister] said he would reject official advice and decline to make a cast iron pledge of future aid to Ethiopia. "In the months ahead I will be discussing the funding position within Europe and the United States," he said. "I am not making a decision now because of the continuing issues I have seen here."

Ethiopia is Africa's biggest recipient of British aid – spending this year totalled £130 million – and under Tony Blair, Mr Meles was hailed as the model of a progressive African leader.

Ethiopia wanted a long-term promise of British aid to bolster its negotiating position with international lending agencies and outside investors. But its internal repression has grown too harsh for its allies to ignore.

Since a disputed election in 2005, Mr Meles has become increasingly authoritarian.

Simply amazing isn't it? Increasingly authoritarian you say? How about you just noticed because people were actually massacred in front of ferenjis this time for a more accurate statement?

What the British minister is saying is that Her Majesty's Government believes that Meles is blocking aid to starving Ethiopians as a matter of policy. Meles in calling such inhuman behavior 'despicable' is clearly speaking about himself - and everyone knows it.

The Times said last month that

"The WFP has told donors that it blames Ethiopia’s 'delays in recognising the extent of need' for causing the rapid depletion of existing food stocks. But a Channel 4 News investigation tonight claims that the army has withheld food from villages in the Ogaden deliberately as part of a 'scorched earth' policy"

"This situation would be shameful in any other country," the report concludes. "The US Government cannot in good conscience allow the food operation to continue in its current manifestation."

Shameful in any other country but business as usual in Ethiopia. In The Fundamental Things Apply we wrote about the Meles Inc. engineered inflationary contribution to the continuing crisis in the Ethiopian economy.

Dagmawi, in characteristic fashion, absolutely nails the points down in his analysis and reading of IMF report that show that in addition to violent mass oppression that Meles pumped billions into the hands of supporters.

Dagmawi asks us to

(1) Ethiopia has a huge governmental bureaucracy compared to most other countries. These people need to be paid salaries every month. In addition, there is a shadow bureaucracy of tens of thousands of TPLF/EPRDF cadres stationed all over the country. These people need to be paid too (directly or indirectly the money comes from the government). Both these categories of bureacrats are unproductive (i.e. they do not grow food or manufacture goods). But they have money (provided by the government) to buy food and goods.

(2) According to the World Bank (2007) fifty-five percent of the economy is composed of public enterprises. Most of these are unproductive, uncompetitive, loss-making enterprises. But they need money to operate, and they get that money from the government. In addition to these public enterprises, there are inefficient, unproductive enterprises owned by the TPLF/EPRDF. These enterprises are also provided with money from the Commercial Bank of Ethiopia. Most of the loans they took in the past (over two billion birr) were never paid back. All that money is circulating in the economy and worsening the balance between available money and available goods.

On the basic points that contribute to starvation the ferenjis have basically given up. Nevermind that:
-Ethiopia has one of the most oppressive and corrupt governments on earth;
-there no rights to private property;
-even more of the economy is government controlled than in Mengistu's time;
-the ruling party / aristocracy control the anemic private sector , government monopolies and the apparatus that is supposed to tax and regulate all of them;
-foreign aid is siphoned off into elite foreign bank accounts as though it came with a round trip ticket;
-seventeen years of lies about bumper harvests and double digit economic growth were always the fantasies of fools:
-the whole ferenji relationsip with Meles Inc. is based upon low expectations and a preference for dealing with the all too typical "devil we know rather than democrat the natives plead for."

None of those things are even an issue. The stark reality is that ferenjis look at Meles and see exactly what Ethiopians from Badme to Moyale see. A murderous thug who is willing to hold power and enrich himself at any cost to Ethiopian lives.

It is clear that the Ethiopian economy won't grow beyond the bounds of emotional cash remittances from Ethiopians abroad who are allowed to earn wealth and foreign aid from the pity and contempt generated by Meles Inc. policies from societies organized in exactly the opposite manner as Ethiopia.

Ethiopians, under present government, face a future of 'poor nasty brutish and short' lives stretching forth endlessly with only a green card lottery promising profound change.

Does anyone out there doubt for a second that Meles Inc. will get every cent of British aid this year and next and that his personal portfolio will grow? Suffering and oppression are cash businesses. The ferenjis will pay up, Ethiopians will give of their blood, sweat and tears, and Meles will get richer.

Of course the ferenjis will pay up. After all Meles has tens of millions of hostages to threaten. Trotsky, one of Meles's ideological and practical mentors said that "where the state is the sole landlord - opposition means death by slow starvation."