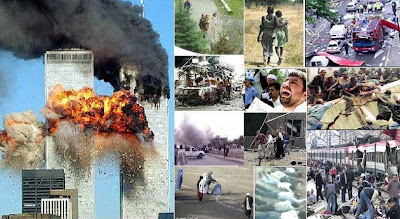 The Fourth World War is here. This time civilization faces determined enemies who want to bend Islam, one of the world's great religions, to their own private will in the service of yet another totalitarian evil. The first three world wars were fought against the Central Powers from 1914-18, totalitarian Fascism from 1935-45 and totalitarian Communism from 1945-91.

Each enemy in turn was at first engaged with policies based upon wishful thinking and frank appeasement that were nurtured by civilization's own self doubts, denial and fears. Peace only came when enough people had the final bitter realization that like it or not there was a war going on that was worth winning.

That realization came to most in the U.S. seven years ago today. Some countries have been fighting the war for years while a few are just noticing it. Many others in the U.S. and elsewhere remain unconvinced or simply assume they at least will remain untouched.

We don't use the words 'civilization' and 'world war' lightly.

Imagine a world made according to the dreams of Hezbollah / Hamas / the Taliban / Al Quaeda / Islamic Jihad / the Ayatollahs and their ilk. Permanent Black slavery, eternal female subjugation, a new Jewish Holocaust, the utter destruction of Hindu, Christian, Buddhist, unapproved Islamic, and secular culture, civilization, and all we know of the modern world are not matters of an overactive imagination but dead certainties.

All you have to do to realize this is to listen to what the bad guys say.

The bad guys, and they are bad guys, want your submission and your life one way or another. The submission of you and your descendants (should any be allowed to live) forever. They will keep trying until they win, die, or are convinced they have absolutely no chance of success or even of being left alone.

Osama's plan for 9/11 wasn't that different from that of Charlie Manson. Helter Skelter was the latter's name for what his cult's serial killings would set off. First, Blacks would be blamed for the killings and in their anger they would rise up and take over America. Unable to run it they would turn to him and his 'family' so he would be the ruler of America - and then the world.

Osama figured he and his boys had defeated the Soviets (never mind the debilitating absurdity of 70 years of Communism, Stinger missiles, etc.) and poked at the US with no response for years - and don't forget he was really really pissed off about the past thousand or so years of history. Like the Imperial Japanese Empire or the Soviet Union he imagined that the US would just fall apart if it was hit hard or intimidated.

Actually the US became the target because his brand of political Islam had become an absolute failure in every country. Most peoples and certainly all governments beside Mullah Omar's Afghan prison nation weren't having any of his nonsense long before 2001 besides lip service and propaganda to serve themselves. Osama figured the US was the easy target having been rejected everywhere he imagined himself having a natural constituency.

Osama was going to so impress the 'street' that governments would fall, empires crumble, and his new world emirate would just have to pick up the pieces at leisure. Things did not quite work out that way. Many like Kaiser, Tojo, Hitler, Stalin etc. before him looked at liberal democracies contemptuously through their own twisted visions and never imagined they could really resist.

None realized that sufficiently aroused or quietly determined that they could take on anyone and win. However, pretending there was nothing going on would have guaranteed defeat.

Pretending it is all a misunderstanding or someone else's problem or somebody else's fault won't work. Sensitivity won't work. Understanding won't work. Ignoring them won't work. Surrender won't work. They hate you because you exist outside of their circle of submission. It is that simple. They will kill you or at least hurt you whenever and wherever they can as long as you let them.

The plan is that your human will breaks long before your actual abilities do.

That is terror. When you hear that the terrorists will win 'because they love death more than we love life' you are hearing the death rattle of a dumb idea. Of course they will lose in the long run. The question is how much they will hurt everyone else before the end. Imagine Osama and his ilk, any given Ayatollah, or Charlie Manson with a nuclear weapon.

Have no doubt at all that they would use it.

There is an interesting story about the time Khrushchev took power. He was told about a large thermonuclear bomb wrapped in cobalt so powerful and with such lingering radioactive poison that it would render the earth uninhabitable. It would be used in the event that the Soviets were ever defeated.

Now before you keep reading please note that Khrushchev was no warm and fuzzy teddy bear of a guy however amusing or ridiculous he was banging his shoe on that desk at the U.N.

The man who presided over the Ukrainian famine, who was Stalin's faithful hound during the purges of the 1930's etc. was horrified. He ordered the bomb taken apart. Whatever rationality (far more likely than humanity) that made Nikita make that decision will definitely not be shared by whomever comes to posses a bomb in the name of a hijacked religion in the likely very near future.

Mutual assured destruction just would not work with Osama or Ahmadinejad. There will be a reckoning on these matters - there must be - and it will happen sooner than we think. World War IV has already begun and nukes like suicide bombs are a natural part of it.

Some don't like to call it that or even acknowledge it - but reality is no great respecter of feelings or wishes or fevered dreams of the way the world should be and not the way it is.

Liberal democracy and the very concept of human freedom did not just appear out of wishes or thin air. People fought and died, toiled and suffered so that billions today have rights and relative freedoms from want that were unimaginable a few generations ago. That reality is spreading of its own accord and that is what the bad guys hate and fear.

Even today liberal democracy, freedom, and the economic rewards attendant to them are made safe by willing men and women everywhere who stand guard. Everyone who has ever valued a free thought, free expression, or any vestige of a future they control themselves should have no doubt that it all just happened or that it will just stay that way.

Osama and Khamenei know they have no place in such a future - so they don't want you to have that future either. Yes, that means YOU.

Ask the mass litany of victims of this terror what it is they have been fighting for years. Ask the people of Afghanistan, India, Israel, Thailand, the Philippines, Iraq, etc. Some like the Spanish government may pretend it is not there and anyway a matter for Americans to deal with.

Many in the West have the definitely racist notion that original sin is their own and that no one can be as evil as themselves. This point of view is actually more contemptuous of an enemy and enrages an enemy more than anything else.

Many in the rest of the world get a vicarious thrill out of seeing the West, America in particular, attacked. Such people can be useful at times in shielding the actually very weak terrorists from the consequences of their actions.

Such people will always be dealt with eventually whether by Charlie Manson or Osama bin Laden. Without those willing to fight defending them how long does anyone think they would last?

There is a war on. It is the same war all over the world and it has to be won. Like it or not you are in it.

Events of the night of August 9, 1969 and the morning of September 11, 2001 occured a whole continent and more than thirty years apart. They were, however, the results of remarkably alike assumptions of human corruption and infectious psycopathic ego. Charles Manson and Osama bin Laden wanted and continue to want exactly the same thing - to take over the world - it is really that simple, that insane and that evil.