Bashir vs. The International Criminal Court 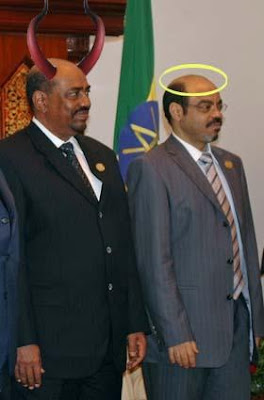 “Concern for justice should not trump concern for peace,”

How convenient. Meles Zenawi (dictator / owner of ethiopia, mass abuser of human rights, scavenger of war, c.e.o. of meles inc. intl., & all around profound intellectual) on Bashir’s diplomatic offensive against the International Criminal Court. Actually, he ponders his own fate. LA Times


The essay below was written by Paulos Milkias (PhD)*.

Darfur is not the only case of international intervention in an African human rights dilemma. During the last two decades, Africa had several crises that needed international attention. The conflicts in Somalia, Uganda, Ethiopia, Eritrea, Côte d'Ivoire, Sierra Leone, and Liberia devastated entire communities. Of particular concern to the international community was the widening conflict in the Democratic Republic of Congo (DRC) which spilled over into the neighboring countries of the Central African Republic, the Republic of Congo, Rwanda, Burundi, Uganda, Tanzania, and Zambia—several of which were already experiencing humanitarian emergencies of their own. Even after a shaky peace accord was signed in the DRC, humanitarian conditions did not improve significantly, and the International Criminal Court (ICC) had to deal with known human rights abusers.

While humanitarian emergencies continue to proliferate in Africa, a question with far-reaching implications arises: what is to be done regarding Darfur? Are there justifications for the Sudanese government's position that no international organization can interfere in its own internal affairs? And if intercession is contemplated, what constitutes a sufficiently just cause to warrant intervention? All these depend on several factors: the intentions of the interveners, whether interventions are a last resort, who and what might be a legitimate target of intervention, reasonable prospects for success, and proper authorization.

The issue of just cause requires that severe suffering warranting help has arisen. These include such threats to vital interests as indiscriminate killings, torture, rape, and displacement of people. These would count as significant threats to human dignity and normal life. When such activities are widespread, and the state either perpetrates the injustices or does nothing appropriate to end the suffering of people, it would be reasonable to suggest the just cause threshold has been attained. These were undoubtedly present in ICC's Darfur case.

Sudan has vehemently opposed what it considers intervention in its domestic affairs by the ICC. The Sudanese government has rejected the ICC's request that war crimes suspects Ahmad Harun and Ali Kushayb be arrested and handed over to them. They consider the action an intrusion into their national affairs and have dubbed the ICC "a tool for [imposing] the culture of superiority." But they could not stop the International Criminal Police Organization (INTERPOL) from publishing a notice for the arrest of Harun. Sudan's Justice Minister Ali al-Mardi said that any attempts to arrest Harun and Kushayb through INTERPOL would be treated as "kidnapping and international piracy."

This opposition to the ICC's adjudication represents both practical and fundamental hurdles. On one level, there is no possibility for an international tribunal to operate without a state's cooperation in turning over defendants and evidence and permitting investigation within its own territorial boundary. If the government of President Omar Hassan Ahmad al-Bashir shields its citizens from the ICC, the court would be hard pressed to carry out its prosecution.

On another level, criminal proceedings by international tribunals have rarely fulfilled victims' expectations of universal justice. The international criminal tribunals for Rwanda and Yugoslavia were both severely criticized as being too remote, too sluggish, and biased in their choice of defendants. The prosecutions were accused of sparing the most senior defendants from the local courts where they might be tried in accordance with local standards and within view of the local population that had witnessed the atrocities, and where, just like their subordinates, they could face the death penalty if convicted. This of course could not be expected in the Sudan, where the chain of command in the crime stretches up to President Bashir himself whom the ICC is now seeking to prosecute.

The International Commission on Intervention and State Sovereignty, after a through study of international law and conventions, determined that it may be appropriate for supranational bodies to intervene in what are normally considered the domestic affairs of a state for the purpose of protecting people who are at risk. The commission's report pinpointed principles on which its prominent jurists reached consensus and which it believes to be "politically achievable in the world as we know it today." The cardinal principles the commission considered legitimate were stated in the following words:

State sovereignty implies responsibility, and the primary responsibility for the protection of its people lies with the state itself. . . . However, where a population is suffering serious harm, as a result of internal war, insurgency, repression, or state failure, and the state in question is unwilling or unable to halt or avert it, the principle of nonintervention yields to the international responsibility to protect.

Regarding the issue of proper type of authorization for interventions, there is no better or more appropriate body than the United Nations Security Council that charged the ICC to take up the Darfur crisis. By its very design, the Security Council bears a primary obligation to deal with all requests for emergency authorizations and it has to do that within an appropriate time period, particularly when they entail urgent, large-scale crises like Darfur. There is clear tension between the goals of nations shielding themselves from outside interference and international goals of responding to victims who suffer in humanitarian crises; but when it comes to respecting sovereignty and respecting the welfare of individuals who are in distress, the matter should definitely be resolved in favor of protecting the vulnerable individuals who suffer in humanitarian crises.

*Paulos Milkias Ph.D. is, a former Canada Council Doctoral Fellow, is Professor of Humanities and Political Science at Marianopolis College/Concordia University in Montreal, Canada. Specializing in political science, he earned his MA and PhD from McGill University in Montreal and his BA from Haile Selassie University in Addis Ababa, Ethiopia. He is currently co-editor of North-East-African Studies and associate editor of the journals Horn of Africa and the International Journal of Ethiopian Development Studies.