Scavengers of the Horn 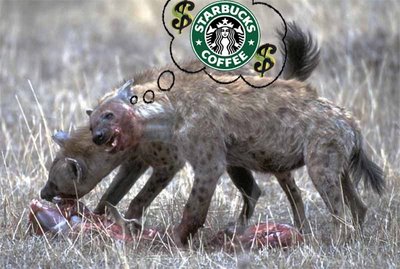 Just in case, dear readers, you hadn't heard, the hyena, scavenger and corporate symbol of Meles Inc., has its eye on new territory. (image) From AFP (via EthioMedia) we hear that

Oxfam on Wednesday pressed US coffee giant Starbucks to let Ethiopia trademark three coffee beans and end a dispute in which the company has been accused of heavy-handed tactics.

The charity made the call after Oxfam chief Jim Donald and Ethiopia's Prime Minister Meles Zenawi held talks in a bid to end the row, which has allegedly denied the impoverised Horn of Africa nation its rightful due.

But Starbucks won't budge. Corporations are often wrong, just as your average human is also often wrong. After all, corporations are made of people and across the world people have stakes in them whether they know it or not.

Next time your car starts or you find food at the market or you fly across the ocean in one piece or you read about new treatments for AIDS - don't give the government credit - rather good old fashioned corporations (with appropriate democratic government oversight of course) did it all for nothing but pure profit in relentless competition with eachother.

There is a certain brand of sophomoric wisdom that holds corporations wrong no matter what they do - it usually received with solemn nods and high fives. In effect, any corporate critic is assumed to be on the side of the angels no matter what reality is.

Let us see how one game played out. Continuing from AFP:

Ethiopia had applied to trademark its most famous coffee names, Sidamo, Harar and Yirgacheffe, enabling it to control their use and allow farmers to receive a greater share of the retail price.

But in mid-August, the US Patent and Trademark Office ruled in favour of a protest by the National Coffee Association, which represents US coffee roasters including Starbucks, against the trademark application.

According to the Economist (via EthioMedia) there is a storm in a coffee cup brewing:

Oxfam says Starbucks is depriving farmers in Ethiopia of $90m a year by opposing the Ethiopian government's efforts to trademark three types of local coffee bean.

At least 70,000 customers have contacted Starbucks to complain, prompting the firm to post leaflets in its shops defending its behaviour. It accuses Oxfam of "misleading the public" and says the campaign "needs to stop".

Now Oxfam is a reputable organization but we agree with Starbucks here. Oxfam is not speaking on behalf of Ethiopian peasants in this case but on behalf of the corporate interests of Meles Inc. The Economist goes on, with a remarkably clear grasp of the issues at hand to say that:

[The] suggestion that the Ethiopian government is being frustrated in its attempts to help coffee growers become more entrepreneurial is laughable. It is being advised by Arnold & Porter, a top law firm based in Washington, DC.

It ought perhaps to have asked its lawyers for help in creating a business-friendly legal system, with meaningful property rights, to give Ethiopians a better shot at escaping poverty through their own efforts.

Ethiopia ranked 97th in the World Bank's latest "ease of doing business" index and a dreadful 130th in Transparency International's corruption-perceptions index. Some suspect that its pursuit of trademarks is just a way for the government to boost its own income, with little or none of it being used to help coffee growers.

The Ethiopian Review also has 'the real story'.

Oxfam's stated goal is "to find lasting solutions to poverty, suffering and injustice." We would like to remind Oxfam that the main source of poverty, suffering and injustice in Ethiopia is not Starbucks. It is the brutal dictatorship of Meles Zenawi. Oxfam has yet to say any thing about the brutal treatment of poor farmers, and the people of Ethiopia, in general, by the ruling Marxist junta.

Oxfam, and others who are campaigning against Starbucks, need to explain what if the coffee giant removes these names from its shops, instead of paying the $80 million per year, which goes to Meles Zenawi's pocket? How would the poor farmers of Ethiopia benefit from that?

You see, dear readers, the Ethiopian government is a dictatorship for profit or, in other words a cabal of cannabalistic kleptocracts. There is no private ownership of land which means that the government owns all land. This also means that the effectively feudal aristocracy that runs the single party government owns every square inch of the country.

Planned indebtedness of peasants to government fertilizer monopolies control them and land (and every other kind of economic) insecurity directed by government whim are united under one of the most corrupt and brutal governments on earth - this situation of course guarantees eternal poverty. The ruling party openly owns corporations that are inseperable from government monopolies, phantoms of oversight and crooked licensing /import / export schemes.

The dictatorial / corporate interests in question are enforced by every harsh means at the disposal of an unelected and naturally unpopular national government - particularly by murderous private militias, armed forces, armies of spies, jailkeepers and secret police.

The banking system, auditing and enforcement agencies, the so-called parliament and courts, the slavish party owned press are also part of the same corrupt-by -design structure that occupies Ethiopia like an army of scavengers.

The extent to which the Ethiopian economy at every level is dominated by the tiniest and greediest elite in the country's history, is so marked that just like Idi Amin's Uganda, the Ethiopia of Meles Zenawi is effectively "one man's bank account." As one would expect, profits are exported and can be found in foreign banks and real estate in countries with property rights and freedom.

Ethiopia has recieved billions in aid, loan forgiveness and direct budget support totalling far into the tens of billions since 1991 but every contract and dollar and euro spent has to make it through an impossible obstacle course of corruption and party/government hands that sees little to no benefit to Ethiopians in general.

In another article the Economist (via EthioMedia) had this to say

Though he has alleviated poverty a tad and improved the country's infrastructure, Mr Zenawi has turned Ethiopia into a police state. Many of the opposition are in prison on trumped-up charges carrying the death penalty. Tens of thousands of young Ethiopians were sent to prison camps after last year's poll. A few still languish there; others have fled abroad. Several judges have defected, fearing for their safety.

The press has been crushed, foreign correspondents expelled and many journalists and editors put in jail. The government has hired foreign specialists to help it shut down dissident websites, tap telephones and track e-mails. Among foreign governments, China has become an ally.

Most of the above is right, except that tens of thousands are still in prison camps (far from ferenji eyes) and even more important Meles had nothing to do with any 'tad' level alleviation of poverty or improvement in infrastructure - if such actually exists.

Infrastructure is built in Ethiopia when foreign donors discover plans already made by Ethiopians dating back years or just as often as far back as the 1950s. They decide to build a road here on the map or an electric line over there. The money comes from ferenjis, they make the decisions and get things done and keep them running.

The Ethiopian government despite the presence of many talented and honest individuals is so manifestly built in the corrupt image of its rulers that it becomes a sponge for graft. Government / party corporations / monopolies or crony businesses get every contract, siphon off as much as possible - then ask for more and then maybe - just maybe, something will get built.

Given the nature of the foreign aid game, responsibility for any halfway good result becomes headlines and of course has to be shared with the government that is actually busy keeping its people poor. You see for dictators like Ethiopia's, there is profit in the poverty of millions and security in the chaos of purposeful policy.

Shooting and killing your way to the top of a nation and being begged to treat your own people decently means "never having to say you are sorry" when you can bring it all tumbling down and folks believe you are ruthless enough to do it.

So ... the whole Starbucks - Ethiopia affair boils down to a corporate shakedown of Meles Inc. against an honest corporate citizen. Does anyone out there really believe that a single Ethiopian peasant would have seen a cent of money from coffee any more than they see any results from billions in foreign aid?

Starbucks had offices of its own government to turn to for justice against the bloody politburo / corporate board ruling Ethiopia - and all that was at stake was money. Ethiopians have nowhere to turn because it is their own government that is their problem - and their lives are at stake.

What the regime tried to do to Starbucks is a very mild form of what the regime does to Ethiopians everyday - pursuit like prey, shakedowns, predation and scavenging. The only difference is that Meles can't have anybody at Starbucks arrested, tortured or shot.