"It's Not a Magic Solution"

It's not a magic solution. It's just a completely different way of doing business

Nothing new in this post that we haven't said before. Some things just bear repeating - or rather the tragi-comic absurdity of the Great Game must occasionally be re-heard to be believed. From the Washington Post:

Now the bank and the donors are re-engaging with Ethiopia but providing a much different form of assistance than before, on the theory that they can continue to aid the country's poor while refraining from bolstering the Meles regime. Instead of lending to the national government as it usually does, the bank will provide $215 million of its new aid to hundreds of local governments, mainly for basic services such as water, health and education.

"It's not a magic solution. It's just a completely different way of doing business," Ishac Diwan, the World Bank's country director for Ethiopia, said in an interview.

The organizational chart on the left is for one of the more famous fictional family businesses. The Don or Boss is at the top and appropriately slightly out of focus behind him is his consigliere (counsellor).

Below is the Underboss (sort of a senior capo) and below him the Capos. Each Capo commands a crew of many 'soldiers' (made men i.e. full 'family' members with permission to steal and kill at will) and 'button men' (assassins). 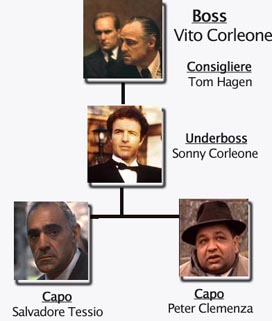 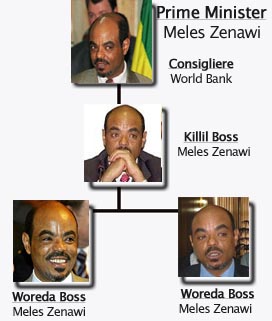 Along with less privileged criminal associates at the bottom of the pile, the lower ranks do most of the actual dirty work of organized crime. Basically, they make people offers that they can't refuse - certain violence and death are substitutes for more conventional sales techniques and along with greed and fear serve as the glue of the organization.

The purpose of the organization is to make money and keep power so that more money can be made ... and vice versa. There is vanishingly little than won't be done to achieve those objectives and a whole internal mythology and symbology of supposed honor, purpose and history has evolved to justify and attempt to sanctify heirarchies like the one above.

The organization chart on the right is that of the Ethiopian government. Every particular above applies here as well except the Corleones did not get a seat at the U.N. and the Corleone protection rackets did not involve the suffering and lives of millions of Ethiopians nor bringing down the whole Horn of Africa like a demented Samson.

There are options which we discuss in No More Appeasement. This post is put together from a piece of the post The World Is Yours IV - "An Offer They Can't Refuse" when 'bypassing' the regime was first considered by the British.

And no, Mr. Washington Post Staff Writer, the economy HAS NOT "grown at a healthy clip in the past two years, offering some hope for lifting Ethiopians from the ranks of the continent's poorest people" - but the economy is stagnant beyond Western aid and foreign remittances from societies where people are actually allowed to create wealth.

As always one must wonder if a story on Iraq or Egypt or Zimbabwe or any other place would be so value neutral (you know, values like human rights and corruption being bad and all) and without any measure of moral judgement made despite an effort to get in some of the facts.

At least Almaz Zewde, a professor of African Studies at Howard University is quoted in the article stating the simple truth.

The fact that they won't channel the money through the central government doesn't change anything ...

The central government is everywhere; the local officials are their appointees. ...

In terms of the World Bank's objectives of creating good government, and trying to assist the struggle for human rights and democracy, they are working against that."

No Mr. Country Director, it certainly is not a magic solution and again no, it's the same old way of doing business.

The World Bank and the governments that it represents know that the reason they can finance the Bank is that their countries did everything in the development and governance game exactly the opposite of the Ethiopian government's policies.

They also know that the only reason that Ethiopians aren't being offered as slaves on the international market for cash or intentionally starved to death for their general opposition is because the regime depends on donors who might frown on such open bad behavior.

But ... in the future who knows what the donors won't tolerate as 'the best those Africans can do for themselves anyway, and not the worst they can do to eachother, at least.' Ethiopians have already seen some seriously low standards here for their own government's and the world's behavior.

There is nothing anyone can add about the brutality or corruption of the regime that the financiers of despots at the World Bank don't already know.

Their handouts are just designed to pass a problem onto the next Western President or Prime Minister instead of the current ones. Well, it is a big problem for Ethiopians right now.

It is not like Ethiopians don't want to take care of themselves or their own problems by why does the world have to PAY to keep their problems in place?