The World Is Yours VII - Wise Guys 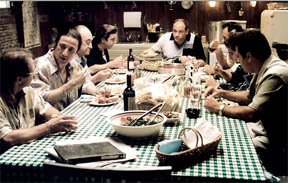 You're supposed to be earners, that's why you've got the top positions.

Tony Soprano Schoool of Graduate Management. From The Godfather - image.

With the kind permission of the author, we are serializing some selections from this remarkable article “The Great Purge and Ideological Paradox in Contemporary Ethiopian Politics” by Professor Paulos Milkias (copyright 2001). The author examines in detail the history of contemporary Ethiopia and of her ruling party. This is the second part of a section concerned with the economy of Revolutionary Democracy.

One point to remember always is the essentially corrupt worldview of tribal divide and rule cherished by the government. The TPLF and Meles Inc. serve the interests of the Tigrayan people just about as much as the EPRDF serves the interests of all Ethiopians. Keep in mind that despite the insidious efforts of the Politburo to associate its activities with the good name of Tigrayans it is clear that a very few permanent professional feudal revolutionaries rule for their own benefit - NOT that of Tigrayans in general. More on this in the post In Whose Name?.


In most cases, the TPLF companies function independently. In other cases, they carry out their businesses through joint ventures with private Ethiopian as well as foreign investors. Those that own companies as a joint venture with the TPLF have preferential treatment while others that are independent have an uphill fight in advancing their business ventures. Mr. Meles has this to say concerning the matter:

There are those who fear that government and party enterprises may use their power to patronize those that work with them and pulverize those that fail to cooperate with them. Coming mostly from comprador quarters, such views are indeed justified. In fact the compradors understand the mission of the enterprises better than some members of our party and it is due to this fact that they vehemently detest them.

Actually, many of the successful businessmen in Addis Ababa have financial connections with the TPLF. If we take EFFORT, we see that it owns 51% share in Addis Pharmaceutical Factory, and Star Pharmaceutical and Medical Supply. Most of the remaining shares are those of Mulugeta Guade Mengiste [an Amhara] who has risen like a rocket in the business circle in Addis Ababa within a span of a decade. Mulugeta is in control of Addis International Trading while at the same time being a major shareholder in the BANK of Abyssinia and NILE Insurance. Yemru Nega Denbel, proprietor of the Yebcimad Construction firm has a multi-million Birr investment with its Denbel Building in Addis Ababa. EFFORT that owns Guna has the single most important block of shares of UNITED Insurance. Gebreyes Begna, the owner of the large private distribution company Ethio-Amalgamated has also a large block of EFFORT shares in his business venture. EFFORT also controls Meskerem and Mesebi Companies with Italian investors to whom the TPLF has provided political patronage. Through aggressive and unfair competition, EFFORT is literally squeezing private businesses out of existence.

It is interesting that despite the restrictions of the law, EFFORT and its branch plants are in every dent of the Ethiopian economy. As a party owned conglomerate, EFFORT is divided into 5 sectors - each having its own share companies headed by senior officials and Cadres. The first area they control is Industry, which is directed by Abadi Zemo. This [industrial] branch has the group companies of Meseo Building Materials Construction, Sheba Tannery, Almeda Textile, Almeda Garment, Addis Pharmaceuticals and Mesfin Industrial Engineering. The second area of control is mining, which is directed by Tedros Hagos, and has under it, Meskerem Investment and Ezana Mining. The third area of control is Finance and Trade directed by Sebhat Nega. This branch owns Wegagen Bank, Africa Insurance and Guna Trading. The fourth branch of control is Construction and Transport directed by Arkebe Uqbay which has under it Addis Consultancy House, SUR Construction and Trans-Ethiopia. The fifth area of control is Agriculture directed by Tsegaye Taimyalew. This branch runs Hiwot Mechanisation, Tesfa Livestock and Rahwa Goat and Sheep Export.

The other three junior members of the umbrella organization the EPRDF, ANDM, OPDO and SEPDF have also common as well as their own party companies although on a much smaller scale. For example, ANDM has ENDEAVOUR, the OPDO has DINSHO and SEPDF has WENDO, all of which were created with the help of the TPLF.

Mr. Meles admits the TPLF has a much stronger muscle in this regard, but he denies that they indirectly also work for the good of Tigray. He comments:

One accusation that is aimed at [our ] party ventures is that they are created solely for the development of Tigray in opposition to the declared ideas of the EPRDF to develop all regions of Ethiopia. It is an undeniable fact that from the outset, the Tigray establishments started with a larger capital that they accumulated during the long armed struggle. Since the TPLF team had stronger and much better manpower; they were more successful in their business activities. That is why there is discrepancy in the capacities of the disparate party owned ventures.

A careful look shows, however, that EFFORT has direct control of the major businesses other EPRDF companies are engaged in. For example, as well as being in control of DEDEBIT Credit and Savings Institution which is a share company wholly Tigray owned and set up as a joint venture between the Government of Tigray and the Para-NGOs: REST, TWA, TFA. TYA, EFFORT is the towering single shareholder of EPRDF-controlled Wegagen Bank.

One disastrous result of the emergence of these semi-monopolies owned by the governing political parties is that they chocked out private businesses in almost every sector. Mr. Meles denies that when he says:

There is no need of raising the name-calling regarding the EPRDF's foundation enterprises. But one has to refute the false accusation that these enterprises have been used as instruments to muzzle in private entrepreneurs.

But Mr. Meles has commented in the Central Committee concerning these investors:

The political forces in Ethiopia ... that have co-existed with three governments are "compradors" and as such have no viable organization; nevertheless, they can contribute to the strengthening of “Bonapartism”. As the experiences of the last nine years have manifested, they are the ones that invite potential forces to a system of corruption.

Mr. Meles has suspicions that Ethiopia’s private investors encourage “Bonapartism” and corruption and are instruments of international capitalism and world imperialism. As a Marxist, therefore, he cautions about the danger and prescribes vigilance against them. He comments in this regard:

A paramount bastion of “Rotten Bonapartism” is comprador capitalism and its global network. A distinguishing characteristic of comprador capitalism is its nature to march along world imperialism and take control of government coffers and accumulate money through the process of systematic plunder. That is why they would be delighted to find a cooperative government to their illegal activities. By the same token, they would be highly disappointed if they do not. They would, if possible, try to control government coffers, or otherwise struggle to make the government in power a collaborating partner in the ongoing pillage.

A careful look proves that the private investors have been treated unfairly because the TPLF and other EPRDF owned corporation do not function by the rules of a fee enterprise system. As party owned companies, they enjoy many economic advantages the others do not have. They have the benefit of preferential access to government controlled credit facilities. They receive special treatment in operational and import/export licenses and custom clearances for their goods. They have preferential treatment over private enterprises with regard to government contracts. REST's transport services are transferred to TPLF companies through rigged governmental auctions. And above all, the TPLF regime puts pressure on corporations, business enterprises international donors, whether they are of private or government source to give preference to EPRDF companies.

The question that may be asked at this juncture is, are they really engaged in development projects or are they competing with private business where development is not the main motive? To answer this, if you take EFFORT"s transport, trade and construction companies, they enjoy almost a monopoly status in the country. For example, Guna monopolizes the wholesale and export trade with sesame and incense. Trans-Ethiopia is the only transport company that International donors can use to carry relief goods throughout Northern Ethiopia.

Mr. Meles has this to say about their present status and their future in the “Revolutionary Democracy” system he has charted for Ethiopia:

To those who have long-range vision, “Revolutionary Democracy” will assure that our party enterprises will freely compete with the private sector and use their revenues for the party's political aims.

The restricted documentation this author has consulted to do this part considers the EPRDF Business Empire as being, "by far, the largest concentration of economic power within Ethiopia and one of the largest business groups in Africa south of the Sahara and north of the Limpopo."

A word on some sources from the author:

Meles Zenawi, Gimgema Papers, 2001 Meles’ “Perspectives and “Bonapartism”,” and “Again on “Bonapartism”,” together with other shorter documents presented at the 2001 conference, are hereafter referred to in the footnotes as Meles Zenawi, Gimgema Papers, 2001. The translation of these Gimgema papers from Tigrigna to Amharic was rendered by Reporter Magazine.

The translation from Amharic to English is the author’s. This researcher pays tribute to the Reporter staff for the way they conducted themselves and particularly for their candid and fair reporting during the crisis. Both the Reporter and the Author have tried to be as faithful to the original as possible.

The author expresses gratitude to officials with Ethiopian interest at heart [they prefer to remain anonymous,] who supplied the special study documents on which the information in this section is based.