The World Is Yours VI - Our Thing 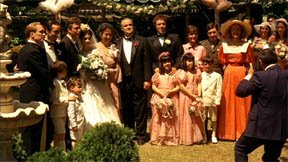 So the next day, my father went to see him; only this time with Luca Brasi. And within an hour, he signed a release, for a certified check for $1000 ... My father made him an offer he couldn't refuse ... Luca Brasi held a gun to his head and my father assured him that either his brains, or his signature, would be on the contract.

Michael Corleone's fiance meets the family and gets an MBA level tutorial on how thugs conduct business. From The Godfather, image.

With the kind permission of the author, we are serializing some selections from this remarkable article “The Great Purge and Ideological Paradox in Contemporary Ethiopian Politics” by Professor Paulos Milkias (copyright 2001). The author examines in detail the history of contemporary Ethiopia and of her ruling party. This section is concerned with the economy of Revolutionary Democracy.

One point to remember always is the essentially corrupt worldview of tribal divide and rule cherished by the government. The TPLF and Meles Inc. serve the interests of the Tigrayan people just about as much as the EPRDF serves the interests of all Ethiopians. Keep in mind that despite the insidious efforts of the Politburo to associate its activities with the good name of Tigrayans it is clear that a very few permanent professional feudal revolutionaries rule for their own benefit - NOT that of Tigrayans in general - whose potential estrangement from other Ethiopians they are dedicated to. More on this in the post In Whose Name?.

When on May 28, 1991, the Ethiopian Peoples Revolutionary Democratic Front [EPRDF] which was under the control of the Tigray People's Liberation Front, came to power, the government that was created was first provisional and then transitional. A Federal Republic replaced that in August 1995.

Mr. Meles' government claims that it emulates the practices of Western parties. It is clear that political parties in the West do not run their own private businesses. Yet, a large sector of the economoy in Ethiopian is controlled by the governing EPRDF.

The technique is to control the major economic life of the country through party NGO"s and foundations or individuals belonging to the EPRDF holding shares in companies that are indirectly controlled by the EPRDF. The managers and shareholders of these conglomerates are intertwined and the TPLF is the major holder and beneficiary in all this. Mr. Meles explains this:

At present, there are four foundation enterprises under the umbrella of the EPRDF. Some of these enterprises arose during the period of armed struggle. Their purpose was to finance the movement.

Despite official denials, economic advantages such as credit facilities and contracts are diverted to them. It is due to this fact that the EPRDF companies have so far been able to accumulate capital and have grown much faster than private enterprises since the change of policy in August, 1991.

Ethiopian economists who are familiar with the current state of affairs are of the opinion that if the trend continues and the EPRDF persists in controlling the Ethiopian state by frustrating the possibility of other parties coming to power, all the lucrative sectors of production such as trade, services and transport will go under the hegemony of the EPRDF.

The asset of EFFORT is definitely augmented by foreign donor capital. According to a TPLF veteran and one of the first leaders of the TPLF as early as 1978, the leadership had, against his opposition, allocated only 5% of the U.S.$100,000,000 relief aid to combat drought and Famine in Tigray, the rest going to the TPLF organization. Their revenues came from NGO contributions aimed at feeding the starving peasant masses of Tigray. This is not denied by the PM:

Many [TPLF enterprises] accumulated extensive capital from diverse sources including relief aid given by NGO's and foreign governments to feed famine victims. The funds were slated for buying arms for the TPLF's guerrilla organization with over 100,000 fighters and ultimately to be invested in its enterprises. Whereas the base of the capital of these enterprises is this, they have also since increased their revenue through investment in development projects.

The other sources of TPLF companies before the TPLF came to power in Ethiopia are tax collection from the areas they controlled and from contributions by party members and sympathizers in the name of developing and running Tigray as a potential independent republic; enforced taxation in the form of donations from individuals including the Tigray members of the army usually at public meetings; spoils of war obtained from the Derg government; treasury heist including the appropriation of cash deposits in banks, public institutions, development projects and military institutions after taking over a district or town or by carrying out carefully planned raid; keeping income from exchange transaction of REST with NGO's or governments that are not reported to the donors; obtaining income through fiddling with the internal purchase program operated by REST with international subsidies which includes deceptively selling grain already held by the TPLF to REST with its own members posing in front of the representatives of the international donors as civilian grain wholesalers; sale in Sudan of surplus food aid in the form of grain stocks by falsifying the number of persons in TPLF controlled areas that are in need of food aid; generating income by running TPLF-owned garages in the Sudan; earning income from many different types of TPLF businesses in Sudan, in Tigray and in other countries; appropriating refunds paid by international donors for costs of internal relief aid transport; making income from rural credit scheme which was set up with funds from International donors; raising revenue by handling the credit scheme for fertiliser.

At first the major front of the TPLF’s conglomerate was Relief Society of Tigray [REST] which, to solicit support from donor NGO"s, was officially treated as NGO independent of the party but was in reality the TPLF’s major money making organ and was run by a Central Committee member. By manipulating figures, [for example highly inflating the number of the population living in an area,] and transferring money to party coffers and by controlling a fleet of trucks donated to transport food to draught and famine stricken regions, REST became extremely powerful.

That the TPLF still continues to collect money from many of the above sources is undeniable. However, because it now militarily controls the entire Ethiopia, it is in a position to use state power to gain even more money from additional untapped sources. Thus, since coming to power in 1991, the TPLF made substantial amounts of direct transfers of funds from government accounts to its own in payment for services it claimed for TPLF-institutions.

Also, when it entered central and southern Ethiopia for the first time after May 28, 1991, it engaged in appropriating cash deposits it found in public institutions. It took possession of customs levied at EPRDF-manned checkpoints as reimbursement for non-specified EPRDF-expenditure. A careful look shows that on the whole, the TPLF saved its own organization's cash by financing its own expenditures out of public funds.

REST was helpful to the TPLF in more ways than one. It enabled it use surplus food to feed its army; it helped it to control the peasants that formed its grassroots supplier of manpower and information; it helped it to gain legitimacy among the population; it enabled it to use food as a weapon of rewarding supporters and penalizing those who refused to cooperate.

In general, it was one factor that enabled it to survive as a guerrilla force and to ultimately triumph over Derg forces. After the TPLF took over power in Ethiopia, REST provided the base of the capital of EFFORT. In 1989, the Tigray Development Association, just like its predecessor, REST, was presented as an NGO. Legally, it has been created as being independent of the state but is in reality it an auxiliary organ of the TPLF.

The TDA was launched with the support of TPLF members at home and abroad. Its aim was to bring about rapid rehabilitation and development to Tigray.

REST owned a considerable amount of cash at the end of the war whereas the financial assets of TDA were still quite small. However, within the favourable context created by the take-over of power in Ethiopia by the TPLF-controlled EPRDF both Para-NGOs received large infusions of cash from various sources. In the last decade, the two organizations increased their capital through TPLF backed fund-raising campaigns in the case of TDA and funding by Governmental aid Organizations and NGO"s in the case of REST.

Several organizations that work as fronts for the above two foundations run restaurants in Mekele and other places. Dedebit Credit and Savings Institution was created as branch plants particularly with funds from REST that is now the major shareholder.

MEGA Communication, SUR Construction and GUNA Trading are the earliest among such front companies belonging to and run by the TPLF party. Offshoots of these also appear among which are AFRICA Insurance and ADDIS Engineering Consultancy. GUNA itself took over the major shares of UNITED Insurance with its General Manager becoming a member of its the Board of Directors.

In addition, SELAM Busline and SEGEN Construction, were established the exclusive shareholder of the company being TDA. REST also took over the majority of shares of DEDEBIT Credit and Savings Institution SC in 1997. The leading branches of REST and TDA, namely, Tigray Women’s" Association [TWA,] directed by a high profile TPLF official. Senior Cadres lead both and the government of Tigray has become minority shareholders of Debebit Credit.

In 1995 the “Tekal Egri Metkal Tegaru” [TEMT] [English: Endowment Fund for the Rehabilitation of Tigray (EFFORT) was set up as a foundation of non-governmental public charity. In reality, however, EFFORT is totally controlled by the TPLF party more than even REST and TAND because among its initial board of directors were seven TPLF heavyweights.

A law prohibiting political parties from owning businesses was passed in 1994. Before its passage, the assets of the TPLF and the other three members of the EPRDF were transferred to new NGO-style companies [such as EFFORT, ENDEAVOUR, DINSHO AND WENDO] to skirt the law. Nevertheless, the parties continue to control and run them if only in different guise. EFFORT was the biggest party conglomerate created to skirt that law. Senior TPLF officials who are also on its Board of Directors became major shareholders of this new party conglomerate. Its functions are describes as:
a) keeping in trust all the economic resources of the TPLF that was in existence before 1991;
b) employing TPLF property for generating income for the families of those who died fighting during the guerrilla struggle; and; and
c) promoting the industrialisation of Tigray by investing in the production of goods.

Continues next time with notes on sources.