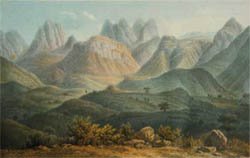 A mountain pass in the Adwa region
image

The 110th anniversary of the Battle of Adwa, March 3, 2006, was commemorated by millions in Ethiopia and 700,000 in the diaspora; symposiums were held at various universities in the US and Canada. In the book ...

... Nine scholars analyze the unique Ethiopian victory at Adwa, pondering the factors that brought success, the putative missed opportunities for securing the future integrity of the Ethiopian territory, and the lessons to be learned.

Rising above their regional rivalries and local concerns, all facets of this multi-ethnic society pulled together to defeat the Italian invaders who were armed with vastly more sophisticated technology and had the support of all of Europe.

For the victors it was decisive; for the vanquished, catastrophic. The Italian colonialist soldiers were crushed. Their casualty figure was 70%; all their artillery pieces were captured, one out of four of their generals was taken prisoner and two of the remaining as well as almost half of their staff officers were killed on the battlefield.

The event and its implications have much to say about Ethiopia’s subsequent development, the secession of Eritrea, and relations with external powers. It also reveals much about the machinations of global powers and the dangers they pose to weaker nations, and most specifically international influence in Africa.

The Ethiopian victory at the Battle of Adwa has remained a very important event in the shared recollection of the entire African people. It is the only secular episode in the whole history of Africa that has been celebrated for more than a century with unabated popular enthusiasm.

A phenomenon such as Adwa is a complex nexus of various historical processes with wide ranging but as yet not fully explored meanings. The contributors to this collection show that Adwa not only reflects its time but transcends it, and that the aspirations and meanings that flow from it have been a powerful constitutive force in the rise and evolution of modern Africa. Indeed, it is an event that awakened the hope for emancipation and the struggle against colonialism and racism among Africans in the colonies and in the Diaspora.

The Editors and Contributors

Richard Pankhurst, Ph.D. has published 36 books and more than 400 scholarly articles. His seminal works, The Economic History of Ethiopia, Cambridge University Press, 1976, and The Ethiopians: a History, Oxford University Press, 2001, are classics in the field.

Zewde Gabra-Selassie, Dejazmach, D.Phil. served as Governor and Mayor of the capital city of Addis Ababa, Minister of Public Works, and in other leadership positions during the reign of Emperor Haile Selassie of Ethiopia. He is also a distinguished African historian and is the author of many works including Yohannes IV - Political Biography, Oxford University Press – 1975; and Eritrea–Ethiopia, In the context of the Red Sea and Africa, Washington D.C, Smithsonian Institute, 1976.

Negussay Ayele Ph.D. a former Ethiopian Ambassador to Scandinavia, is Professor of Political Science and International Relations. He teaches for the Bunche Center for African-American Studies and for the Honors Collegium at the University of California in Los Angeles.

Harold Marcus Ph.D. was Distinguished Professor of History at Michigan State University. He was the founding editor of the refereed journal Northeast African Studies; he is perhaps best known for his biographies of Emperors Menelik II and Haile Selassie I, and his textbook History of Ethiopia [Oxford University Press].

Maimire Mennasemay, Ph.D. teaches in the humanities/philosophy department of Dawson College, Montreal, Canada and is a fellow of the Center for Developing-Area Studies (CDAS) of McGill University.

Mesfin Araya Ph.D.is Associate Professor of African Studies at York College/ City University of New York, where he is Head of African-American Studies. He has produced numerous scholarly works on Ethiopia and Eritrea, from a political science perspective; his next book analyzes Eritrean nationalism.

Get the Book online from B&N.com or Amazon.com