Sympathy for the Prime Minister 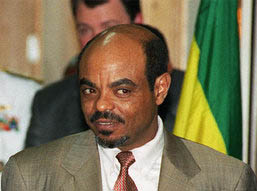 Please allow me to introduce myself
I’m a man of wealth and taste
I’ve been around for a long, long year
Stole many a man’s soul and faith


From the L.A. Times, a revelation for the ages: Africa's 'New Generation' Likened to Old Leaders once lauded by the West are accused of adopting the autocratic ways of predecessors. Amid absurdities about foreign investment and 'free elections' here is the money quote

The current leaders blame what they call the overbearing policies of international donors for many of their woes. In an interview, Ethiopia's Meles contended that his only fault was refusing to ride the "roller coaster" of Western opinion. "I have no regrets," he said.

How characteristic of recent Ethiopian governance is that? Not much different than when Mengistu's Communist policies starved Ethiopians and he blamed the imperialist powers is it?

Having chosen the path of eternal destitution and begging rather than any other standard of economic and social development that could enfranchise Ethiopians, the Prime Minister playfully snaps at the hand that keeps him in power and that feeds the people he impoverishes and oppresses.

Beyond the internal and external deadly bounds of a Marxist- Leninist Liberation Front named for its first victims that was locked in a death match with a Marxist-Leninist Military Dictatorship to see who the true heir of Marx and Lenin was - the rise to power and security of this regime has been based on honey tongued promises to Westerners to be whatever they wanted it to be at any given moment.

They in turn pretended to believe because they expected no different from or for Ethiopians than bibilical poverty and dictatorship.

With Blair and the left it was about sober post-liberal progressivism with a shared nostalgia for the good old days when radicalism was cool.All this while being an 'African we can talk to' despite some rather unpleasant habits as a despot.

With Bush and the right it was about realpolitik 'keeping the lid' on Horn of Africa instability while knowing very well that the regime was manipulating those fears to be appreciated as an 'African who may treat his people like sh*t but who sure as hell plays geopolitical ball'.

With international bureacrats it is about the very best cocktail party post-modern faux economic intellectualism with the same silly failed theories onanistically and ritualistically re-exhumed in the presence of an 'African who really listens to us and gives some of our theories' another chance on his captive subjects.

It wasn't the body count of the 'election' that upset the West as much as the fact that it was done where the world would somehow hear about it. Pressured to treat his people decently for a change by the West, or at least to spill a little less blood in public - the Prime Minister has been totally defiant. What did anyone ever expect anyway?

Tens of thousands are in prison camps, thousands are dead and those who operated in a false democratic space supposedly guaranteed by the West are 'on trial' for their lives for the high crimes of treason, genocide and for all we know jaywalking. In Ethiopia, if the Prime Minister says that up is down or that jaywalking demands a death sentence then - the party, the government, the parliament, the courts, the media, the military, the secret police and by definition all Ethiopians agree.

Everyone knows to play along with the game but the West changed the rules so Meles is upset. Who can blame him? As far as Meles was concerned no one could ever have really thought he was any kind of democrat anyway. The whole 'election' was a show to justify increased aid to Western taxpayers. So when Westerners started actually asking that he act like a democrat he felt betrayed and justifiably so.

Looking back on a career of canny tricks and bloodshed to subdue first the TPLF then Tigray then Ethiopia while bamboozling the whole world he must wonder if he was really that convincing as a 'Renaissance African Leader' after all and that such stage success comes with a price.

One imprisoned opposition leader told of a meeting with a Western diplomat before the 'election' where he asked what Western contingency plans where for an opposition victory. The diplomat was stunned into silence upon realizing that Berhanu Nega wasn't just going through the motions so that Meles Inc. could receive more Euros, Dollars and Yen.

The only people who took it all seriously where 70 million Ethiopians who voted out the government wherever observers where present and who somehow also supported the government when no observers where present. Everywhere there reward was loss of property, freedom and whatever hope they had that providence was about to give Ethiopians a break for a change.

Take the recent negotiations with Eritrea where there has been a 'breakthrough' which can only mean that Meles is finally going to go along with the results of the arbitration that he rejected then accepted then rejected then accepted then rejected over the past six years. In What are the Real Reasons Why Meles Decided to Accept the Border Ruling? from last year Dagmawi pretty much has the final word on this subject all the way from the issue of real loyalties to serotonin levels.

We would add that Ethiopia is in these negotiations now simply to make Westerners happy and possibly Eritrea's government too. Ethiopia's government never adopted a policy of making Ethiopians happy to stay in power so it has sought out other constituencies.

Billions of dollars and tens of thousands of lives were lost to gain a victory in a war where Ethiopia was attacked. A bitterly won victory was inexplicably surrendered to arbitration against all human experience and common sense. The surrender then came for the sake of looking good to ferenjis and the games being played now come for the same reason.

Meles knows that he and his permanent revolutionary aristocracy are loathed in every region among every ethnic group. Easing up on the opposition or on Ethiopia's who want to inhale a breath of free air will put Meles Inc. out of business so he will NEVER take his foot off of the collective Ethiopian neck.

Tomorrow if a deal is struck with Eritrea's government the whole government information machine will viciously attack anyone who ever had a less than generous thought about the Eritrean government before, during and after the war. In fact the whole war will be re-written off as a sneak attack by disloyal Tigrayan, neftegna Amhara and tribalist Oromo with Western aid against all that is true and good.

Love is hate, peace is war etc. - you've all heard of Newspeak before. Westerners who clearly care more for Ethiopia's people than Meles does have to be given something else to think about and they really seem to love Melesian Newspeak. Accusations of terrror against the totally non violent opposition serve that purpose as do rumors of war with Eritrea and rumors of peace with Eritrea.

Without even a pretense of analysis or the barest historical memory the international press just laps it all up and spits it back out. When things really get ugly the occasional reporter and official may be very mildly doubting or slightly upset at times - but it remains to be seen to what end.

It is no roller coaster that Western opinion has forced Meles on but rather a perverse carnival house of mirrors right out of a Stephen King movie. The Prime Minister rushes around blocking reflections of bodies while trying to convince his rich constituents in the West that they really don't see blood everywhere and that even if they do it would all be much worse without him.

All the while he wonders why they even bother to look or to act surprised when he hasn't changed at all.

Whatever critics of Meles may say of the West - without their even fitful concern with the fate of Ethiopians Meles Inc. would revive the East African slave routes of the past tomorrow to make a buck and stay in power. Of course the Prime Minister has no regrets.

The alpha and omega of his politburo / party / government / business empire is eternal power and wealth ... one day, thousands of lives and millions of suffering serfs at a time ... as long as the foreign money keeps rolling in and there are Ethiopians alive to squeeze a centime from.

Pleased to meet you
Hope you guess my name, oh yeah
Ah, what’s puzzling you
Is the nature of my game