First off we should say that we like U2's music. Well, both U-2's in fact even though the other had no music. 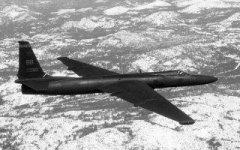 The Cold War U-2 was the very high altitude spy plane, still in use 50 years later, that Francis Gary Powers was flying when he was shot down over the USSR while the U2 band took its name from said airplane in a stunning fit of cool irony and deep relevant meaning for all. 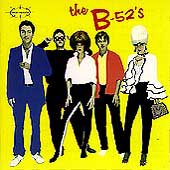 Kind of like the B-52 strategic bomber of Cold War nuclear alert and Vietnam fame, which is also flying 50 years later, gave its name to the B-52s in yet another stunning fit of cool irony and deep relevant meaning for all. 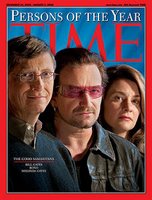 Thus it is follows naturally that Bono is the epitome of cool right? Just check out his trademark (rose tinted!?) shades if you doubt us in this Time cover for 2005's Persons of the Year. Bono has been reborn, it only seems like it is 50 years later at times, as the International Cool Ambassador for Human Goodness.

He continues to record and tour with U2 though. Back in the day there was one U2 album in particular, the one with "Where the Streets Have No Name", that became part of the soundtrack of at least one of our lives for a while there. So saying critical stuff about Bono does not come easy to us as doing the same for Bob Geldoff (seriously we've never even heard a single Boomtown Rats song!), yet, alas it must be done for the good of us all.

SPIEGEL: Bono, six months ago you and Bob Geldof pleaded for a debt cancellation for countries like Ethiopia. You did that successfully. But in the meantime, President Meles Zenawi's government rigged the elections, sent thousands of people into prisons and accused journalists and opposition leaders of treason. What went wrong?

Bono: I am gutted about what happened there. I know Meles Zenawi. I have sat with him on more than a few occasions. I know his story. He fought a guerilla war against Mengistu for 17 years. He is a regarded macro-economist, believe it or not.

SPIEGEL: Does that give him the right to put people into prison for publishing their opinion?

Bono: No, no. Of course not. I just want to say that he is a person who deeply cares about the poor in Ethiopia and has done some great things. But he's bipolar. On the other side we see that he's still a military man, who will not give up power, who is closing down civil society and is putting the opposition in prison, behind bars. This is shocking and apalling.

SPIEGEL: Are you surprised by the recent development?

Bono: Meles has just turned sour in the last years. For a while he was doing mostly what was right. The decisions that were made in good faith in the past, you can't hold them ransom for the present.

SPIEGEL: This government has never been democratic. The elections last summer were supposed to be the first democratic ones in the history of the country.

Bono: Aid flows are being withdrawn now. And the movement I belong to is part of the reason why the British government has pulled out of Ethiopia. We have to have a very simple standard of doing business, which is: If you are not tackling corruption, if you are not allowing civil society to do their job, we are not giving you any money. Outside of famine, and outside of those kinds of catastrophes, which need money pumped in no matter who's in charge. We are not marching the streets to redecorate presidential palaces for anyone.

As a general rule we like it when folks agree with us so we don't have too many problems with parts of this particular interview including lines like "we are not marching the streets to redecorate presidential palaces for anyone" EXCEPT that the glaring bits of nonsense sprinkled around spoil the whole thing.

The parts we are referring to are in bold above and indicate that Bono really seems to have no problem with Meles or with tyranny in general beyond the current 2005-2006 disappointment with fake elections resulting in violent revenge against a whole nation of hostages, the arrest of tens of thousands, God knows how many killings and on and on.

Before this, everything with Meles was just fine according to Bono. The main reasons that Bono's country is rich, that others with billions of people are getting richer and Ethiopia is getting poor every year is based upon simple things like popular accountability, the rule of law, private property rights and a government even nominally representative of the people it rules.

The 'regarded macro-economist' of Bono's fevered imagination was doing everything wrong in terms of the normal socio-economic development of every halfway successful human society for 14 years before the recent 'unpleasantness'. Bono should read The Birth of Plenty and Do the Right Thing for some much needed clarity on these issues.

Why didn't Bono notice the previous fake elections, mass violations of human rights and the vast web of structural corruption represented by a ruling party / government that owned all of the land and controlled the economy through a web of government monopolies and party / crony owned with the iron hand enforcers of a despotic state along for the ride?

Sorry Bono, me lad, this just did not all just happen in 'recent years'. And you know that very well.

Anyone with the most cursory appreciation of history and current events (and of reality for that matter) whose eyes were not forever covered with rose tinted shades should have known that a country getting billions in aid every year that still managed to get poorer and poorer and produce less and less food was not likely to be a pleasant place for the natives or anyone else in the near or long term.

What we can conclude is that Bono, who like Geldoff (remember readers, the scourge of our own Spice Girls) is probably a really decent guy but should also really serve as a poster boy for why the most blinding success in one field should not translate to any assumed expertise in another. A whole lot of people seem to assume otherwise.

Back when Audrey Hepburn was a UN Ambassador for Hunger or something like that the whole international caring celebrity thing was just fine because it was about drawing popular attention to a subject. Now, when celebrities expect to make policy and are listened to against all human experience and evidence in support of what are frankly bad guys, the time has come to tune out the world of cool caring celebrity.

What really matters in the end is the little guy - be he peasant farmer or worker or student or whatever. They are the very definition of human progress, who when given a break in a fair system, that has worked before for others like him, makes all of his own decisions.

He and the businessmen and the trader and the investors and the kulaks and those who actually do things and build things (and who never ever never study political science or economics) are the ones who one small step at a time transform national destitution to plenty in the short span of a generation or two - given a chance mind you.

They are the heroes and the ones who matter. Later for the celebrities we say.

Actually, given that Jeffrey Sachs, the big shot economist, probably still thinks (or at least still says) that Meles is the Greatest Man of All Time - the issue is really that many experts and those who 'deeply feel' the suffering of others and just 'want to make a difference' are most often entirely the wrong people to let loose amongst regular folk who only want for a shot at liberal democracy, property rights, the rule of law and good old fashioned capitalism to do very well for themselves indeed.

Bono knows very well that Meles is not 'bipolar'. Meles is indeed quite sane and utterly cognizant of everything he does. It is just that Meles and Bono don't inhabit the same moral universe even as they share the same earth. Admitting something like that is very hard to do for most people who have spent time with and been convinced by those that ultimately disappoint in such a manner.

Maybe, just maybe when Meles seemed to do 'great things' and to 'deeply care for the poor' while doing everything to hurt the poor and prolong his own rule - it was all about saying to Bono exactly what Bono wanted to hear since his blessing meant more money flowed into the purposely failing Ethiopian state to prop it up without the consent of Ethiopians.

Bono, Jeff Sachs, Tony Blair, and a bevy of international academics, officials and bureaucrats instinctively defend Meles & Co. while pretending they never saw or don't see any problems and make up fanciful excuses or look for cheap psychoanalysis to explain the fact that they were all simply conned by someone who made a living as a despot based on the practiced ability to be what any particular ferenji most wanted an African leader to finally be at long last.

What all the usual suspects are all defending is their own judgement and prestige in the end - acting bewildered about Meles's nature and even defending him are just sideshows. If they admit they should have known all along what every bit of evidence said about Meles and Ethiopia's Revolutionary Democracy - then they are faced with questions about their judgement and the billions they have already spent and want to spend on their holy missions to be super cool humanitarians in what are ultimately get rich quick schemes that have never worked.

Sorry Bono, if you want to help people, advocate that they have exactly the rights and opportunities that made the British rich and the Thai no longer poor. None of that can be found in one man of anyone's ideological fantasies - actually those always turn into nightmares.

Development and human progress are about doing what works. There is no third way or cool alternative or hyped new (or rewarmed) theories that can better that bit of common sense.It has served billions quite well and bad government with eager foreign help has denied it to Ethiopians.

Thinking that it is all about money and magical personalities means that Bono 'Still Hasn't Found What He's Looking For' and never will.