The World Is Yours III - The Commission 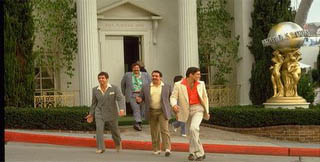 Tony Montana and his gang leave Montana Real Estate Inc. (an entirely independent enterprise connected in no way to Tony's 'other' business interests - only a revanchist, genocidal Eritrean agent would say different) in Scarface

With the kind permission of the author, we are serializing over a number of posts, Chapter 16: The Economy of "Revolutionary Democracy" from Dr. Theodore Vestal's remarkable book Ethiopia: A Post-Cold War African State.

One point to remember always is the essentially corrupt worldview of tribal opportunism and divide and rule held by the government. The TPLF nor Meles Inc. speaks for or serves the interests of the Tigrayan people despite the insidious efforts of the Politburo to associate its activities with the good name of Tigrayans. More on this in the post In Whose Name?

The Economy of "Revolutionary Democracy"

Since coming to power in 1991, the EPRDF has been committed to a market economy for the country. Most of the legislation in force during the Derg regime restricting a market economy and private business has been abolished. Although a substantial number of public enterprises are still owned and run by the government, many of these eventually will be privatized. State ownership was to be limited to certain strategic sectors including civil aviation, the railway, energy, mining, the chemical industry, telecommunications, insurance, and banking. Changes in the global economy, however, forced the EPRDF leaders to modify their plans and privatize parts of some of these sectors.

In 1994 the EPRDF announced a Five Year Development Program with the goals of improving the infrastructure and the climate for investments with assistance from the International Monetary Fund and World Bank. The program focused specifically on projects in health, education, agriculture, roads, and mining.

[Sounds good so far? The above paragraphs are essentially a loose statement of intention from Meles Inc. - further below is reality. Also - the whole concept of Five Year Plans is silly - economies work when good policies are in place in general.

To think that an entire economy and its growth can be micro-managed years into the future is an example of faith in totalitarian control that has always failed everywhere it is attempted. Indeed, the whole concept of Many Year Plans is from the defunct Soviet Union - we all know how well that economy did.

Despite $1.5 billion in annual aid (true) and claims of double digit growth every year and billions in foreign investments annually (both false) Ethiopians have been getting poorer every year.

Aside from a veneer of a free market to please donors little has changed from Mengistu except that the identical party / government owns the economy rather than the government alone. Both systems grant absolute land ownership to the government - another recipe for disaster with a benefit for some of absolute control over tens of millions of lives.

One must wonder how well Mengistu would have done with that much aid. The Haile Selassie government, which received a tiny fraction of the EPRDF aid levels, did not get $1.5 billion over the entire thirty years through 1974 and performed far better economically.]

As part of the strategy for attaining the Front's economic goals, the EPRDF nuevo conversos of capitalism secretly established a substantial number of large "private" companies in the names of party cadres. The firms, operating in Ethiopia and abroad, have a total capital of hundreds of millions of dollars. How did the Front, an armed movement with a narrow social base in a devastated area of a poor country, accumulate such capital in a relatively short time?

The massive capitalization for such ambitious undertakings began with donations and contributions by exiled members and supporters of the TPLF, but more importantly, it gained impetus from illicit sources. Former TPLF officials have testified to shady fiscal dealings by the party to provide income for the organization. In the 1980s, such nefarious schemes as the sale of relief food donated by aid agencies via Sudan for the people of Tigray helped fill the party coffers.

The Relief Society of Tigray (REST) was used as the fulcrum for bilking well-meaning NGO representatives who bought and distributed the same grain over and over again in areas controlled by the TPLF. In addition to relief assistance, donor agencies gave the TPLF medicine, agricultural tools and heavy machinery, road construction equipment, and transport vehicles and spare parts--all supposedly for the rehabilitation of Tigrayan refugees in the Sudan or farmers in drought-affected areas. Instead, those donations were sold to Sudanese buyers to finance the TPLF's war activities and to invest in income-producing businesses, such as printing, vehicle repair, and commercial farming in the Sudan.

During the civil war, TPLF fighters raided and looted Derg-held towns, robbed banks, pillaged hospitals, and ambushed Red Cross and other relief agency convoys carrying food and medical supplies. The plunder from these forays was supplemented by war booty abandoned by the Derg in its final months. Millions of dollars in tax revenues also were paid by people living in the areas controlled by the Front. In sum, the TPLF had accumulated wealth as well as military power before the final overthrow of the Mengistu regime.

Since the TPLF expanded into the EPRDF and assumed power and control of public finances in 1991, millions of dollars have been transferred from the government treasury to the party. In one instance, former Prime Minister Tamrat Layne was involved in a scheme in which the EPRDF sold medicine to the Ministry of Health and then took money from the budgets of public hospitals to "reimburse" the Front for medicines the party had distributed in various regions during the civil war.

[Tamrat fell afoul of the Politburo and was charged with corruption and was likely guilty too. That what he was doing was what the whole party enterprise was set up to do by intention is clear. Therefore in Ethiopia corruption is normal but the criminilization of corruption is political.]

Further, the government's fiscal policies have favored state enterprises and companies allied with the Front. Tax breaks are extended to party-approved businesses, and using its power to control the banks of the country, the Front has extended credit at very low rates or given direct start-up capital to its affiliated companies.

At war's end, the EPRDF took over a number of economic institutions and government-owned companies that the party has used for its own ends. Cash generated by these enterprises has been used as start-up money for party firms. Public property, such as construction equipment, machinery, and vehicles, that fell into EPRDF hands was sold to foreign buyers or converted into fixed assets for companies set up by the Front.

The EPRDF's vast network of "free" enterprises have been established in the names of individuals, who coincidentally are party members. In virtually every sector of the economy, nuevo conversos, former revolutionary politicians, have transmorgified into shareholders and managers of million dollar "private" businesses. In the process, these "crony capitalists," high ranking members of the Front, such as Sebhet Nega and Siyie Abraha,

[who himself was a victim of charges of corruption for what was basic political disagreement within the TPLF Politburo over policy towards Eritrea and some other more internal TPLF issues. Under the guise of reform and transparency in government (Ethiopia is now considered one of the most corrupt nations on Earth), this is a frequent weapon used against political foes. See this article, “Disabling a Political Rival Under the Cover of Fighting Corruption in Ethiopia” from Deki-Alula. ]

among others, have become millionaires while providing the party with income. To staff these businesses, the party again has turned to its own. EPRDF cadres and members, many lacking in requisite formal education and experience, have been hired as well-paid administrators and foremen.