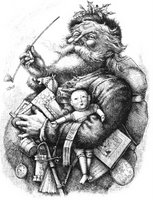 Merry Christmas, Happy New Year and A Joyous Holiday Season of every variety to all.

Looking back and looking forward there are many things we can say but if you have spent any time here you know what we must say ... that above all ... don't believe the hype - like Dracula the hype may take many forms, some quite handsome, glib and pleasing, but inside invariably lurks the ends and means of a vampire state feeding off of millions in a parasitic death grip. Think critically about every word that comes from the Ethiopian regime.

The regime has continued Mengtu's works of destruction eagerly and even underperformed him in significant ways. Ethiopia is today one of the least free societies on the planet and the very poorest nation on earth - a permanent beggar nation under Meles Inc rule that is forever tottering between a state of engineered collapse and dreams of massive aid as a permanent ward of international pity.

With tens of billions of Euros and Dollars given with no accountability at all in exchange for occasional lies about stability, democracy and a free market Mengistu could easily have been one of the African Rennaissance Leaders for the 90s and the new millenium too.

This government has simply made an accomadation with the imperialist camp dreaded by both Mengistu and Meles that eluded the Dergue. The massive aid scheme that has made taking care of Ethiopians who aren't allowed to take care of themselves a matter of Western responsibility was on the road that Mengistu had already begun before his replacement by those who won the contest to see who the real communists where.

All of this as a matter of government policy that exchanges such mass misery for the assurance of power for a few united by power alone and seperated from all other Ethiopians only by ruthlessness. All Ethiopians are hostages to the brutality of the class of permanent revolutionary nobles astride a pyramid of horrors and the mercy of foreigners who are the only constituency of government.

Hobbes himself would have considered his pessimistic description of 'poor nasty brutish and short' inadequate to descibe the life of 70 millions today. Billions over centuries in accelerating numbers worldwide have now have escaped or are busy escaping that barbaric fate imposed by tyrants through the tried and true methods of liberal democracy, the rule of law and capitalism.

All that Ethiopians need to thrive is already between their ears - in the human mind. A free life free from want is deserved by Ethiopians just like the rest of their species. A government that forever seeks tribal, religious and regional divisions, that finds only self serving lies in history and trades in lies as though they were diamonds doesn't even deserve to rule in hell.

Ethiopians only need a chance that billions elsewhere have been given and that the bloody lessons of the 20th century taught all men. Providence certainly owes Ethiopians a break sometime very soon and in the resistance to this government we see a non-violent variant of the spirit that kept Ethiopians always moving on and their culture thriving for some 3,000 years now.

There are two appropriate sayings at this point - the one about nothing being more powerful than an idea whose time has come and the other about what happens to a dream deferred.

Well, it is time now - all of the blood, sweat and tears of countless generations past needs to find purpose in examples of what has actually improved human life worldwide instead of the sense of national shame and somehow deserved misery that justifies the politburo's rule as though the ashattir (trickery) of the present is the best Ethiopians can ever aspire to.

The sum of the Big Tribal Lie, the Big Democracy Lie and the Big Economic Lie at the root of current Ethiopian government and all the other myriad lies and distortions that govern the simplest exchange of information is the enduring Big Lie of all dictatorship whether it is ‘Fascism of the Left‘ in the past three decades of Ethiopian government or ‘Socialism of the Right‘ as it existed in Mussolini's Italy

If you tell a lie big enough and keep repeating it, people will eventually come to believe it. The lie can be maintained only for such time as the State can shield the people from the political, economic and/or military consequences of the lie. It thus becomes vitally important for the State to use all of its powers to repress dissent, for the truth is the mortal enemy of the lie, and thus by extension, the truth is the greatest enemy of the State.

If there is a government announcement that the Earth is a sphere that revolves around the sun you should immediately assume all astronomy since Galileo and Copernicus was dead wrong and that the earth is indeed totally flat and that the earth rests on the back of a turtle at the center of the universe.

Don't just accept what ethiopundit says either - even though we are almost always right and invariably on the side of the angels ... make common sense, historical memory and morality make sense for you.

Common Sense is what people decide when they are free to choose and where refugees and money actually go when they are let loose.

Historical Memory showed long ago that every society on earth that has been free and prosperous has had as its bedrock of liberation from tyranny and misery an unshakable foundation in the right of all to own land.

Morality tells us that it is simply wrong for anyone to own every square meter of land in a country, to own and profit from an entire national economy and every possible sphere of business while controlling every voice.

Ethiopians are not what this government demands that they be so that they will live with its boot on their neck forever. They can never be that. Actually, it is not even clear if this government has a concept of forever beyond just whatever lies and crimes will keep them in power from one day to the next.

Ethiopians are simply better than their government - all 70 million of them.

There will be no posting here until January, probably past Ethiopian Christmas time or so ... except for maybe something about the movies and videos above. Read the older posts and visit the links on the sidebar.

There is an article about Ethio-blogging at the BBC from the reporter / author of Meskel Square. The sidebar also has a partial list of Ethio-blogs which are ever increasing in numbers. The Ethiopian government also seems to be coming out with a few blogs of its own to accompany total control of all media in Ethiopia as well as the expensive army of PR people, lawyers and lobbyists in the US so that the politburo's case can be presented in all forums from a variety of points of view.

These links below are all great.