Too Spicy for Some 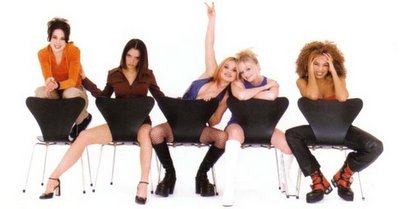 In the post Geldof vs. Girl Power we accused Bob Gledof of making a 'cruel and capricious' decision in preventing the Spice Girls from re-uniting for the Live 8 concert. It seems that we may owe him an apology ... maybe ...

Mel B is the lone holdout to a proposed Spice Girls reunion, says Live 8 organizer Bob Geldof. He further reported that she just did not want to revisit "something she did in the past."

Also known by the nickname Scary Spice and her full name Melanie Brown, the singer is having "difficulty" agreeing to join her erstwhile bandmates at the July 2 show in London, Geldof revealed on a British chat show Monday.
[...]
Asked about the possibility of the Spice Girls reuniting without Scary Spice, Geldof was adamant that it must be the original lineup. "No, it's got to be all or nothing," he said.

The other Spice Girls were reportedly devastated by Scary's decision. Melanie C., Sporty Spice said "I would love to be part of Live 8. I'm so sad I won't be there - or the other girls who really wanted to. Only four of us could make it" which lends further credence to Geldof's version of events.


too spicy for some?

Frankly, this does not reassure us that Geldof tried hard enough to convince Mel B. to re-join the group once more or that he did not actively work against the reunion behind the scenes. It also raises some very difficult questions about his possible role in the breakup of the group years ago when Geldof's own star was fading.

Could it be that the former Boomtown Rat was jealous of the attention that the Spice Girls commanded on the international stage? According to one observer, the Spice Girls are 'Exactly the Reason Why Bin Laden Hates the West.' Hanging out with Bono, assorted dictators, various Hollywood types and Jeff Sachs for the better part of two decades has never gotten Geldof that kind of notice among the geopolitical players of our times.

Sure, Geldoff was knighted by the Queen, but the Spice Girls went as far as to pinch Prince Charles on the bottom - in Buckingham Palace no less. Clearly, the girls in their day were far more comfortable in the corridors of power and dominated the very air around them without the need for masses of third world extras. The campaign against the unity of the Spice Girls bore fruit for Geldof in 2000 at the dawn of a new millenium. Is it possible that Geldof thought the world wasn't big enough for him and the girls?

Were they on to him and his plans? In the only feature film the girls were allowed to make, Spice World, the girls displayed an uncanny ability to get themselves into and out of some hair raising adventures. It is likely that they shared a similiar ability to figure out mysteries but because of Geldof, a sequel was never made. One devastating point against Geldof is that, Simon Fuller who got the girls started out in music is also the originator of American Idol a show that has featured rock AND pop music ... and he is also British. 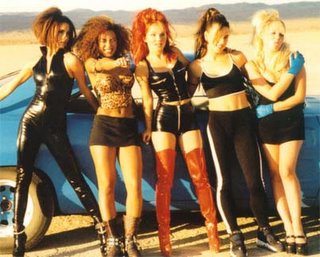 Amazingly, PM Tony Blair is also British and for that matter so is British MP George Galloway. Tony Blair is known to be best friends forever with Ethiopian Dictator Meles Zenawi. Galloway is Marxist-Leninist and Ethiopia's ruling ideology is a variant of Bolshevist-Maoism. It is apparent that given the easy almost untraceable modern flow of information using - the internet, phones, faxes and even telex- not to mention old fashioned letters and human couriers hypnotically implanted with memories they don't even know that they have - that they all had ample opportunity to coordinate action against the Spice Girls and cause their breakup.

Consider this, the British Henry VIII broke with the Vatican in 1534 while the first Live Aid Concert was in 1985 - exactly 451 years later! The numbers 4+5+1 added together equal 10 - not only the number of Commandments but also the count at one time of the number of members of the European Economic Community, now the EU.

When the first Spice Girl, Geri aka Ginger Spice, left the group she went to work for another disreputable international organization - the UN. Coincidence? We think not. Ginger had been seduced away to the dark side.

We have no doubt that Haliburton, the Trilateral Commission, the Democratic Leadership Council, Bill Gates, big oil, the Bush White House and the big pharmaceuticals are involved along with the KGB (that's right), MI-5 & -6, Courtney Love, the CIA, the DGSE and Suge Knight.

Actually the deaths of Tupac and Biggie Smalls are far to close temporally to the break up of the Spice Girls to be ignored. Was 'East Coast vs West Coast' actually the start of Geldof's plan to use violence and intimidation to take over music and the world at large?

The truth is out there. Some horrible purpose has brought these diverse actors together despite their differences and has given them a common purpose. All to serve the nefarious purposes of Sir Bob Geldof.

We demand that the 'gentleman' account for his actions against the good ladies in question. We do not find his reasons for their absence from Live 8 to be credible and given his associations over many years he could conceivably be the linchpin of a long standing plot against them and against humanity in general.

The music video where they threw metal boomerangs and raced around in the desert breaking up vases were surely symbolic of their struggle to crush the budding tentacles of the Geldofian hydra of world domination ... and tragically, how those earnest efforts would rebound against our heroes in the real world.

Even the video that has them tearing down curtains (certainly symbols of the Geldofian reign of terror that silences real talent in the music industry) is no longer enough to keep the dream alive. The lyrics 'if you wanna be my lover, you gotta get with my friends' obviously refers to the need for an alliance by all people of good will against the Geldof machine.

The world needs the Spice Girls back in the difficult days ahead. The likes of Sir Bob can not keep the lid of tyranny over the magnificent humanity that they represent. Just look at them above ... how can any decent person disagree? Especially Mel B., aka Berbere Spice, is she wonderful or what?

If you are still reading here is a historical note about the poses and the chairs in the picture above.

The naughty girl pictured is none other than Christine Keeler and the first photo from the 1963 series was among the most iconic images of the 1960s. Christine was at the center of the Profumo Affair which in brief involved

The downfall of a cabinet minister, and ultimately the resignation of the British Prime Minister Harold Macmillan.

Even more briefly, Christine, who lived by the kindness of strangers, was 'involved' with a Cabinet Minister and KGB spy at the same time. Secrets weren't the issue as much as the British staple of basic Tory sex scandal. Actually, a fairly decent movie by that name, Scandal, was made in 1989.

The chair was the work of

Arne Jacobsen(1902-1971) was one of Denmark's most influential 20th century architects and designers. Both his buildings and products, like his Swan and Egg Chairs, combine modernist ideals with a Nordic love of naturalism.

Jacobsen is best known for the

Model 3107 chair of 1955, known also as the "Number 7 Chair" which has sold over 5 million copies. The Number 7 chair is perhaps best known for being the prop used to hide Christine Keeler's nakedness in Lewis Morley's iconic portrait of 1963.

Morley just happened to use a chair that he had in the studio, which turns out to have been a copy of Jacobsen's design. Since then, Number 7 chairs have been used for many similar portraits imitating the pose.

Decades past in Addis when Mosvold's was THE (only?) department store in the country there was an absolute dominance of Scandinavian styles in furniture that makes his work seem familiar over time. 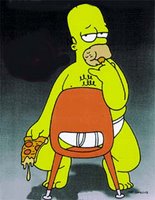 Spice Girls Links: Plenty of pictures at lonestarspice.com (image source) and a scholarly treatment at Wikepedia.