Return of the Living Hype 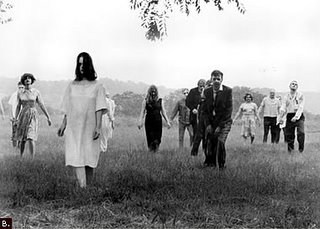 The Hype stalks the earth like the living dead and we couldn't just let these textbook examples of it get by:

Ethiopian authorities have released 2,417 people who were detained last week during opposition protests.

Police said they were being released because they were not directly connected with the violence, in which more than 40 people died.

We only have the word of a murderous dictatorship that these people were released. No one knows how many were arrested to begin with. No one really knows how many were even killed. This is a classic Soviet style maskirovka effort just like the deception operations of an intelligence service.

A false layer of pseudo-rational good will is being painted over a bloody massacre and crackdown against innocents. So much we hear from this government is this form of 'mengist be'ashattir' (government by trickery).

For example, Mengistu would freely admit killing people for being counter-revolutionaries then demand a price be paid for each bullet hole in a love one's body before their families could take them home. This government makes the families of victims sign documents saying the opposition killed their loved ones or it claims not to know anything about them to begin with.

Or, as in this case an appeal to reason and law & order is the manipulated response desired. In the end Ethiopians are still being killed for being counter-revolutionaries except this time it is for being against Revolutionary Democracy instead of Scientific Socialism.

From the Ethiopian government's Walta, this headline "Ethiopia's economy to grow 7-8 percent this year, says MoFED (Ministry of Finance and Economic Development)." This is a very modest claim in relative claims. Usually the economy grows at double digits according to the government and it has been doing so for most of the past fifteen or so years since 'liberation'.

If any of this is true then why has Ethiopia gone from being one of the poorest countries on earth to the very poorest? Why does per capita GNP shrink year after year even as the economy supposedly grows faster than the population could possibly increase? Similiarly bumper crops are routinely claimed at the same time appeals are being made for unprecedented crop failures.

Here is another gem from the same source, "Residents in Gambella applaud re-election of PM." Remember, Gambela is the same place about which we wrote this post, Blood, Oil and Ethnic Rule in Gambella where pressure from the American Ambassador via the Anuak community in the US and various human rights organizations prevented further government massacres there.

They also expressed hope that, based on the long term experiences, the firm stand and commitment of Meles would enable him to do his level best in extricating the nation out of the quagmire of poverty.

The residents further said the decision by the parliament to allow the existing provisional administration of Addis Ababa to continue its role is appropriate since the party that is expected to take over the administration has failed to undertake the transfer of power.

They also expressed disappointment over CUD's disregard to its constituency.

the re-election of Meles Zenawi as Prime Minister of the country is delighting and an indication that the democratic process is taking root and ensures the future prospect of nations and nationalities.

He also said the decision taken by the House of Peoples’ Representatives against the elected MPs who boycotted the inaugural parliamentary assembly was appropriate and timely.

Umod further said the unwillingness on the part of the wining party to form a government in the Addis Ababa administration is not only anti-democratic but also criminal.

The Anuak Justice Council begs to differ, noting of the administrator that

He earned his way to power by becoming “a true citizen of the government” as he was dubbed by the Head of the Federal Government Security, Alemaw Alamiru, who congratulated him after a rigged election on Thursday, September 29, 2005. Mr. Alamiru was one of Olom’s co-partners in planning the Anuak genocide of December 13, 2003 when 424 intellectual Anuak leaders were massacred within three days.

As one of the primary masterminds and executors of the genocide, Omot Obang Olom, is himself an Anuak, making him the most despised of all Anuak. He was the one who provided the list of hundreds of names of those educated Anuak who might speak out against the corrupt, brutal practices of the Ethiopian government of Prime Minister Meles Zenawi.

Who do you believe dear reader? Bureaucratic 'reporting' that reads like an old album folks had to buy at gunpoint like the multi-platinum hit "When Brezhnev Was King: The Greatest Hits of Tass, Pravda and Isvestia" that climbed straight to the Soviet Empire's Billboard Charts in 1982 ... or ... basic common human sense and morality.

Meskel Square touches on this whole business observing that

Somewhere in some far-flung corner of the developing world there must be an international school for the training of journalists employed by state-controlled newspapers.

It is the archetypal state-owned intro, drummed into the head of every government hack.

Examples of this type are legion. The whole concept of real trade unions is non-existent in Ethiopia beyond the harsh measure dealt out to those who try to form them and the absurdity of the fake ones run by the ruling party. However, we are expected to buuy into this page from another section of the government talking points, that the

Confederation of Ethiopian Trade Unions (CETU) has expressed support to the new peace initiative Ethiopia has proposed to resolve the dispute with Eritrea. Implementation of the peace proposal would be vital to enhance the sense of mission of workers in the country and to expand investment, it said.

The support came during a relevant meeting held here on Monday bringing together executive members of the nine industrial federations. CETU President Amare Alemayehu on the occasion said realization of the peace proposal would be vital for the workers to lead stable lives, so that they can contribute meaningfully to national economic development.

Amare said CETU has been discussing the issue with the workers at various times.
The peace proposal would be significant to draw increased foreign direct investment, he said, adding that it is the only option to resolve the disputepeacefully. The participants said CETU should forge consultations with counterpart organizations in Eritrea towards the realization of the peace proposal.

You couldn't make this stuff up if you tried and one is forced by this type of nonsense into an almost impossible decision of whether to laugh or cry because this is how Ethiopia is actually being run. For an bonus laugh (or cry) read this statement in support of Revolutionary Democracy a few years back when the term was still being used out loud in English, "Principles of revolutionary democracy said vital to speed up development (corrected version)"

Upholding the principles of revolutionary democracy could be significant in ensuring the independence of the judiciary, strengthening unity and tackling threats posed to the well being of the nation, cadres and members of the Harari national league said.

At the conclusion of a five day discussion held under the title, "the question of democracy in Ethiopia" the participants said on Monday that revolutionary democracy was the only development strategy that could fit for the objective reality in the country.

In the absence of accumulated capital, advanced technology and skilled manpower it would be difficult to adopt the principles of liberal democracy, they said.

The principles of revolutionary democracy could effectively address the basic needs of the Ethiopian people by stumping out the bane of corruption, nepotism and abuse of power, the members said.

They said revolutionary democracy could also encourage the direct participation of the people in the nation building process.

Upholding the principles of equality based on diversity and establishing harmonious relationships among the peoples of Ethiopia were the corner stones to speed up economic development, the members indicated.

They also vowed to fight narrow nationalism, chauvinism and corruption, which they described as the major threat to the whole of the country.

Imagine what the uncorrected version was like! From the above it is clear that Revolutionary Democracy can also take stubborn grass stains out of clothes, fix global warming, create endless non-polluting energy free for all and program your VCR.

Think critically about every word that comes from the Ethiopian government. If there is an official announcement that the Earth is a sphere that revolves around the sun you should immediately assume all astronomy since Galileo and Copernicus was dead wrong and that the earth is indeed totally flat.

we'll be back in a week or so ... the cadres have us running really scared, you see ... why not check out the links on the sidebar and the recent posts / archives ... and above all DON'T BELIEVE THE HYPE! ... this time we really won't be back for a week or so.