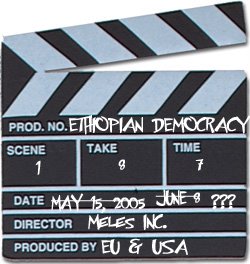 We never took this last or any other Ethiopian election or the referendum on the constitution seriously. We figured it was all a mass propaganda effort to simulate consent just like every totalitarian state has always done - with the extra added bonus of increased Western aid for putting on a good show. Everything we knew about the regime led us to believe that there was absolutely no chance that Meles Incorporated could ever give up its absolute power.

While we were certainly right on every point above, we were very pleasantly surprised, no astounded is the right word, that the Ethiopian people and the opposition took the elections seriously. The tenacity with which they have stuck by their just demands that actual democracy be practiced has been brave, admirable and at times heartbreaking.

This despite the fact that no one was meant to take any of the election ritual seriously.

Similiarly, all concerned knew from day one that the whole government ruling ideology of Revolutionary Democracy was nonsense, that Meles Inc. was in fact a totalitarian party with corrupt state and crony businesses grafted onto it, that the absence of any sound economic policies and private ownership of land would guarantee eternal destitution. But ... the West had one good thing in their minds ... finally, an African they could talk to!

As we said, Meles Inc. was not about to give up a fraction of power or wealth - like the fable of the frog and the scorpion that was just a matter of the regime's immutable nature.

A scorpion and a frog meet on the bank of a stream and the scorpion asks the frog to carry him across on its back. The frog asks, "How do I know you won't sting me?" The scorpion says, "Because if I do, I will die too."

The frog is satisfied, and they set out, but in midstream, the scorpion stings the frog. The frog feels the onset of paralysis and starts to sink, knowing they both will drown, but has just enough time to gasp "Why?"

Replies the scorpion: "Its my nature..."

Seriously folks, the regime is all about rather poorly disguised Marx - Lenin - Mao true believers orphaned and abandoned in (to them) a nightmare world where the Capitalists won the Cold War. Of course they aren't democratic, of course they treat people badly and of course they are corrupt - to do all those bad things to innocents defines the very essence of their ideological nature.

The Western aid donors who are the real constituency of the government never expected the regime to give up any of its power either- they knew exactly what they were dealing with all along. Both just wanted to make it through the ritual neatly so that the status quo could be neatly affirmed with everyone feeling refreshed.

The Ethiopian people got in the way of these plans. The regime reacted viciously, to no one's surprise, but the Western aid donors were stuck with having to carry the whole business through as though it had been serious all along. They knew the opposition won, they knew the opposition leaders would be dead if it wasn't for their regular contact with donor embassies, but were stuck because, we repeat, they knew the government would not leave or share power - ever.

Pressure was put on the opposition to just go along with vague promises of support and that next time would be better if they just obeyed the constitution and joined parliament and did not cause trouble or bad headlines for anyone. The opposition did not play along because it knew next time would be far worse. Now as a rising tide of blood and tears has become increasingly impossible to ignore, there are vague mutterings from the aid donors about cutting aid if unenforced demands to be democratic and play nicely are not met.

The problem for the regime and its only real constituency, the Western aid donors, is that if the demands are met at all sincerely - that Meles Inc. will necessarily lose power because the party / business / governemt empire rules by the gun and can not compete in an democratic environment where Ethiopians can choose. The regime certainly feels betrayed by the West because they thought it was understood that they should rule forever.

The West feels betrayed by the regime, not just for treating Ethiopians poorly but mainly because it did a really really really poor job of staging a fake election. If only an underestimation of how much the dictatorship was loathed had not permitted some democratic opening beyond appearance, then neither the government nor the aid donors would be in their present predicament.

The regime is basically saying to the donors, "look we'll kill these Ethiopians and ten thousand others just like 'em if you keep filling their heads with this democracy nonsense and having them expect things above their position." The West is responding "we know, we know ... can't you just do it somewhere where we can't see, the opposition won't listen to us either, what?! no! we can't kill them for you!?"

It is easy to blame the regime for treating its own people so badly but frankly harder to blame the West. After all they are busy looking after their own people's interests and just trying to find an easy way all around. The shame of all of it is that for Ethiopia's government the fate of Ethiopians is a more distant priority than it is to the Western donors. After all, in their minds, how are they supposed to deal with a government that has to be threatened and begged to treat its own people decently?

Ethiopians were supposed to be the extras in the election movie. The Western aid donors would produce, Meles Inc. would direct and star while millions of extras were supposed to follow their cues, say their lines and leave the stage just so. You know, just milling about in the background providing color and pleasant noise to the scenes as the world recorded the progress of democracy for posterity.

The problem is that the extras have decided to rewrite the script before the director got to yell "cut!"