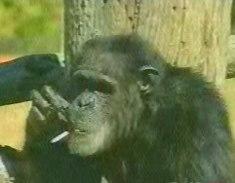 A female chimpanzee in a Chinese zoo has managed to kick the habit after smoking for 16 years, Xinhua news agency reported.

After a second spouse died in 1997 and her daughter was moved to another zoo, the broken-hearted chimp's health reportedly started deteriorating.

Zoo keepers say they are giving her mouth-watering food and playing pop music to improve her mood.

"In the first few days, she squealed for cigarettes every now and then," Xinhua reported one zookeeper at the safari park in the Shaanxi province, north-west China, as saying.

"But as her life became more colourful, she gradually forgot about them altogether."

Her new, busy lifestyle includes walking after breakfast, exercising in the evening and being served "fried dishes and dumplings at every meal" on top of bananas, rice and milk, he said.

Now and then, she can also borrow her human friend's walkman to listen to music.

It is not clear how Ai Ai developed her addiction, and whether she was first given cigarettes from the same guardians who have helped her quit.

Who else was letting the chimp have cigarettes and presumably lighting them up for her? The BBC would probably blame Tony Blair or George Bush if you gave them half a chance. It is exactly nonsense like this that is ruining the BBC and the MSM in general. They are too concerned with being cute to think about the story.

First, of all they quote Xinhua as though it is an actual news source. Remember Xinhua is one of the most reliable sources of quotes for the Ethipian government when it is looking for praise from abroad on the occasion of stealing an election for example.

Second, the chimp did not 'kick the habit' voluntarily because someone finally read her the Surgeon General's Report from 1965 nor because the gorilla from the next cage over that she use to party with was diagnosed with a tumor.

No, the same bunch of jerks who got her hooked on smoking to begin with decided to unilaterally take her smokes away one day. You must believe that she was not happy. Those 'squeals' for cigarettes were probably anything but cute.

They were probably the howls of an addict purposefully manufactured by the authorities of a zoo - who was screaming in protest at the removal from her life of the one thing that made her happy - she is on display in a mad scientist's / sadist's zoo - what else could she have?

Seriously now, her health went down (nobody really explains why) after suffering a broken heart times two in 1997 and they let her keep puffing away or they got her started about that time.

The BBC alludes to the dubious fact that she started then as a cure for sadness but more likely she got out of hand and they used smoking as a way to manage her behavior. They probably started to begin with thinking it would be funny ... and the BBC reporter thinks he is so smart for figuring that the 'guardians' are the issue ... ya think?.

Be certain dear reader that pop music (let us hope for his sake they are playing Faye Wong at least) and "fried dishes and dumplings at every meal" (where the hell is PETA when a primate needs them - are the authorities trying to clog up her arteries so she won't ever talk about the zoo regime?) is not what silenced her - it was despair.

Imagine how the rest of the place is run - maybe they drip blood into the shark tank for laughs. Just think about it. She is captive, she lives in a zoo managed by people who thought it was cute to see her smoking in the first place and there are humans walking by at all hours staring at her and making silly faces.

If the crowds are anything like those in the USA, exactly every minute like clockwork, some allegedly higher primate does a chimp impression. You know, the really insulting kind where they purse their lips, scratch under their arms and say 'oooh oooh' while hopping around.

And this is all in China so you know half of the visitors are smoking like chimneys.

What torture ... let the chimp smoke already ... or let her have a boy chimp in there with her for a change. Here is yet another BBC story "Frustrated chimp takes up smoking" about yet another lady chimp in a Chinese zoo who started smoking, this one allegedly out of sexual frustration.

What is going on in Chinese zoos anyway? Are the pandas getting khat instead of bamboo? Shouldn't there be UN inspectors over there right now?

The author of the above was ethiopundit's lone smoker until finally quitting cigarettes exactly nine months, twelve days and seven hours ago.