straight from the rubbish bin of history ...
hugo and fidel's most excellent revolutionary adventure ...
would three be a crowd? 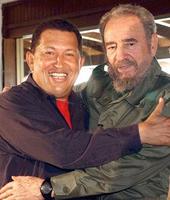 Take a look at this Pravda piece "Cuba and Venezuela to unit[e] Latin American states to confront the growing imperial aggression of the USA."

Yes, it really was written in 2005, Ethiopia is not the only country stuck in a time warp of dated radicalism. The article quotes Caudillo Chavez on the subject of democracy:

"People have asked me how I can support Fidel if he's a dictator ... But Cuba doesn't have a dictatorship - it's a revolutionary democracy."

That is certainly welcome news to Cubans who were under the impression that forty six years of Castro's one man rule (one of the richest men on planet earth) was against their will. This also comes as a relief for 70 million Ethiopians who had mistakenly come to think that seventeen years of Scientific Socialism and fourteen years of Revolutionary Democracy meant only that any given Politburo Knows Best for everyone forever.

AllAfrica reports (via Ethioindex) that some anonymous diplomats are like totally loyal to Ethiopian revolutionary democracy in its struggle against imperialists (donor countries). The problem is that unless those secret diplomats come from countries with systems that actually manage to create wealth - it does not matter a bit.

Chavez is using Venezuela's billions from high oil prices to finance revolutionary movements and parties all over Central and South America. Rather than go into fortress mode after being attacked by colonial viceroys over the 'election' perhaps the Ethiopian government can call upon Chavez for help. After all, what is a few billion dollars here and there between fellow revolutionary democrats?


One more Cuban - Ethiopian link ... although less direct but certainly curious. The whole Ethiopian system of Kebeles (neighborhood revolutionary committees) to control and indoctrinate the populace has its roots in similiar structures from 1917 Russia to 1949 China to 1959 Cuba.

In Cuba they are called Committees to Defend the Revolution. The current Ethiopian government inherited them, lovingly maintains them and has indeed refined their rural versions, peasant associations, with even closer controls down to the household level.

Like their Ethiopian equivalents one of the committee duties, in addition to the guaranteee of dictatorship, is forcing people to go to the dictator's speeches. Havana has its own Revolution Square and like the Revolution Square of Addis (designed by Polony of fraternal socialist Hungary in 1975 and now renamed Meskel Square) it is a totalitarian monstrosity ripped out of the vibrant heart of a city, whose only purpose in design was to celebrate dictatorship in mass forced rallies.

That is where Mengistu broke the bottle of blood on the pavement as a reminder of how much Ethiopian blood he was willing to spill to stay in power forever. After years of association with Communist mantras, military parades and terror, the site has had decent use made of it as a site for opposition rallies in 'election' 2005, the Bob Marley festival (that somehow forgot to mention Ras Tafari himself) and as a starting place for sports events.

Sure, the current Ethiopian government has abandoned the old style revolutionary rallies. However, just like not mentioning revolutionary democracy for the past year or so out of embarassment, it is a matter of convenience to convince aid donors (the imperialist camp) that they are really different. 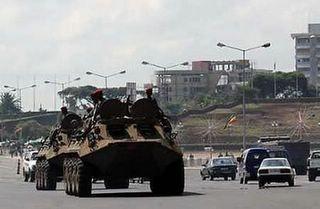 The Addis Ababa Massacre saw armored vehicles return to the square in force. Don't be too surprised if the fortress struggle theme makes a big comeback if party rallies make a return visit there soon and it is called Revolution Square again.

So ... we read an article describing a Castro speech where he warned of attempts against the life of his financier Chavez,

Castro, 78, boasted that he had survived at least 100 attempts on his life.

CIA plots against him included such capers as poisoned cigars, an exploding conch shell and toxin to make his beard fall out.

"This comes from a survivor. I have survived,” he said in a nearly six-hour speech that lasted into the early hours of Saturday.

Now dear reader, what was the interesting part of that passage? To us the whole thing is amusing even interesting but the most illustrative part is the term six hour speech .

What right does anyone have to make helpless people who have been forced to live with nonsense and despotism for forty six years, to stand up in a rally and listen to Castro or anyone else for six hours? Next we tried googling for even longer speeches and there were numerous references up to even an eight hour speech.

It is all a display of power and verbal game playing as though sheer volume translates into meaning and something of value. The 700 page book on the principles of revolutionary democracy was written in 2000 in the same spirit. It is postively Orwellian - repetition, fatigue, boredom, confusion accompanied by numbness, inherent threats and displays all set in to power serve to make language lose all meaning.

When someone controls language they control definition and eventually hope to control thought - or at least direct its expression. It seems that one of the PM's responses to crisis is to write and write and write, perhaps to convince the world that there is something deep or meaningful going on where there is only a ritual display of power.

In the run-up to the election NORDEM, the Norwegian Centre for Human Rights, which was familiar with the conduct of 'elections', had one of its representatives, Siegfried Pausewang, expelled. According to the Ethiopian government he was personally biased when the truth was that he simply knew too much and had said it out loud.

The EU went politely along with the government. Now, the ad hominem attacks on Eva Gomes are conducted with the same aim - to personalize the EU report so that its conclusions can be rejected along with her. This is to be done by sheer volume and thunder. It won't work ... right?

Ethiopians in general don't have to study the words (yet) but they live with their dire consequences. Party members and cadres everywhere certainly have to keep up because those are their talking points and familiarity with them is a necessary sign of loyalty.


As usual Weichegud hits this nail square on the head in Excavating the Excavator.

Yes, we know La Lutta Continua! is Portuguese not Spanish.