We don't need no votes! 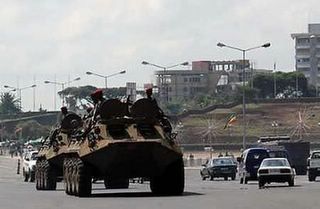 In the 1948 classic Treasure of the Sierra Madre, Humphrey Bogart's down and out gold miner is surrounded by bandits who are claiming to be federales ... he wants to see proof before he surrenders. The memorable response is

Badges?
We ain't got no badges.
We don't need no badges.
I don't have to show you any stinking badges.

Scathing reviews have closed the curtains on the Politburo Election 2005 Show early. It wasn’t supposed to be that way. After all, the revolutionary democratic path to victory, perpetual international legitimacy and cash had been so meticulously followed.

The American and Norwegian observers were kicked out. The European Union observers could not be too much trouble and the Carter Center knew what was expected of it. None of them would leave Addis Ababa anyway except for photo opportunities. The foreign press who could also be kept in line.

How about all those troublesome Ethiopians? Well they knew how to behave - or they had better because they weren‘t going anywhere and neither was the ruling party. If Addis Ababa was lost, it might even look good - the potential for sabotage of opposition attempts to administer the capital was simply too delicious.

Certainly all of the nations, nationalities and peoples outside of Addis knew what was expected of them - there were certainly no ferenjis around to know different. Fourteen years of revolutionary democracy could not be shrugged off so easily.

The opposition? It is not like they would mount a serious guerrilla campaign so why did they matter at all? As long as they played their part in the election show, scores could be settled later. The whole process could be repeated again in five years when the ferenjis want another election show before they signed more checks.

Despite the best laid plans of commissars and cadres ... the vote nationwide swung sharply against the government taxing their ability to manipulate reality for even the most unobservant watchers. Not a single place where observers were present was won by the ruling party.

When the election show fell apart the government made all of the right moves from their perspective. The protest ban made a Kiev / Beirut / Tbilisi type of mass protest a matter of law and order instead of a romantic popular movement that could attract favorable attention across the world.

Victory was proclaimed at every opportunity - aside from the baited trap set for the opposition by admitting losses in Addis. Opposition charges of fraud and abuse were met with the very same by the government and everyone played at an assumption of moral equivalency. The numbers were manipulated or invented outright and trickled out in a flake flurries of good news.

Then things started to go really wrong - as if the ballots of tens of millions of counter revolutionaries weren’t enough of a problem to deal with. The opposition was more determined than expected and showed tactical and strategic skill of unexpected quality. The EU observers who had been so cooperative started to complain of fraud and rigging.

So the domestic press was isolated further from political reality by being threatened about printing statements from the opposition. The stridency and temperature of official pronouncements towards the opposition went up as well - as though building up to the Dergue era shrill war cry of state terror - yefiyel wottette.

Then came the moment to take charge of the potential for protest. Students were troublesome anyway - after all the university is where the current government started out. Simply attacking them or manipulating their righteous protests at just the right moment led to a staged confrontation against the overwhelming power of authority. After that brutal hand of state force was shown - then who would dare march on Meskel Square?

Thus the election was forgotten and it instead became a season to restore law and order that the government itself had broken. All the while foreign reaction was measured and found wanting. In many ways it was better if everyone all over the world saw exactly what was going on - nothing from votes to foreign pressure would ever be allowed to change Ethiopian government. The sooner everyone got used to that idea the better.

By 2005 Mugabe really knew how to fake an election. He was so good at it that even though everyone knew he was hated nationwide - there was little in particular to point to as evidence of election fraud. Ethiopia’s government has certainly learned lessons for 2010 that are too late to apply now.

Next time inflating the turnout won’t be enough to give a margin of manipulation when statistical analysis and the need for timely reporting of results may be required for legitimacy. No assumptions will be made about accepting the party’s own propaganda at face value. Even more important it seems that the people number only a few thousand and the counter revolutionaries have multiplied to reach a total of almost 70 million suspects.

The people will have to be protected even more from all of those countless potential anarchists. Perhaps more calculated weakening and insecurity from humger and poverty will be enough to make them more reliable supporters. If not, then kebeles and cadres can metastasize further onto every square meter of land and crowd out every unapproved thought.

Most important of all, the party can never ease up on the enemy, no matter how many of them there are. Not for a moment can the vanguard party let its guard down again. The agents of reaction and imperialism are just waiting for the kind of weakness shown by trying to please those ferenjis for their dollars, euros and yen.

So they won’t say nice things anymore? So what? In the end when all those Ethiopians suffer even more, they will have to deal with us to get to help them at all. They’ll come running back , or they will forget anyway - really they want to forget.

'Elections' were bad enough to put up with and power sharing was certainly the consolation of fools. Not only had the opposition actually won, it was acting as though the politburo should actually step aside.

Arrest them, 'disappear' them, blame them all - the politburo defines reality - no one else. This is not some game, this is war and the politburo plays that game for keeps.

It is clear now exactly how to deal with 70 million counter revolutionaries. Never give them an inch.