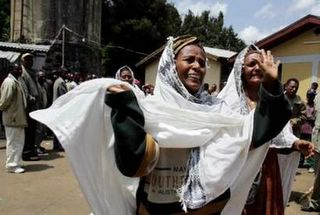 "A legitimate government"Family members of killed or 'disappeared' civilian protestors, courtesy of Yahoo/Reuters.

The information minister and spokesman for the ruling party, Bereket Simon recently said

the opposition was trying to overthrow a legitimate government in what he called a Ukrainian-style revolution.

How could it not occur to the propagandist in chief that most of his audience would assume that the democratic Ukrainian revolution against revanchist KGB thugs was a good thing? Here is another tragi-comic statement

What toppled the governments of eastern European countries were mainly the international broadcasters. We don't want that to be repeated in our country

How could it possibly not occur to the propagandist in chief that most of humanity thinks the overthrow of the totalitarian states of Communist Eastern Europe was a good thing?

Freud himself would be hard pressed to explain these clueless slips into honesty unless what is at issue is just plain cluelessness coincident with ruthlessness. Observers must wonder after the horror of recent events how the past years of government could have been taken seriously in any way beyond the ruling party's ability to wield brute force and terrorize.

In tragic concert with the rather obvious dishonesty and depravity of cadres and opportunists worldwide, the essential factor in approaching the subject of governance has been simply low expectations. Ethiopia's rulers, Mengistu and his heir Meles, have so debased history, communal relations, trust and morality in the service of their will to power for so many years that many forgot that they deserved better.

The catalogue of this government's infamy stretches back decades. It began with the capture of the Tigrayan people and the jealous struggle with the Dergue over who was most sincerely Marxist onto the past fourteen years of glib catechisms and pre-emptive vengeance against some 70 million rivals, both imagined and real.

The essential corruption and brutality of the Orwellian society thus created pretended to be many things. However, the thin tissue of lies binding that pretense together fell apart when the defining glue of violence at its core, long familiar to Ethiopians, became clear before the world.

What kind of government has so little regard for Ethiopians that it provokes and shoots them down in the street ... that it keeps them destitute so they can't resist ... that would rather see them be permanent beggars than masters of their own lives ... that would rather preen and dance for foreign aid than see a nation fill its potential ... that divides and rules and lies and steals and kills as naturally as normal humans breathe?

Homo Sovieticus is like the prostitute who believes that all women are whores because she is. Soviet man believes that the whole world is divided into parties and that every man is a member of one party or another, and that there is no real honesty. No one stands for the truth. And if anyone says he is above Party and is trying to speak the truth alone, he is lying.

Note that the expression of contempt, by action and policy, towards Ethiopians is a function of the revolutionary feudal aristocracy's self loathing that they assume all similarly, sincerely posess. Despite the very best efforts of the cult of Homo Sovieticus to colonize the Ethiopian mind through Mengistu's Scientific Socialism and the Revolutionary Democracy of Meles, their comradely lie now is exposed before the world for the evil at its core.

The most elementary understanding of events in Ethiopia requires the recognition that the Ethiopian government is Communist. This is a crucial point to make because Marxist-Leninist assumptions have long had a stranglehold on the collective mind. Even the manipulation of ethnicity has its roots in that same witche's brew.

The problem is not the abiltiy of Ethiopians to create a successful society but that the fatal flaw has been her leader's acceptance of national failure in exchange for power. The opposition is notable for its rejection of nonsense ideology and its embrace of common sense. They understand that Communism in any form guarantees the suffering of poverty and repression.

Which is exactly why dictatorships are so enomored of that ideology. Millions of voters clearly appreciated that it was time for the tired evil and idiotic ways of revolutionary feudalism to be buried forever ... but never forgotten. Along with the burial of TPLF legitimacy this struggle should mark the final end of the set of inhuman totalitarian assumptions that defined Mengistu and Meles.

The popular struggle against Communism and its neo-colonial class has been going on for three decades now and has been more costly than all the wars with Italy, Egypt and the other countless centuries of invasions. Freedom has always meant more than the dubious right to oppression by one's own.

It is time for an exorcism of that lethal nonsense. This beast will claim many more victims in its death throes but its days are now numbered. Ethiopians will remember who they have always been and not what they have been told to be at the point of a gun.