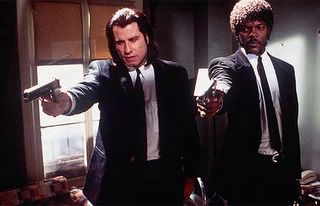 Vincent Vega & Jules Winfield, pictured above, are the pair of psychopathic killers at the very heart of one of our favorite movies, Pulp Fiction. The former is a heroin addict, who is always in the bathroom when something important happens. The latter, and by far the more interesting of the two, is an occasionally introspective high order sadist.

As if impending death is not bad enough, Jules wants his victims to spend their last terrifying moments on earth feeling that even God has forsaken them. Picture that self righteous thug, with his jerri curls dripping all over everything, pointing a rather large handgun while this fake Bible passage furiously rings out

The path of the righteous man is beset on all sides by the inequities of the selfish and the tyranny of evil men. Blessed is he who, in the name of charity and good will, shepherds the weak through the valley of the darkness.

For he is truly his brother's keeper and the finder of lost children. And I will strike down upon thee with great vengeance and furious anger those who attempt to poison and destroy my brothers. And you will know I am the Lord when I lay my vengeance upon you.

Escaping certain death, Jules waxes philosophical "I been sayin' that shit for years. And if you ever heard it, it meant your ass. I never really questioned what it meant. I thought it was just a cold-blooded thing to say to a motherf***er before you popped a cap in his ass".

Clearly, Jules is not a nice man. Indeed, any reasonable observer who disengages himself from Quentin Tarantino's seductive and cool dystopia for a micro-second will recognize a portrait of evil. Now imagine that you encounter the likes of Vincent and Jules but you can't just change the channel?

Men like Vincent and Jules run governments in some parts of the world. Ethiopians have known for some time the experience of intimate terror that thugs and psycopaths bring to innocent lives. For example, the catalog of horrors that Mengistu's rule brought on certainly had a sound track like a movie.

However, screams and cries managed to drown out soul and disco era cassettes that were mixed in with official hits of the revolution like "Without Bloodshed, Ethiopia Forward" and its rather quick replacement by that shrill herald of death, "Yefiyel Wotete."

"Yefiyel Wotete" was a terrifying war cry that accompanied the announcements of executions and purges of thousands of innocents. Here it is in Amharic (loud and fevered - c'mon use your imagination)

... translated into English one can get a partial sense of this monstrous chant that always accompanied death ...

The purpose of repeating this was to terrorize and it proved to be very effective. Most shudder upon hearing it today in a Pavlovian reaction that was its original intent. It was meant to disarm, to demoralize, to make its millions of victims feel bereft of all hope and chances to resist or survive without total submission to Mengistu and his cadres, the earthly representatives of Marx and Lenin.

Jules and Mengistu have a whole lot in common don't they? One big difference though, while Jules had to avoid the law, Mengistu was the law. He killed with pride and bold headlines to the thunderous applause of the Soviet Empire and progressives worldwide.

His heirs, the EPRDF, weren't so lucky because their side lost the Cold War. After they and the Dergue had fought it out so the last man standing would get to be the real communist, the USSR fell apart and was unable to transfer support to its newest minions.

Hey, they were all Communists weren't they? Every government like that has always guaranteed the misery of destitution and repression for the people it claimed to fight for - just look at a map of the world with a memory no more than a generation deep. Try it again with a historical memory reaching back a century and you will see rivers of blood and tears.

From the absence of private property rights to the total domination of society by a vanguard party at the service of a tiny revolutionary feudal aristocracy, the only difference between the plan the Dergue and the EPRDF had for Ethiopians is generally higher IQs (not necessarily a good thing) at the top of the new government.

Scrambling about for a source of cash, the new rulers had to play up to the 'rich imperialists' who would not tolerate open Pulp Fiction / Scientific Socialism type thuggish behavior. So Revolutionary Democracy was invented to beguile the West and to continue a tradition of revolutionary state terror ... in a more subtle fashion.

Over countless centuries Ethiopians have fought to be free of foreigners. Now, Ethiopians look to foreigners to protect them from their own leaders. Make no mistake, without ferenjis and their traditions of liberal democracy, Ethiopians under their current rulers would not even have a pretense of human rights and millions more would be dead and dying from want.

The New Jack Tribal Gangstas of Revolutionary Democracy differ from the Original Gangstas of Scientific Socialism because they refined "the old techniques beloved of paranoid totalitarianism: lie and bluster in public, arrest and torture in private".

That game did not carry over into the recent election loss so the politburo got in touch with its 'inner killer' and butchered, terrorized, imprisoned and tortured the innocent. All the while looking away from its bloody handiwork, back over its shoulder to see what the ferenjis do and insulting them when they try to protect Ethiopian lives.

They wanted to make sure no one inside or outside took the talk of democracy seriously any more ... no matter what happened or what had to be done they would never, never leave power ... basically, "pay attention, in case you ever again have any illusions, this is exactly what we are about."

You see, Ethiopians don't matter to the politburo. They are just bodies to build a pyramid of wealth and power with. Indeed, in pursuing Communist policies that exchange national poverty and repression for a secure place in power, the government resembles the fabled clans of evil beggars that mutilate each successive generation so that pity generates steady income.

Anyone who wants to help the sufferers has to deal with their masters, who by virtue of their brutality, must be taken seriously by the international community. Vincent, Jules and Mengistu never could have come up with a scam this sophisticated and altogether sadistic at the same time.

Every word you hear from the Ethiopian government and its cadres everywhere, is as sinister in its intent as the fake Bible passage from Jules and every action is as sincerely immoral as Mengistu's war chant.

One must know one's enemy. The Ethiopian opposition and the people do know their enemy and together they are paying a price for that knowledge and their rejection of it with their blood. 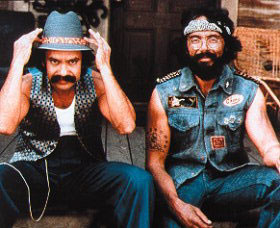 The EPRDF prefers that aid donors imagine the remake of "Red Terror" starring Cheech and Chong instead of Vincent and Jules .. but you know better.