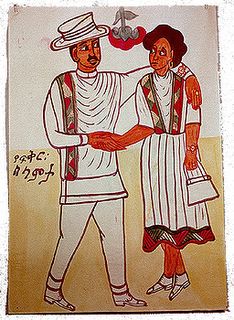 Greeting of Love, Tempera on Newsprint by Mengestu Gebre Michael from 1962

No explanation needed. Note the apple.

Maskal at Menelik's Court, Oil on canvas, Artist Unknown from 1962

This is a scene depicting King Menelik and Empress Taieku celebrating Maskal, which is a religious holiday in the spring. The highlight of the Maskal celebration is the burning of a tall bonfire, which consists of sticks of eucalyptus, tree branches, and tree trunks all tied together. After dark, it is burned as part of the Maskal celebration. The event is attended by the church and army, including dignitaries from the court, soldiers, and the Bishop. Some of the soldiers are wearing lion mane headdresses and shoulder pieces. The humble townspeople watch the court celebration on the very holy day. 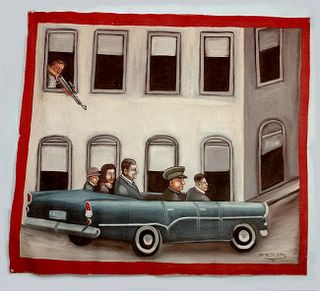 JFK was a well known and popular figure in urban Ethiopian visions of the US during the early 1960s.

Above paintings are from the Leavitt Collection of Ethiopian Folk Art

In 1961, Dr. Leavitt was asked by the United States Agency for International Development to assist in organizing a team of educators charged with the responsibility of founding the first university in Ethiopia.

Haile Sellassie I University was founded in 1962, and is now known as the University of Addis Ababa. Linden Leavitt arrived in Ethiopia in 1962, and remained there for nearly three years.

During that time, he made the decision to establish and develop a creative art center for the purpose of preserving the arts of Ethiopia, including Ethiopian painting. Dr. Leavitt began to assemble a personal collection representing various styles of Ethiopian folklore.